Chris Bumstead says that Breon Ansley should move up to the 212 Division, and reveals who his toughest challenge is in Classic Physique 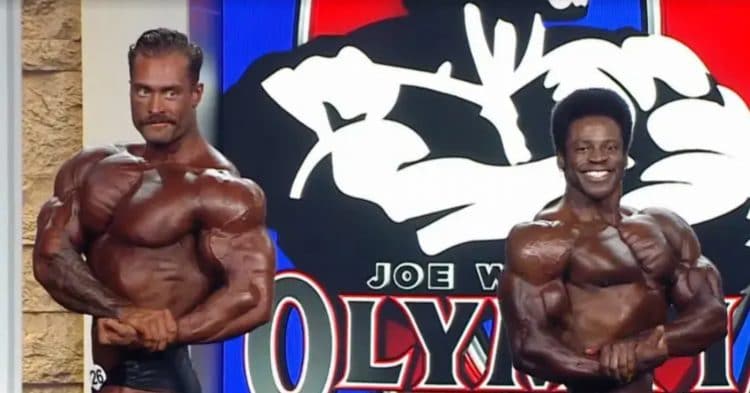 The rivalry between Chris Bumstead and Breon Ansley was one of the big talking points heading into the 2020 Mr. Olympia. Now that he got the better of Breon a second time, Chris thinks that it is time for Breon to move to 212.

When Bumstead won the 2019 Classic Physique Olympia, he beat Ansley by just a single point, stirring controversy in the sport. This led to a year’s worth of buildup between the two, as they each steadfastly believed themselves to be the better bodybuilder.

The time finally came for the 2020 Olympia, where they could prove this yet again. In the end, both men showed much improvements, but Chris would retain his title, as Breon dropped to third place behind Terrence Ruffin.

With things shaking out like this between Chris Bumstead and Breon Ansley, it makes one wonder what future competitions will look like for the Classic Physique champ. After all, Chris has made it clear that he plans on sticking around the division for years to come, racking up title defenses.

Speaking in a recent interview, Chris was asked who he feels will be his biggest challenge moving forward. While some may think that it could be the likes of Breon still, or maybe up and coming Logan Franklin, Chris had a different way of looking at it.

“I’m going to have to say the guy who came second (in 2020), and that’s Terrence (Ruffin). Obviously, we’re a much different physique, but I don’t think me being taller necessarily means that he doesn’t have a chance against me,” Bumstead explained.

“If he can fill out his frame a little more, Terrence’s posing is the best in the game. Nobody can beat him in posing, and that’s does play a part of Classic Physique. So I think that he easily could be a challenger, and he’s about my age too so he’s not done. He’s getting better and better every year.”

With that in mind, there still leaves an open question as to where Breon Ansley goes from there. Bumstead has an idea of what his next move should be.

Breon has been very vocal about the fact that he still feels like he has work to do  Classic. However Chris thinks it would be the right move for his rival to go to the 212 Division instead, following in the footsteps of the likes of George Peterson III.

“If he wants to stay he can stay, it makes no difference to me.”

Do you agree with Chris Bumstead, that Breon Ansley should move up to the 212 Division? Or do you think that he has more to offer in Classic Physique?