"The Butcher" goes through a punishing shoulder workout and shares glimpses of his current diet. 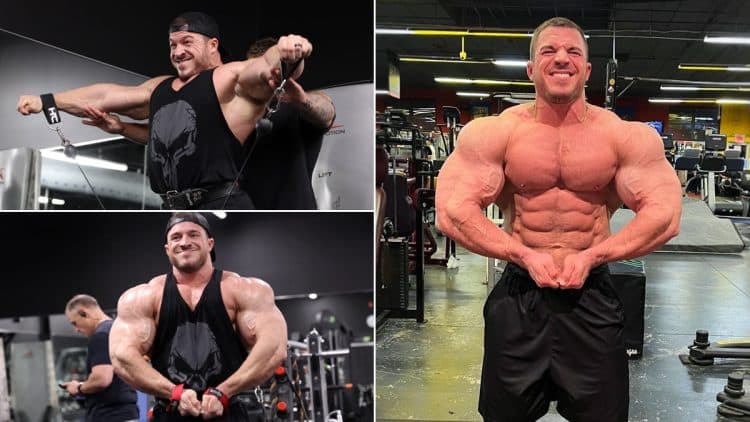 Brett Wilkin is leaving no stone unturned to earn a direct qualification for the 2022 Olympia. One of the highly touted prospects in the IFBB Pro League, Wilkin earned his Pro card in the Classic Physique division. However, he competed in the 212 division at the 2019 Puerto Rico Pro and the 2019 Toronto Pro Supershow, earning tenth and sixth-place finishes, respectively. Following the humbling performances, Wilkin took time off from competition and made his comeback in the Open division, earning a second place at the 2021 Chicago Pro.

However, Wilkin could not carry the momentum in 2022 and, despite huge expectations, had to be content with a sixth-place finish at the 2022 Arnold Classic. Wilkin is set to compete at the 2022 Romania Muscle Fest Pro that will take place between Nov. 11 and 13. Per the Olympia Qualification System (OQS), winning this show is the only way for Wilkin to qualify for the 2022 Olympia. As a result, he is pushing his limits and making each session count. Recently, Wilkin went through a shoulder day workout and shared an update about his current diet. The video of this session was uploaded on his YouTube channel.

Per the Colorado native, his training and diet are on track for the 2022 Romania Muscle Fest Pro. However, The Butcher revealed that he recently flushed out a lot of water and lost two pounds overnight. As a result, this was a ‘high day’ of his diet to compensate for the sudden weight drop.

Wilkin quickly went through the pre-workout meal, made his pre-workout drink, and headed to the gym for the shoulder workout.

Wilkin believes his chest is his strong point. Therefore he dedicated this entire training session to strictly working the shoulders and bringing them at par with his chest.

“I’m at that point where I kind of think about the workout the night before, planning it all in my head and writing it all down and then executing that day,” Wilkin said.

Wilkin started the training session with this movement to target the posterior deltoids. This muscle group is relatively difficult to activate and therefore, it is important to include rear delt-specific movements in your shoulder routine. Wilkin used cuff attachments instead of handles to do this exercise as it helps engage the deltoids without recruiting forearms.

He performed full reps at the beginning of each set and finished with a few partial reps at the end. After a few sets of this exercise, Wilkin took to the next rear deltoid movement.

This was the second movement of the workout to target the posterior deltoids. Additionally, the postural muscles of the upper back get a good workout with this exercise. The incline chest supported cable rear delt fly is usually performed with moderate weights and a high rep range.

Wilkin positioned himself on the bench so that his abdomen was pressed against the bench and his chest was off the edge of the incline bench. This stops the traps from taking over and helps focus on the rear delts to a greater extent.

After performing a few sets of this movement with a cuff attachment, Wilkin moved on to the next exercise.

After sufficiently working the posterior deltoids, The Butcher shifted his focus to the lateral delt head with this movement. While speaking about the exercise, Wilkin said:

“This is just activation. We really just feel the movement here. We get all the blood in the side delts here. Before we get into dumbbells or machines, these cables have been money. So I always suggest cable work to start, get that initial pump in there, and then finish off with something else,” Wilkin stated.

Wilkin performed a few solid sets of cuffed cable side lateral raises with slow and controlled movement and took to the free weight variation of this exercise.

Having worked with the cable machines in the first few exercises, Wilkin switched to free weights and performed seated dumbbell side lateral raises to target the lateral delt heads. While explaining the reasons for incorporating this movement and the technique employed, Wilkin said:

“Right now, in my position with six weeks left, I’m just going to do the exercise I know works for me… I feel the most out of those cables. Directly after that, I feel the most out of just the seated dumbbell raises. Mainly because with those cables, you’re taking out your hands as you’re only using the cuffs, so you’re only using your shoulders. With this, we’re taking out our feet so we’re only doing raises with our shoulders. Just eliminating the things that can take away from the movement…”

The Colorado native finished a few sets of this exercise and switched to working the anterior deltoids with the next exercise.

The Butcher took to this exercise next and lit up the anterior deltoids, which are one of the most important muscle groups in the upper body aesthetically. Wilkin pressed his chest firmly against a pad to avoid using momentum. He performed the first five reps of each set with a hammer grip and five reps with an overhand grip to hit the target muscles from a different angle.

The 35-year-old finished the shoulder workout with this compound movement on a plate-loaded machine. The shoulder press is one of the most basic shoulder movements that help improve overhead lifting strength. While the deltoids are the primary target of this exercise, the shoulder press also engages the pecs, triceps, and upper back to a great extent.

Brett Wilkin is a highly touted prospect in the Open pro division, and many experts consider him a future Mr. Olympia. However, Wilkin is yet to have his big moment on stage before he can be considered a serious threat to the Open division big dogs.

The Romania Muscle Fest Pro is five weeks away, and it is Wilkin’s opportunity to make a dent in the division. If he continues to adhere to his diet and training with the same intensity, the Romania Pro win is undoubtedly within his grasp.

You can watch the full workout video below, courtesy of Brett Wilkin’s YouTube channel: