The dumbbell front raise is one of the most commonly utilized shoulder isolation exercises that is used for building muscle mass. In this guide we've explained how to do it with tips, variations, and more. 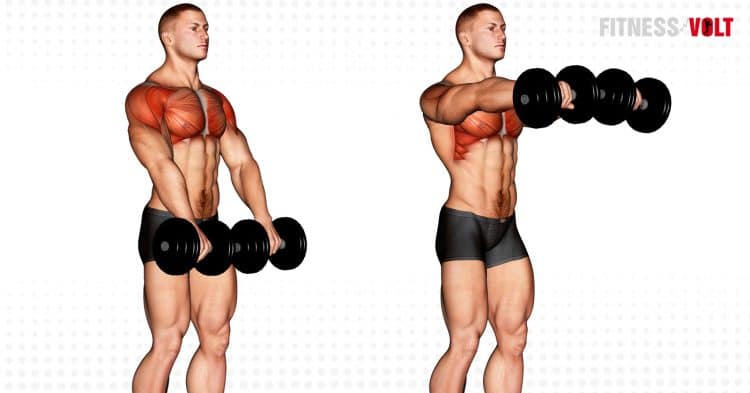 For many, the front delts are an overdeveloped muscle group and either don’t need much or any extra work because they’re involved in essentially all pressing exercises.

But for those who feel their front delts need a little more work, the dumbbell front raise is usually the go-to movement.

In this guide, we’ve explained how to do it with tips, variations, and more.

While the dumbbell front raise primarily works the front delts, there are other muscles involved too.

Also known as the front delts, this is the target muscle group for this exercise. The deltoid anterior works with the other two heads (lateral and posterior) to abduct the arm past 15 degrees.

The deltoid lateral or side deltoid head laterally abducts or raises the arm past 15 degrees while the other two heads stabilize the shoulder.

The clavicular or upper portion of the chest causes flexion of the extended arm.

The serratus anterior, also known as the boxer’s muscle is located above the oblique muscles. It’s responsible for the protraction (throwing a punch) and upward rotation (e.g., lifting something overhead) of the scapula.

How To Do The Dumbbell Front Raise

This is a rather simple exercise but to ensure you do it correctly, we’ve provided step-by-step exercise instructions.

Here are three variations of this exercise that we recommend.

Using a barbell for any exercise usually means that you can lift more weight overall. So you can really overload the front deltoids and build strength that will carry over into building muscle.

We recommend using a fixed barbell which is much shorter than an Olympic or standard barbell.

Here’s an article on barbell weights that we think you’ll enjoy.

Cables are a superior tool for shoulder isolation exercises such as the front raises, lateral raise, and rear delt raise. That’s because the constant tension of the cables keeps the shoulders in a stretched position

But to maximize this benefit, you must position yourself appropriately.

To do this, you’ll want to first attach a single-grip handle to the cable machine. Then, you’ll set up as you normally would by grabbing the handle by your hip.

Next, you want to walk forward until you feel a slight stretch in your front delts and then perform the front raise as you normally would.

When you do this using dumbbells or cables… it doesn’t necessarily matter. But doing the front raise on an incline bench places your shoulders under a similar stretch similar to the cables.

You’ll have to adjust the bench to find an ideal incline angle but the lower the bench, the more stretch you’ll get on the shoulders.

Avoid this exercise if you have shoulder issues though as it can place a lot of strain on the area.

How To Incorporate The Dumbbell Front Raise Into Your Training Routine

Because the dumbbell front raise is a shoulder movement, it just makes sense to do it alongside your other shoulder exercises.

Keep in mind though that bench pressing, shoulder pressing, and any type of press heavily involves the front delts. So, you may not need to do many sets and reps.

You’ll have to look at your front delts and determine whether or not it needs more work, although many times, it’s overdeveloped especially compared to the rear and side delts. It’s all about balance.

Read this Head by Head Guide to Deltoid Training for more information on properly training the shoulder muscles.

The dumbbell front raise is a staple isolation exercise for working the anterior deltoids and we have a feeling it’ll never go out of style – as this exercise was used by the Golden Era legends and well before that too.

Again, not everyone will need to isolate the front delts but for those who do, we hope this guide was helpful.