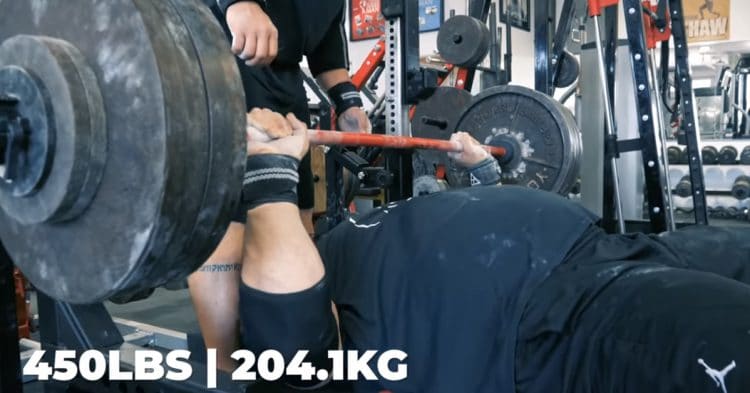 Brian Shaw is one of the greatest Strongman competitors of all time and after winning four World’s Strongest Man titles, he still has big ambitions… like aiming for a 701lb/318kg bench press. Shaw, like fellow Strongman legend Eddie Hall, has his own YouTube channel where he does challenges and shares his adventures/endeavors.

One of those was his $500k home gym that he finished in February of this year. So now he has the full setup that he’s utilizing to prepare for the World’s Strongest Man contest, take on his wife in an at-home workout challenge, and of course, achieve new bench press PRs on his ‘road to 701lbs’.

Although, the 2020 World’s Strongest Man event was rescheduled for November of this year due to the current situation. But at this point, things are very uncertain.

However, Brian Shaw is still training to be ready for when the time comes. Plus, his new goal will keep him sharp and it’ll be interesting to see how he progresses. Shaw recently achieved a bench press rep pr of 425lbs for 4 reps and it was a very productive session.

However, he’s looking to keep improving and subsequently, bought himself a new bench/rack combo from Rogue.

In the video, Shaw explained that he reached out to them and explained what he was trying to do. He didn’t feel too stable with the setup he had before and they hooked him up with a “showpiece”. And then it was time for the session, so Shaw and his training partner Tyler Stickle (105kg Pro Strongman) got straight into it and the 6’8″ giant explained everything as they went along.

So the goal was for them both to perform 40 reps (paused) in total by doing 4 reps per set. Shaw referred to it as “some type of bench cardio session” due to the number of reps. They both then built up to their working weights with Stickle using 405lbs for the session while Shaw stuck with 450lbs.

After the first set, both joked about there being nine more sets to go which would have most rethinking their decision to do something like this. But they were determined.

In between sets, they did lying rows with a barbell suspended from bands for eight reps each and a 2-second pause for each rep. Then a few more sets went by and they continued to poke fun at each other as they did throughout the session.

Stickle said Shaw’s reps looked easier so far but there were still several sets to go. Although it did appear as Shaw was getting the best of Stickle as the session went on, the latter explained. Stickle started to have trouble with the last rep while Shaw was still blowing straight through the reps.

This turned out to be the case for the rest of the session with Stickle needing a spot on his fourth rep for several sets while Shaw never once needed a spot. Shaw’s last rep looked a little funky but he got it up easily and joked afterward… “I got so excited to finish,  don’t know what happened there“.

Shaw was very happy with being able to complete the 40 reps… “I’m very happy about that, very happy“. But the training wasn’t over just yet because they still had to do some dumbbell presses, cable bicep curls, and finished with some bodyweight training.

Afterward, Shaw was visibly very pooped but was obviously pleased to have gotten through the session… “I’ll tell you what, that was crazy today. I said at the beginning of this that I was nervous when I wrote it up on the board and I was. I just took it one set at a time and it seemed like it was definitely a marathon getting through these sets.”

Stickle also felt great about the session although he acknowledged that 405lbs was a big weight jump for him. “Today was a humbling experience after last week (last week’s session)”.

Then Shaw explained how this session was planned to help him get over 600lbs. But he also loves the challenge he’s currently undertaking especially since it gives him a big goal during these difficult times we’re experiencing.

“That big massive bench is coming,” he explained.

We’ll be sure to keep you posted on Brian Shaw’s “Road to 701” journey, although it’ll probably be a while. But Shaw looked darn amazing in this session and he’s making great progress toward his goal.