Brett "The Butcher" Wilkin and Charles Griffen team up for a brutal shoulder workout where they focused on building the rear delts, side delts, and front delts. 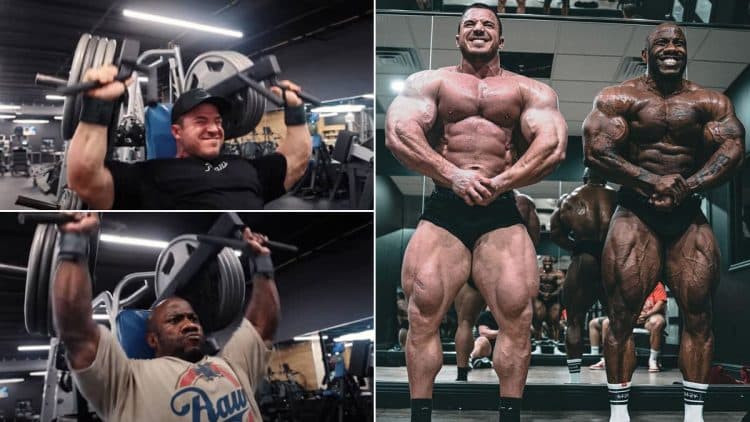 Brett Wilkin is a new school bodybuilder who quickly made a name for himself in the Men’s Open division. In a recent video, Wilkin teamed up with Charles Griffen to attack a strenuous high-volume shoulder workout.

Wilkin has been determined to reach the top of the sport ever since he began his bodybuilding journey. He cemented himself as a name to watch after earning his pro card in 2018 in the Classic Physique division. The bodybuilder decided to try his hand in 212 a year later. Wilkin took his physique to the 2019 Puerto Rico Pro next, where he managed to place 10th. Despite the unfavorable outcome, he competed at the Toronto Pro Super Show and placed sixth.

Instead of competing again in 212, Wilkin moved into Open bodybuilding. One of the more notable performances of his career came after placing second at the 2021 Chicago Pro. In 2022, Wilkin participated in the Arnold Classic back in March. While his physique updates were quite promising, the shredded challenger ultimately left the show in sixth place.

RAW Nutrition teammate of Wilkin, Charles Griffen has also led an exciting bodybuilding career thus far. He took third place at the 2021 Tampa Pro before taking the rest of the year off to build his physique. He made up for the lost time in 2022, performing at a handful of shows.

Griffen kicked off this year at the 2022 Indy Pro. While it looked like he was a favorite to win, rising star Blessing Awodibu brought an improved lower body and was crowned champion. In the end, Griffen took second place in an incredibly close battle. After almost earning his Olympia invitation, Griffen left no doubt with the judges at his next show and earned first place at the 2022 California Pro. With Olympia preparations on his mind, Griffen joined Wilkin for a shoulder workout.

Find a full list of exercises used in the video below:

*Reps were unclear based on the footage provided in the video

Brett Wilkin explained they are using wrist cuffs during today’s exercise because it helps slow down the movement to ensure the rear delt gets activated. He told Charles to make sure to squeeze through the top for the best results.

“Alright we’re rolling with Charles here. So, we got Charles in the house. We’re going to start here with some rear delts. We start with the rear delts, get some blood in there and in the back side of the shoulder. We’re going to work from the back to the front. So, rear delt, side delts, front delt, and presses at the end. So, we’re just going to go back to front and get as much blood in there as possible, and just volumize today.” Brett Wilkin shared.

Wilkin mentioned to Charles that keeping his arms as straight as possible will help work the rear delts.

“We’re going to stay high now. Still the same concept. Arms are straight. You’re going to use solely your rear delts to raise it out but now we’re just going to go from a different angle.”

Brett said he and Charles planned on sticking to high-volume training today. Wilkin added that they are practicing 50 reps total for this movement, in sets of 10, adding/subtracting weight following each set.

“Getting into the fun stuff now, the necessary stuff. Alright, so this dumbbell side raises, like I said before, bread and butter. Can do them seated but today we’re going do them standing. We’re just going to work up heavy here. Heavy but controlled. You’ll never see me go over 45, maybe 50. Not going to use the body, just the shoulders, and that’s how Charles does this as well.”

Proceeding with standing machine lateral raises, “The Butcher” favors this exercise because it doesn’t tax the lower body as much.

“We’re working back to front. Rear delts into sides. Keep the side laterals going. Now, we’re going to go to the pin loaded Cybex here. This is one of my favorite machines because it takes out your lower half so you can’t use your hips and swing it through.”

Wilkin and Griffen move on to chest supported dumbbell front raises, which Brett advocated for because it’s an exercise that takes momentum away from the lower body while properly hitting the anterior delt.

“In the past you’ve seen me do these. I’ll do five turns or twists, and then five straight on. Five turned, five straight on. Last time we did it seated, so this time we’re going to use a setup where we’re leaning into this bench. Again, taking momentum away from the lower body, so that way we can keep hitting that front anterior delt.”

Wilkin and Griffen continue the training session with a high rep set of machine shoulder presses.

“It’s more about just feeling the movement and rep execution.”

For the final exercise, Wilkin offered up a movement he hasn’t done in a while called six-way shoulder raises. It involves six different movement patterns and he added that it’s ideal for hitting every side of the shoulder.

“So, we’re going to do the six ways here. It’s been a while since I’ve done these. They are called six-ways because there’s six movements in one. There are six different movement patterns here. You’re hitting every side of your shoulder here. That’s why it’s good to do this at the end and go light.”

In addition to working with Charles Griffen, Wilkin has trained with three-time Classic Physique Olympia champion Chris Bumstead. The two teamed up in April for a grueling back workout. They exchanged tips and techniques during the training session, which took place roughly a week after Wilkin’s sixth place showing at the 2022 Arnold Classic.

As of this writing, it’s unclear when Brett Wilkin plans to return to a bodybuilding show but Griffen has already earned his Olympia invitation after winning in California. If their shoulder workout is an indication of Wilkin’s progress, the bodybuilder is on track for another exciting year in the sport.