Join the league of legends with the Dragon's transformation program. 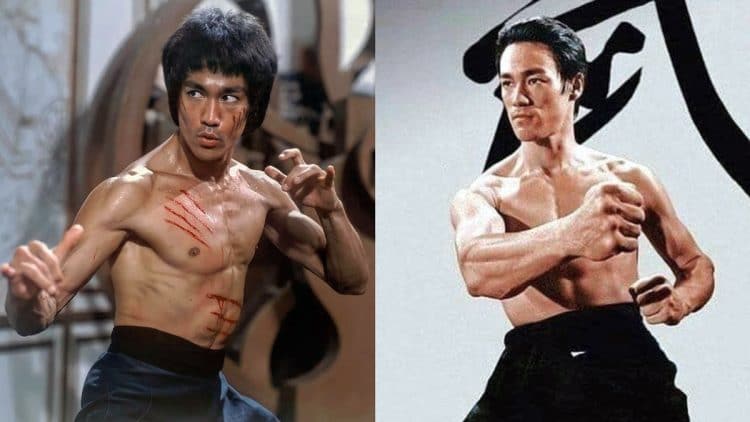 Bruce Lee is arguably the most famous martial artist of all time. Almost all of us have grown up hearing stories of his brutal training regimens and death-defying stunts.

Lee’s antiques with his nunchucks have a cult following of their own. He set the standard for actors of his time with his slender yet ripped physique.

Bruce Lee was the founder of Jeet Kune Do, a hybrid martial arts philosophy that is often credited with paving the way for modern mixed martial arts (MMA).

Jeet Kune Do is a “formless” form of Kung Fu based on the idea of attacking just before your opponent is meant to attack. This school of Kung Fu relies heavily on speed, something that Lee was a master of.

We would go as far as to say that martial arts would not have the same appeal as it has today if it was not for Bruce Lee.

Lee could be credited with bringing martial arts into the mainstream. Almost every action movie since the Dragon’s time has a martial arts fighting sequel.

Bruce Lee took the Asian fighting art international. He became the bridge between the east and the west. He made the fighting art so popular that even Britain’s number one spy, James Bond, has to employ his martial arts skills to fight off the bad guys in close-quarter combat. The cultural amalgamation does not get any better than this. 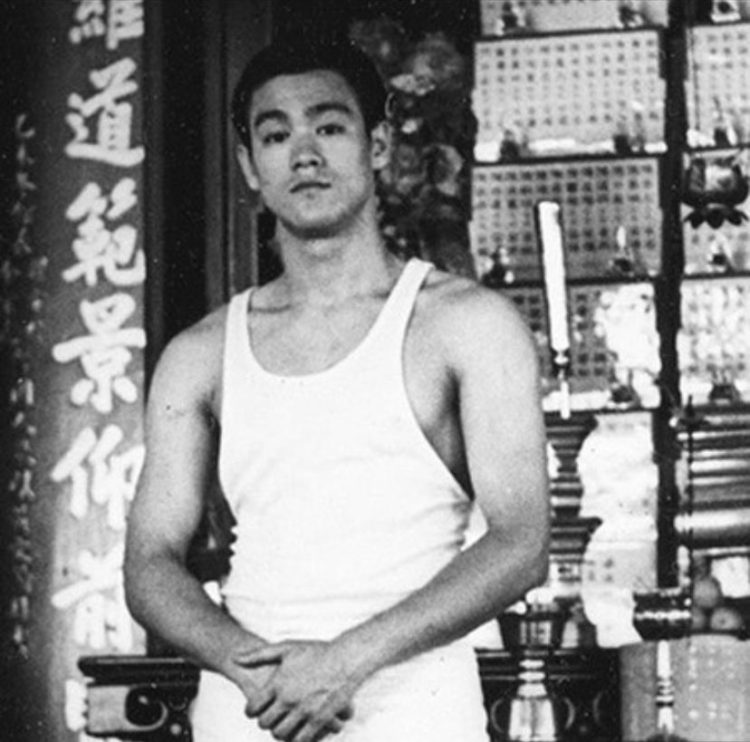 When it comes to training for skill, endurance, and muscle mass, Lee was way ahead of his time. Based on his writings, one can notice a clear progression in the martial artist’s training regimen.

In his early years, Bruce stuck to orthodox martial arts training. But with time, as he learned more about his strengths and body, he began including strength training into his routine.

Back in the day, while most martial artists focused purely on improving their fighting skill, form, and techniques, Lee took a different approach and started working on improving all elements of his fitness, including strength and muscle conditioning.

Lee included muscular and cardiovascular endurance, stamina, strength, and flexibility training into his routine. He went a step further and made classic bodybuilding exercises a part of his workout regimen.

However, he did not go Arnold Schwarzenegger on his bodybuilding training. He made sure his muscle gain would not interfere with his flexibility or speed. 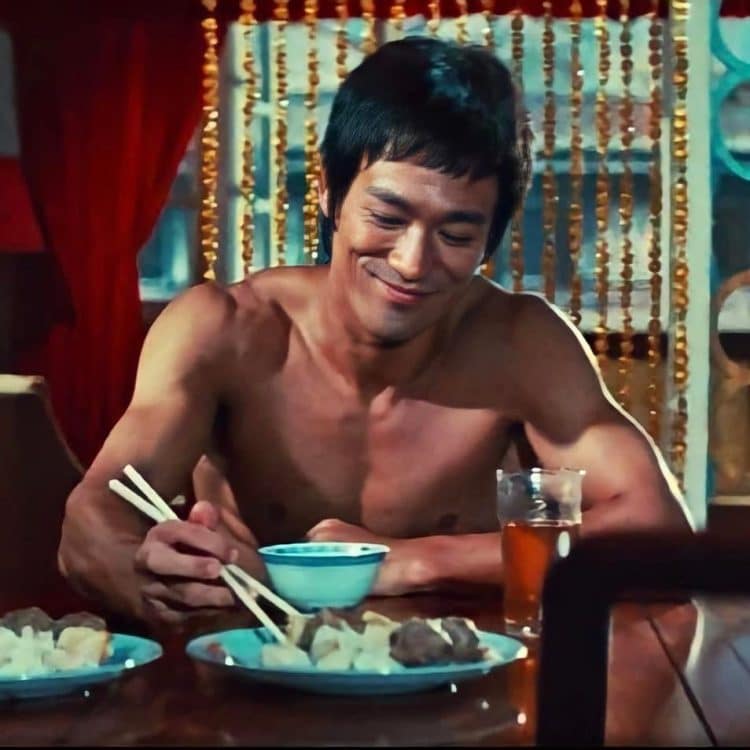 You cannot build a shredded physique like the master martial artist by hogging on junk food. Lee stayed away from refined carbs and sugar.

Lee realized the importance of nutrition early in his career and capitalized on it by following a strict diet plan.

Although Lee’s body fat percentage was probably in the single digits, he was eating enough calories that enabled him to keep up with his rigorous training regimen. Bruce looked like a cover model but was quick and deadly like a dragon.

Since Lee grew up in British Hong Kong, he had a thing for Chinese food. His favorite dish was beef with oyster sauce.

Bruce was known for experimenting with his diet and training. He added organs meats to his diet as they are a great source of protein, vitamins, and minerals.

Lee relied on rice and nutrient-dense vegetables for carbs in his diet. He was also an avid green tea drinker. Not only does green tea have antioxidant properties, but it can also lower cholesterol levels, reduce blood pressure and the risk of stroke.

Related: 12 Best Green Tea Brands On The Market Reviewed for 2022

Bruce Lee ate 5-6 small meals in a day. Eating smaller meals instead of three large ones helped keep his metabolic rate high throughout the day. A high metabolic rate helps burn calories even when you are not physically active. Here is what he ate in a day: 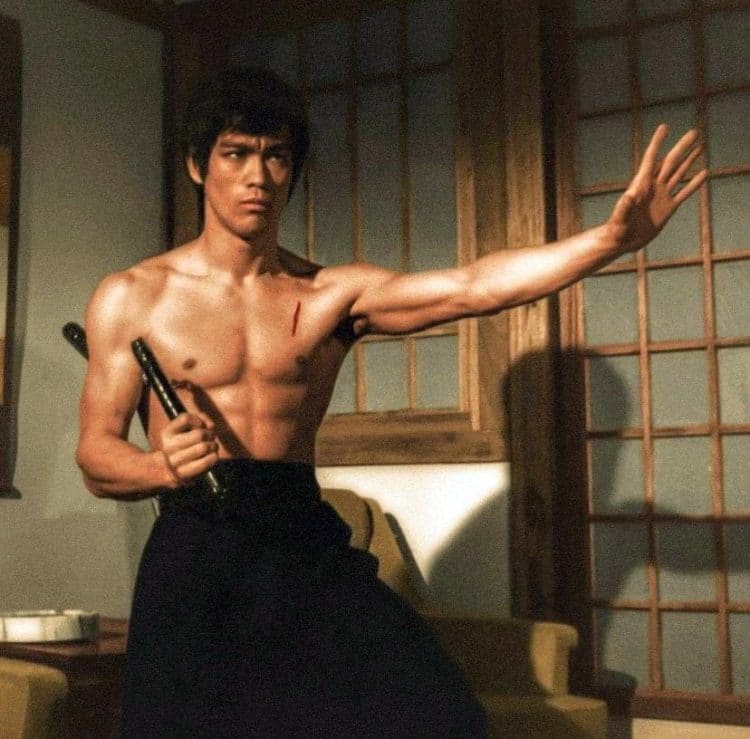 The Dragon took training intensity to a whole new level. His training is unlike anything we have written about until now. If reading this makes you feel jittery, you are not alone. What you are about to read will blow your mind.

Before we dive into Lee’s training program, here are the principles he swore by:

Although we will go over a few of Lee’s workouts, you need to remember that he did not stick to the same training regimen every day. The Dragon treated himself like a human guinea pig. He was always mixing up his training and diet for a way to improve his results.

2. Warm-Up is as Important as the Workout

Bruce Lee did not cut corners when it came to warming up. He learned this lesson the hard way.

The martial artist once injured his back while performing good mornings without properly warming up. This back injury troubled him throughout his career.

Lee was a fan of cardio. He believed cardio was a great way of warming up before a workout and improving endurance. Jump rope was one of his favorite cardio exercises. His typical cardio session lasted anywhere between 30-45 minutes.

Later on in his career, Lee supplemented his endurance workouts with circuit training. It helped him shorten his workouts while keeping the intensity high.

Bruce Lee has one of the most chiseled midsections of all time. Lee’s abdomen could be used as an anatomy chart. His peeled six-pack was the result of training his abs to failure.

Next Read: Abs Circuit Workout: Training and Nutrition Tips for a Six-Pack

Lee had a good habit of journaling his workouts. “The Art of Expressing the Human Body” lays out some of the martial artist’s training routines in detail. Not only does it mention the exercises, but it also mentions the weights Lee used.

This training routine tells us that Bruce Lee was a typical weight lifter when he was in the gym. Like the gym bros, he too went light on the squat but left no stones unturned while training his arms.

On the other hand, this training routine could also mean that he started his arm day with squats, in which case, it would be safe to say that Lee was a total badass – not that we doubted it in the first place.

Related: Gym Bro Test: Find Out If You Are The Next BroScienceLife

Some guys may not believe it, but I spent hours perfecting whatever I did.—Bruce Lee

The workout mentioned above is only a part of Lee’s training regimen. The martial artist trained seven days a week, and he would basically train the entire day.

Here is a week in the life of Bruce Lee:

If you were here to read about the Dragon’s bodybuilding routine, you will not be disappointed. Bruce’s later workout regimen was designed to help him build muscle mass. It mostly consisted of Olympic and compound lifts. Here is what Lee’s workout regimen looked like:

Being the visionary he was, Lee used supplements to recover from his training when they were considered overpriced and ineffective.

His supplement stack consisted of:

Most of these supplements today are not as popular as they once were. Research in sports nutrition has come a long way since the 70s, and you would be better off using tested and proven supplements.

Following the Bruce Lee workout is not everybody’s cup of green tea. It is not a matter of access as much as it is a matter of conviction. But at the same time, Lee himself would not have wanted you to follow his exact same workout and diet plan.

Lee was a proponent of constantly experimenting with your diet and training routine to bring out the best in your physique. Adopt elements of the martial artist’s transformation program, and make them your own.

The Kettlebell Figure 8: Muscles Worked, How To, Benefits and Variations