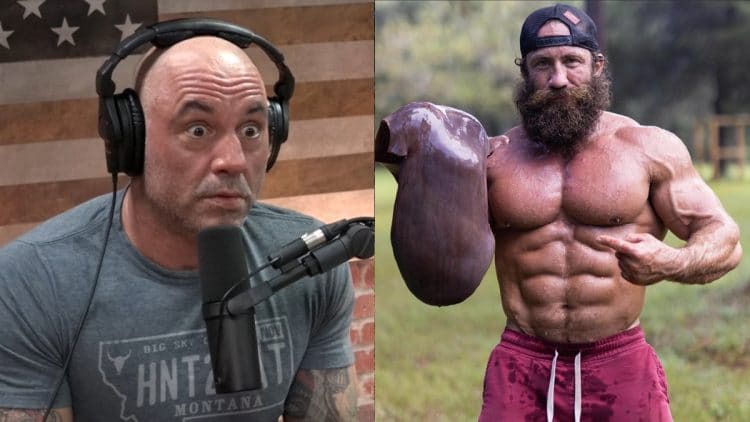 Hosting the most popular podcast in the world, Joe Rogan routinely has guests on to discuss a variety of topics. In a recent video, Rogan addresses social media star Liver King’s natty or not claim and speaks on the benefits of eating cooked meat over raw meat.

While Joe hasn’t competed in professional bodybuilding or powerlifting, he has learned the ins and outs of fitness while running his successful podcasting empire. During his time hosting the show, Joe has featured countless guests and varying sports stars like eight-time Mr. Olympia Ronnie Coleman. The purpose of his podcast is to have an open dialogue that resembles a normal conversation. These methods are how he is able to dive into topics that some people shy away from in traditional media.

On the other hand, Brian Johnson AKA “Liver king” became an online sensation in a different manner. Known for practicing his ancestorial lifestyle, Liver King adheres to a diet consisting of raw meat organs and prefers to live off the land. He states that he doesn’t use steroids but maintains his insanely jacked physique by consuming bone marrow and ingesting liver daily.

In a recent video on YouTube, Joe mentions that Liver King’s ancestorial lifestyle is a gimmick and that he’s far from all natty.

“No that’s a gimmick, that guy. He’s got an ass filled with steroids is what he gots. That’s not a natural body. That guy is shooting all kinds of shit into his system to achieve that kind of physique. There’s this guy Derek who’s been on my podcast before. He’s got this YouTube page, More Plates More Dates is his website.

More Plates More Dates, the YouTube page did a whole takedown, well not a takedown but an examination of this guy’s claims that he’s natural and that he’s living off the nine pillars of health and sustainability or whatever the fuck it is. Liver and testicles and drinking blood. It’s a gimmick.

Look, I don’t even know if there’s a benefit in eating raw meat. From what I’ve understood, talking to experts, there’s actually a lot gained from cooking because there’s more, because the protein becomes more bioavailable.” Joe Rogan explains.

According to Rogan and some of the experts he’s had on his podcast, benefits from eating raw meats are questionable. Conversely, Joe insists that cooking the meat results in the protein becoming more bioavailable for the body to consume.

But as far as like bioavailability, they think that human beings cooking meat is one of the things that led to our evolution. That it helped our evolution along, because we had more protein access. Rogan adds. Also, it kills off bad bacteria. So you can have a piece of meat that was on the outsides kind of funky, but you cook it and you can eat it.”

Joe believes cooking meat led to human evolution. In particular, Rogan believes rare-cooked meat can offer nutrients in the blood that might otherwise not be available. Though, he stresses the benefits of cooked meat by highlighting that harmful bacteria is killed during the process.

It appears Joe isn’t sold on the raw meat diet or Liver King’s claim to be natural.

While raw meat might have some benefits, Joe asserts that the body’s ability to absorb protein increases when eating cooked meat.