How many calories do you burn playing Lacrosse? 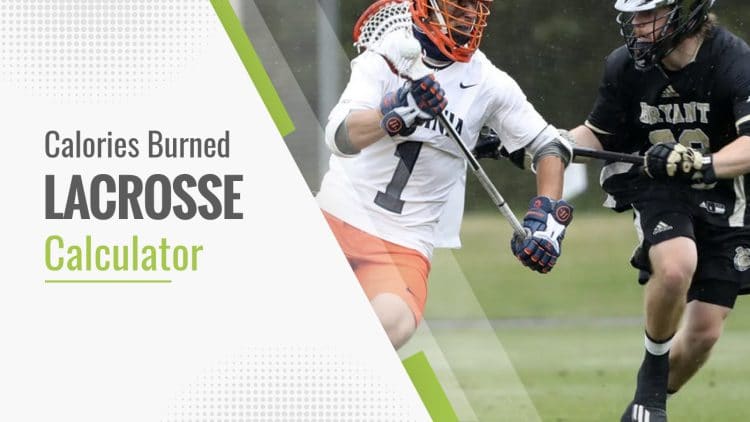 The average person weighing 160 pounds burns 610 calories per hour playing Lacrosse, the total calories burned depends also on the your weight and the intensity of your activity.

Lacrosse is one of the most popular sports for men and women that can be played at a variety of different skill levels. Since the sport primarily involves running up and down the field, there’s no wonder that it can be great for those that are looking to burn calories.

Lacrosse can be played and enjoyed by people of all ages. Many kids start playing lacrosse at very young ages and continue to play through their teenage years. Some that stick with the sport are able to play at the highest levels of NCAA sports, professional lacrosse, and even at the Olympic level.

Being a good lacrosse player requires you to be in peak physical condition, as the amount of running, sprinting, and all-around movement in lacrosse is very hard to sustain if you aren’t in top shape.

Using our lacrosse calculator to determine how many calories you’ll burn while playing the sport is easy and only requires a few steps. To calculate the number of calories that you’ll burn, just input your weight and the time that you’ve spent or plan to spend playing lacrosse. Then select your lacrosse activity and hit CALCULATE.

Our calculator uses MET values to give you an accurate idea of how many calories you can expect to burn while playing lacrosse and doing other activities. The higher the MET value that is assigned to the activity, the more calories you will burn over the course of an hour.

MET stands for metabolic equivalent, and these values allow us to give you an estimated expenditure of energy for many different activities, such as playing lacrosse.

So a MET value of 1 is the equivalent of the amount of energy you expend while at rest, and a MET value of 8 means you are expending 8 times as much energy compared to being at rest.

Most activities come with varying levels of intensity and have different MET values assigned to them. However, our lacrosse calculator has a single level of intensity with a MET value of 8.

The formula that our lacrosse calculator uses to determine the number of calories burned per minute is (MET  x  bodyweight in Kg  x  3.5) ÷ 200.

A person weighing 150 pounds will burn approximately 570 calories per hour from playing lacrosse. As we mentioned, this activity has a MET value of 8, which means that it burns 8 times as many calories as you would while at rest.

This is what the formula for calculating the calories burned while playing lacrosse will look like for a 150-pound individual at a MET value of 8.

Lacrosse is a team sport that is played by people of all ages across the world today. This sport is a face-paced game that involves teams of 10 or 12 players on the field at a time playing against each other. It is also one of the fastest-growing sports in the United States today.

The objective of the game of lacrosse is to outscore your opponents by shooting the lacrosse ball into the net that is guarded by a goalkeeper. Each goal that is scored typically counts as one point, and at the end of the match, whoever has the most points wins the game.

Men’s players are allowed to “check” each other, meaning the opponents are allowed to hit other players with their stick in an effort to cause them to drop the ball. In women’s lacrosse, checking will result in a penalty and is illegal to do.

Some other differences include variations in the stick sizes and other types of equipment as well as differences in gameplay and rules.

What Muscles Does Lacrosse Work?

Since lacrosse is by nature a very physical sport that uses many different muscle groups to play the game, it’s imperative to be in peak physical condition if you want to be a competitive lacrosse player.

Since almost all lacrosse players will be running while playing the game, the lower body is the muscle group that lacrosse focuses on the most. Specifically the glutes, hamstrings, and quads are the muscles that are used most frequently when playing lacrosse.

Other muscles that are indirectly used are the shoulders, biceps, and triceps that are used when a player shoots the ball into the net. In men’s lacrosse, many players have highly developed chest and upper body muscles in order to overpower their opponents and check them with a high amount of strength that causes them to drop the ball.

As with any running activity, lacrosse will utilize many of the core muscles as well in order to run at a high rate of speed and keep your balance in situations where you might get checked. The core muscles are also used when shooting the ball and a strong core is needed for a powerful shot.

Lacrosse is a great way to burn plenty of calories while playing a fun and challenging sport. You can play organized lacrosse through your high school or recreational leagues, or you can also play lacrosse just for fun and toss the ball back and forth with your friends on an open field or at the beach.

Other benefits of playing lacrosse are:

Since lacrosse burns so many calories while being played competitively, most of the health benefits that you get come from being so active and expending so much energy to play the sport.

The more cardio that you do for longer periods of time will increase your endurance and allow you to play lacrosse and do other similar activities for a longer duration. By using your lower body and core while playing lacrosse, you will increase your strength as well.

The most common pieces of equipment that is needed to play men’s or women’s lacrosse include:

As you can see, there is a lot of equipment that is needed not only just to play the sport, but also to protect you from sustaining injuries while playing lacrosse.

Does lacrosse get you in shape?

Lacrosse is perfect for anyone that wants to get in shape and pick up a fun activity that can be played on a team. Since lacrosse is a very intense sport that requires plenty of running, sprinting, and other movements, it is a great workout and can allow the players to burn a significant amount of calories.

What workouts are good for lacrosse?

The best workouts to do for those that are playing lacrosse are planks, jump rope, ladder agility exercises, and steady-state cardio and sprints. These workouts train the primary muscles that are used when you play lacrosse and they will make you a better player when done consistently.

Do lacrosse players do strength training too?

Although we’ve mentioned that lacrosse is a great cardio exercise, you might be surprised to find out that players at high levels of lacrosse are doing strength training very frequently to stay in top physical shape. Since men’s lacrosse is such a physical sport, you can find these men’s teams in the weight room very often.

How do I increase my stamina for lacrosse?

The best way to increase your stamina to prepare for playing lacrosse is to practice many of the movements and use the primary muscles that lacrosse uses the most. For example, doing plenty of cardio and sprint work will help to increase endurance as well as exercises for your core like planks and sit-ups.

By now you know that lacrosse is an intense sport that can be played by people of all ages and all skill levels. The sport is growing in popularity, which is causing more and more people to get involved in lacrosse.

Lacrosse is played by both men and women all the way up to the Olympic level, and the sport has differences in the gameplay and other aspects when comparing the elements and play style from men to women.

The muscles that you use the most in lacrosse are in the lower body due to the constant running up and down the field as well as the core muscles to remain balanced and adapt to any irregular movements that the sport requires. The upper body muscles are used frequently when a player shoots the ball and checks their opponent in men’s games.

In order to be the best and compete at the highest level of lacrosse games, you need to be in top physical shape by putting in several hours of practice each week.

Use our calculator to get an idea of how many calories you can expect to burn while playing lacrosse, and be sure to check out all the other calculators that we have to offer at Fitness Volt!