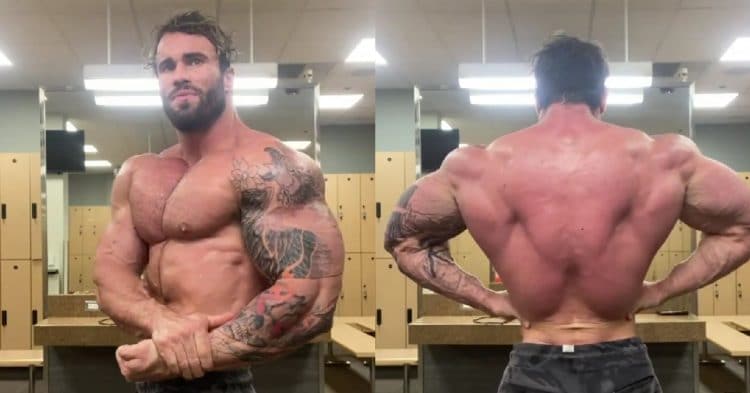 Fans have been buzzing over the competitive return of Calum Von Moger. With just a few weeks to go until this happen, he shared a posing update that sees him looking pretty trim.

It has been a long time since the last time Calum was able to step on stage. A long, seemingly never ending string of bad luck saw him face injuries and drama that has stopped him from being able to stay consistent with his training and competitive endeavors.

Now it seems that Calum Von Moger is gearing up for his long awaited return to the stage. He has been posting updates on his social media over the last several weeks, suggesting that he will be competing at an unnamed show in the near future. With about four or five weeks to go until this show, he recently posted an update to Instagram of him going through some poses, giving a clear look at his physique as he prepares for his comeback.

“Practice posing after workout. And no that wasn’t me shi–ing myself at the end 😂💩🥴”

As hilarious as the end of this video was, it does not take away from how impressive Von Moger looked here. He showed how lean he looks as he makes the change to Classic Physique competition. His back is looking wide and symmetrical, and his shoulders are round and large. It looks like things are coming together for him for this show.

There is not much known about what show Calum Von Moger is going to be taking part in. He has shared a few updates over the past couple of weeks, saying how close he is to competition, but he has yet to actually reveal what show it is that he is taking part in. The assumption is that he will be competing in an NPC show, and judging by the timeline he has set out in his updates, he will be back on stage in about a month. Other than that, and the fact that he is competing in Classic Physique, little is known besides the fact that he is shredded for this return.

Bodybuilding fans are likely just excited to see Calum Von Moger on stage again after all this time. It is going to see how his body looks on stage after recovering from such serious injuries, and people are definitely going to be watching to see if he is the same caliber of athlete as he was before.