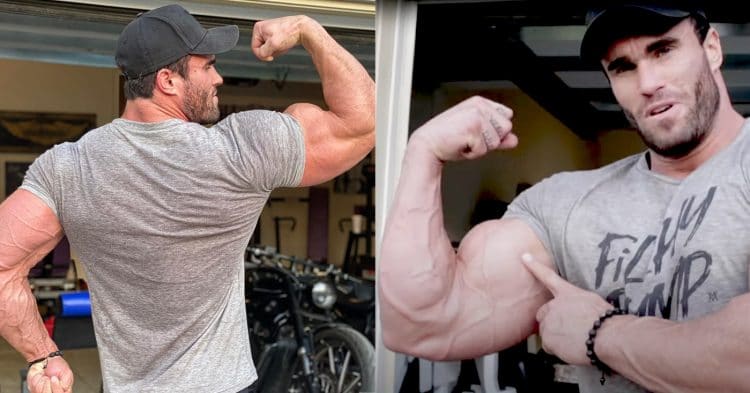 It’s safe to say that Calum Von Moger has had an interesting year. Then again, things haven’t exactly gone his way for a few years now with his many injuries. Not to mention, he learned that he’s a father to a baby boy which was completely unexpected.

But the 30-year from Australia has also been promising a come back to the Classic Physique division for a while now. And just when he was preparing for the Jay Cutler Classic earlier this year, Covid-19 happened, and threw everything off for many of us.

So, like many, he had to resort to home training, and has been sharing some of his routines.

Most recently, he posted a video to his YouTube channel titled, “How To Build Better Bicep Peaks,” where he offered his best training tips during a backyard/garage workout.

He mentioned that a lot of gym are still closed where he lives in California, and although a few are open, he just hasn’t made it out to any of them to train. So, he has been training at his home in the evenings when the weather is more bearable.

Related: Calum Von Moger Has A Super Hard Core Home Workout Plan For You To Try

Before the workout, Von Moger took a scoop of Sheila pre-workout from his supplement company Staunch, and then it was time to do some bi’s and tri’s.

Next, he grabbed his adjustable dumbbells and pumped out some standing biceps curls before doing more tricep overhead rope extensions.

He then gave some biceps training tips while he was performing EZ bar preacher curls.

“I’ll tell you a little tip with these bicep curls that I’m doing. See how I’m using 25 pounds on each end, it’s not a lot of weight”.

He explained that he used to do three of those weights on each end. However, that’s not always the best method, especially when it comes to training biceps or arms in general, which can also apply to other body parts as well.

“I can get away now doing this and the reason is because I do really isolated contractions, really isometric flexing.”

He demonstrated the movement and then pointed out that a lot of people curl the bar up fast and don’t focus on working the biceps. He flexes his biceps as hard as he can and controls the entire movement.

And, of course, he acknowledged the hard lesson that he learned back in 2017, when he tore his bicep while attempting a 400-pound barbell curl, with 2019 Classic Physique Olympia champion Chris Bumstead.

He also offered a few words of wisdom… “You can get a crazy pump and a good set of biceps by training smarter, not harder“.

Von Moger then shared some tips for seated alternating biceps curls which is an exercise that many people tend to do by using momentum, of which he advises against. He showed an example of how leaning back against something such as the preacher curl bench is better for helping to isolate the biceps because the arms are pinned back against it.

This also means using less weight because other muscles groups are not assisting as much or at all.

That concluded the arm session and there were pretty helpful biceps training tips in there for sure. Sure, a lot of it is common knowledge, however, it’s always good to be reminded of how slowing things down sometimes can be better for making gains.