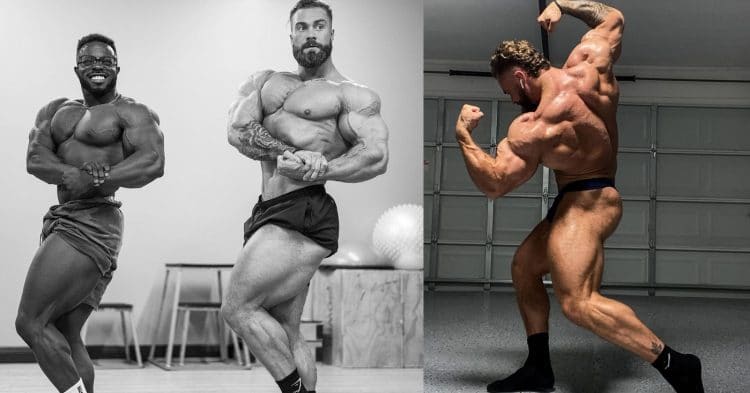 When they meet onstage in Orlando, Florida next month, Chris Bumstead and Terrence Ruffin will be battling it out for the title of Classic Physique Olympia champ. Ahead of this contest though, they are working together to better each other.

They say that iron sharpens iron, and that is what Bumstead and Ruffin were hoping to accomplish when they decided to team up, five weeks out from the 2021 Mr. Olympia. While Chris is the two-time reigning champ, Terrence gave him a run for his money by coming in second place, beating previous champ Breon Ansley.

Despite their competitive natures, the two put this away and joined forces for a video that Chris uploaded to his YouTube channel. Although Chris made it clear that there will still be a little bit of that same energy, being kept while they work legs in the gym.

“It’s our first time training together, so we’re going to have a lot of fun. He’s coming down with his coach, he’s going to run the workout, put me through it. And it’s leg day, so we have a chance to f—king but egos and measure d—ks, and see who’s going to train harder,” Bumstead said.

After getting to the gym, Chris Bumstead meets up with Terrence Ruffin and they get to work. First there is some stretching and warm-ups before the actual workout begins.

The whole session is captured pretty well in the hour long video, where you can see Terrence’s coach Joe Bennett put the two men through the rounds, doing the work with them. From leg curls, to the leg press, squats, and more, the men hit all the stops on a hard day of leg training, while Chris and Terrence trade friendly banter and conversation.

Following the leg workout, Bumstead and Ruffin work on some posing, which is a speciality of Terrence’s. Ruff Diesel was even seen working on his posing technique and giving a posing lesson with legendary bodybuilder Lee Labrada recently.

“It was a great workout. I always love training with other people who can put me through it, because you don’t have to think, you just get run through a workout,” Bumstead said.

“You’ve got so many styles of training, and it’s always good to work with someone smart, and some competition. Some friendly competition. You guys know that me and Terrence have had a sick little rivalry onstage relationship, respectful. He’s killing it, we’re just having fun up there.”

It is cool to see people like Chris Bumstead and Terrence Ruffin, who are the biggest of rivals onstage, work together and help each other off stage. It just goes to show that, at the end of the day, this is as much a fraternity as it is a competition.