Two-time Classic Physique champion Breon Ansley talks about preparation and improvements for the 2021 Olympia and possibly competing in 212. 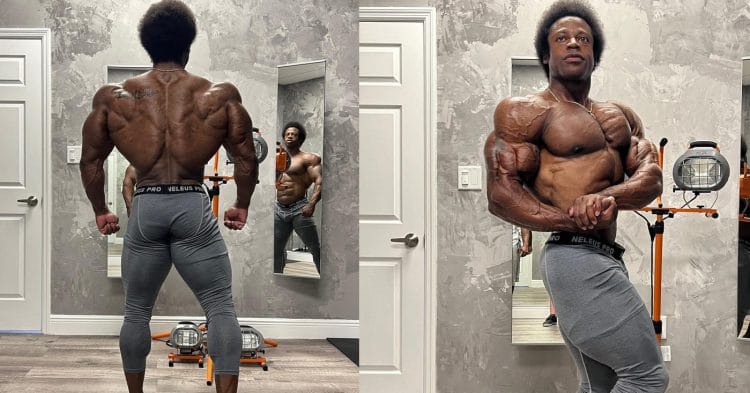 We’re just a day away from the start of Olympia weekend taking place October 7-10, 2021. Before he steps onto the biggest competition stage, Classic Physique Olympia champion Breon Ansley and his coach/legend Chris Cormier recently sat down for a video chat with Ron Harris of the Ronline Report (Muscular Development).

They discussed a range of topics including Breon’s prep, competing at the Olympia, and things viewers would be intrigued to learn about him.

At the beginning of the interview, Ansley pointed out his lean diet face that was close up to the camera. So Ron asked if he felt he could step on stage right now. His response to that was “I’m ready to go, I can step on stage now but now it’s a wait thing.”

He mentioned being about 3-4 pounds overweight currently but he’ll pull it together when the time comes.

Leaving LA for San Diego To Prep With Chris Cormier

“The Black Swan” left his home near the Los Angeles, California area to be with his coach Chris Cormier six weeks out from the Olympia.

According to Breon, it’s allowed him to focus on doing all the necessary preparations and intensifying everything from training to posing, and the mindset.

“So that way you’re alleviating all the different stresses of everyday life, looking at bills on the table,” Cormier added.

Although Breon jokingly responded by saying he was looking at any bills, getting out of your comfort zone is really the best way to get prepared for an event of this magnitude.

Taking The Title Back and Considering Moving To 212!

But just a year later in 2017, “The Black Swan” was crowned Classic Physique Olympia champion and he went on to repeat in 2018.

His reign as champ would end at the 2019 Olympia after losing to eventual two-time and current champion Chris Bumstead. He was runner-up in 2019 and moved a spot down to third after the 2020 Olympia.

After going from champ to last on the podium, he and coach Chris knew they had to make some adjustments to get back to the top.

Cormier mentioned that Breon was pretty heavy before last year’s prep. He got up to nearly 230 lbs and had to cut almost 50 pounds just to make 180 lbs stage weight.

“Looking at last year I was thinking we have to make some adjustments, we got to keep a tighter lid on the diet year round,” Chris explained.

As for improving his physique, Breon already has the muscle but there’s always room to get better in certain areas so they worked a lot on his glutes, lower back, and some other areas that they needed to improve.

It was just about “refining and polishing” as Chris said. They also worked on the posing aspect.

Ron brought up the possibility of Breon moving to 212 lbs as many think he’d do well in the division including the current 212 champ Shaun Clarida.

Not to mention, his body naturally wants to be heavier which makes it harder to get down to 180 lbs and have perfect conditioning.

However, it’s clear that the Cali native has unfinished business in the Classic Physique division but he’s not opposed to the idea of taking on new challenges as he explained.

“I needed to hit it 1000% before I even thought of moving up a new weight and moving up another division and that’s what we will do this year, hit it 1000%, and then once I put myself in the best position possible to get the title back then we’ll see about taking on new challenges like that.”

This time around, Ansley says he weighed no more than 205 as opposed to last year when he had to shred nearly 50 lbs.

So when his prep for 2020 Olympia started, he reached a bodyweight of 190 lbs rather quickly he explained. But because his body wants to add muscle tissue, it’s still not so easy.

“It’s still a challenge because you’re adding new muscle tissue and the weight gets a little stagnant, sometimes it might climb a little bit. So you got to just keep pounding the cardio because there’s added tissue especially during this time when you’re well-rested when you’re training with Chris, the type of training we’re doing, you’re definitely putting on some muscle.”

He’d been in the 180s (lbs) for almost 9-10 weeks and doing two hours of cardio every day just to keep his weight down.

Regarding the preparation and training for the Olympia, Chris and Breon are working more on the details and they went through eleven rounds of posing recently which was admittedly challenging for him.

But he understands what needs to be done to give him the best possible chance at having the advantage on stage.

“That’s what’s going to have me unfazed when it’s game time, when I get on stage, and when they really want to compare us which I’m expecting them to.”

So now the focus has been on amping up the intensity and focus, training with shorter rest periods, and “putting the pedal to the metal“.

Breon Ansley Is ‘Hungrier Than Ever’ To Win 2021 Olympia

What Breon Thinks Will Get Him The Win

Ron Harris asked Breon Ansley what he needs to get his title back and followed it up with “I know you want that title back“.

Breon concurred and followed that with, “I think for me it’s going to be about density look, a detailed refinement look“. He mentioned that they all have muscle and shape.

“For me it’s going to be the conditioning, the detail, the refinement, and the density, is going to set me apart, like it has been and I think that will be enough to get another win.”

The posing portion of competition is something that Breon has apparently said he wants to make better.

Ron was curious to know how Ansley, an already good poster, could improve in that area.

“I have a hard time figuring out how you could get any better than you already were,” Ron added.

Breon’s response… “Just in certain poses, to really stand out and to really accentuate what we’re trying to showcase and just adjusting some things.”

Chris Cormier also chimed in, explaining that Breon has a lot more streamlined physique this year and that because there are taller and shorter guys, the show has to be judged overall and not like the Open where the physique is really what counts.

This is the Year!

Harris brought up the fact that Breon has said he’s never felt 100% percent and there’ve been many times where he’s appeared flat.

But The Black Swan is confident he’s the best he’s ever been this year.

“This is the year that I will be 1000%,” Breon proclaimed. “Just want another title. I think we’re good enough to get another title this year. I just can’t wait to showcase.”

You can watch the full interview here.

We wish Breon Ansley and all of the competitors the best of luck at the 2021 Olympia. The Black Swan coming for the title once again but it’s not going to be easy with Chris Bumstead and other competitors standing in his way.

Make sure to stay tuned for updated and coverage of the 2021 Olympia.

BREAKING: George Peterson Has Passed Away