Chris Bumstead made the most of his time off from training but he's getting back into the swing of things with a deadlift and complete lower body session. 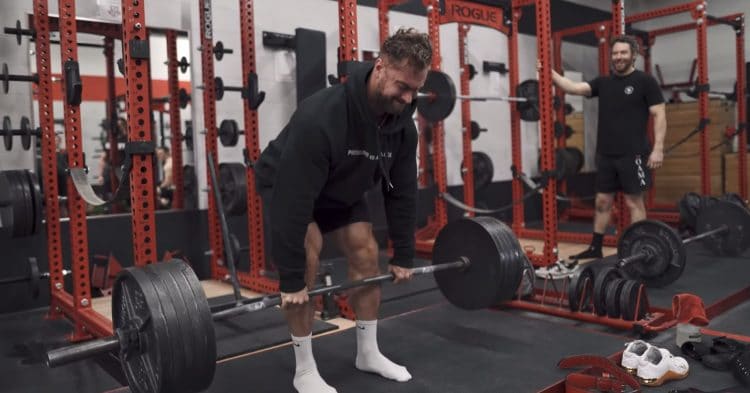 After winning his second consecutive Classic Physique Olympia title last year with a perfect score, Chris Bumstead eased off the training for a bit but now he’s easing himself back into his champion-caliber routine. In a recent deadlift session posted to his YouTube channel, Bumstead explained that he hasn’t done this movement in about seven months, however, that changed. It was also only the second time he trained hard at the gym since December. So you could imagine the discomfort he was feeling.

Related: Chris Bumstead Returns To The Gym For First Shoulder Session Since 2020 Olympia

Before getting into the heavy weights, he and his training partner Axel warmed up with some leg extensions and hamstring curls.

Before the deadlift session, he was asked about his max deadlift weight of which he responded 300 lbs but probably more like 400 lbs max. Although he did appear to work his way up to 495 lbs in the video.

He also mentioned pulling 705 lbs as the most he’s ever lifted when he was about 22 years old, and he hopes to get back there again one day.

In between, Bumstead discussed his micro and macro goals explaining that although he loves just going with the flow, he needs more structure in his training to stay organized and not skip anything such as squat and deadlift workouts.

His macro goal is to “be the greatest Classic Physique competitor there ever was“. In other words, he wants to have icon status.

But will he ever be totally satisfied? He admits that he probably won’t.

“I’m going to have to be realistic and step out when it’s the right time to do and when I want to. And I’m already understanding that I want to step out while I’m on top and not push it too far past that“.

He’s still much too young to even think about retirement though and he was fortunate enough to have started young, earning his Pro card at 21 winning his first Olympia title at 24. So he has a long way to go from here.

The champ still believes he can be a lot better though and he’s doing whatever he can to make improvements.

After deadlifts, they did some hamstring curls and then moved into the leg press (single-leg) where they went pretty heavy.

Bumstead said his off-season started about a week ago but before that, he wasn’t doing much, just a few light sessions per week and eating a little bit. But now he’s starting to ramp it up with more intense training and more calories too.

He’s gained a few pounds as a result and acknowledged that it’s a bit harder to breathe especially training with this much intensity, but he’ll eventually get used to it.

“I have the lungs of an 80-year-old smoker right now.”

The next exercise was the weighted Bulgarian split squat and if you’ve ever done these, then you’d know that no matter the order in which they’re performed, it’s not for the faint of heart.

For the next exercise, they did an intense leg extension finisher that they also use to pre-exhaust their quads before a session. It involves choosing a heavy weight, doing ten reps with it, and pausing for one second at the top. They’ll then rest for three seconds, do ten reps, and then a double drop set… sounds brutal!

The last exercise of their leg workout is the seated calf raise.

That was a wrap for the deadlift-focused workout session! It was the first leg workout video for his offseason and Chris Bumstead said he’s feeling strong and good right now compared to last year. He’s coming for that three-peat!

Also read: Chris Bumstead Denies Rumors Of Open Move: ‘My Only Dream Is To Be A Longstanding Classic Physique Champion’

Watch: Rafael Brandao Back at Dragon’s Lair Gym To Train With Flex Lewis