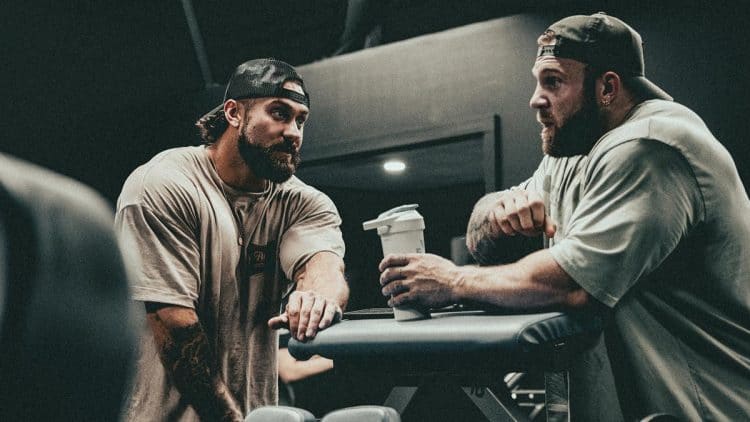 Remaining busy and committed to improvements in the off-season, Chris Bumstead and Iain Valliere routinely join forces to push each other inside the gym. In a recent YouTube video, Bumstead and Valliere demonstrated a series of demanding leg training workouts.

Bumstead has emerged as one of the most dominant Classic Physique champions to ever take part in the sport. After back-to-back runner-up appearances at the biggest show of the year in 2017 and 2018, “C-Bum” learned from his mistakes and returned to Mr. Olympia, winning the Classic Physique title in 2019. After winning Olympia once, Bumstead has worked relentlessly to make sure the title stays with him. Now, a three-time Classic Physique Olympia champ, Chris understands the ins and outs of the sport like few before him.

Iain Valliere had an impressive bodybuilding season last year. He took his physique to the 2021 Arnold Classic but ultimately landed in second after being outmuscled by Men’s Open champion Nick Walker. Despite the unfavorable result, Valliere is focused on preparing for his 2022 season in the sport which is set to kick off in July at the 2022 Vancouver Pro.

The pair of bodybuilders touched down at Revive Gym in Stuart, FL. to get in a brutal leg workout.

In usual fashion, Chris and Iain decided to start on the adductors machine to loosen up their muscles and warm up. The light resistance offered by this movement warms up the thighs for more strenuous exercises. All of their sets for this exercise were not shown, but it looked like each stuck to around 10-15 reps, which is enough to fatigue the muscle fibers without putting too much pressure on the joints.

For their second exercise, Iain and Chris moved on to leg extensions, which is an ideal movement for isolating the quad muscles. Chris and Iain said they are splitting up training the quads and hamstrings as they plan to train those later in the week.

“9 weeks out Van Pro (for Iain), going back to Canada to for his first Pro show. He’s peeled, he’s strong, all that good shit. I’m fat, weak and all that other good shit. We are going to hammer some legs. This is purely a quad day. Hamstrings later on in the week.” Chris says.

One of Chris’ sets was filmed in completion which saw the three-time Olympia champ annihilate 15 reps as well as a couple of partial reps. On the other hand, Valliere hit at least 20 reps with seven plates on the Prime machine. In response, Bumstead hit another 15 reps and a couple of forced reps before ending his set.

“For anyone wondering why I’ve been doing this one too. I find this one is just the easiest for me to get the most amount of deflection with the least amount of strain to my back and my ankles.” Iain explained.

One of their more demanding workouts came courtesy of the hack squat machine. Bumstead loaded seven 45-lb plates and fired off 12 reps first, wearing knee sleeves and a lifting belt. Conversely, Valliere hit 20 reps. After Iain was finished, Bumstead went for another 11 reps with the same weight before his brother-in-law spotted him on the final 12th rep.

“I need to do a little more” Chris says.

Bumstead adds a few more weight plates in between sets.

Their fourth movement took place on the leg press machine. After adjusting the settings on the machine to suit their specific training styles, Bumstead opts to go first. Pushing the envelope, Bumstead reached failure after eight reps. After “C-Bum” finished, Iain can be seen performing a total of 12 reps. Chris and Iain hit three sets in total.

“That’s why I like it, full knee flexing positions.” Iain added.

The fifth movement consisted of one set each until each bodybuilder reached failure.

“So, it’s easiest at the beginning, a little harder at mid, and then hard to lock out to where you’re kind of weak coming out of the whole and you have to blast out of the whole. At the very end, there’s a quad push because it’s quad day. Just to strategize using the fancy equipment.” Chris said.

“When I was pushing (my legs) I feel like they were opening up, I’m getting deeper. I can keep my knees in front of me.” Bumstead added.

For the final exercise, Bumstead trained his calves with a couple sets of straight-legged calf raises on the leg press machine. According to Bumstead, performing vacuums while training has helped immensely with him keeping a tight waist. Finishing out the routine, Bumstead hit three sets and a drop set, before calling it a day with Iain.

Set to make his 2022 season debut, Iain is preparing in a methodical manner for his next big bodybuilding show. After hitting a brutal leg day workout with Bumstead, it’s safe to say Chris and Iain are pushing the limits while preparing their physiques for upcoming bodybuilding shows.