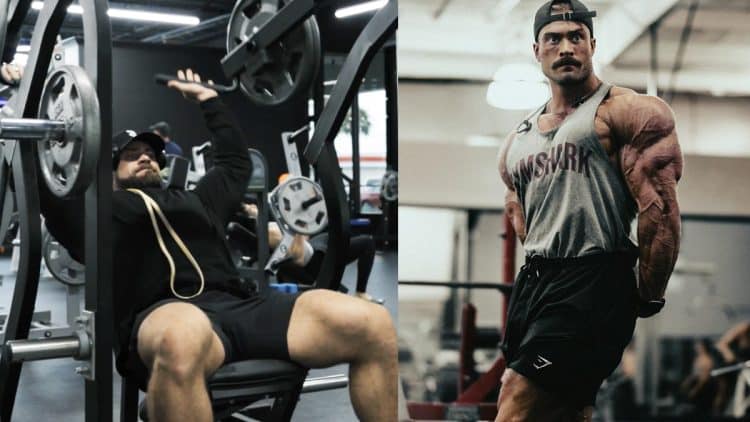 When you have big shoulders, everything is easier for you, from lifting weights on a bench to doing handstands and so on. Most importantly, they help you taper your torso and give you more power in the gym and on stage. Developing broad shoulders is important for aesthetics and functionality. Chris Bumstead recently shared a punishing shoulder workout that will help you achieve both objectives.

The reigning champ will attempt to secure his fourth Classic Physique title at the 2022 Olympia when the Superbowl of bodybuilding returns to its home in Las Vegas on Dec. 15.

After gaining the necessary muscle mass during the off-season, Bumstead has started his competition prep for the 2022 Olympia. Recently, he went through a punishing shoulder workout as part of this prep. The video of the session was uploaded on Chris Bumstead’s YouTube channel. So without further delay, let’s look at the session’s detailed account.

CBum started the workout session with machine lateral raises to work the middle deltoid heads. Machines keep the muscles under tension throughout the range of motion, which help bring about hypertrophy more effectively.

“I’m starting with machine lateral raises to get constant tension from the machine rather than dumbbells. I’m going to pre-exhaust my delts here…” Bumstead said.

The 27-year-old performed a few sets of this exercise and then jumped on to the next one.

Bumstead next took to the seated shoulder press on a plate-loaded incline machine. CBum initially wanted to do this exercise on a Smith machine. However, he chose the shoulder press machine due to the rush hour at the gym.

After the warm-up set with one plate on either side, CBum did the working sets with four plates on each side.

Bumstead performed this exercise with the traditional pyramid training principle. In this method, the first set is performed with relatively light weights. However, the weight increases for the subsequent sets while the number of reps decreases.

After performing the four sets mentioned above, Bumstead jumped to the next exercise.

Bumstead went back to this compound overhead pressing movement that builds upper body strength. Performing this exercise on the machine significantly reduces the chances of injury as the weights move along a fixed trajectory, eliminating the need to control them during the movement.

“I’m trying to do a wider grip than normal so it’s putting more tension on my delts… And pause at the bottom for the first five reps… So I am going to spend more time under tension and fire up the muscles. It’s a lot harder, but it feels good,” Bumstead said.

CBum cranked out a few sets of this exercise and shifted his focus to working the anterior delts with the next movement.

Bumstead next performed front raises on the cable machine with a rope attachment. This movement activates the anterior deltoid. Bumstead performed a few sets of this exercise and proceeded to do the next one.

Bumstead then proceeded to work the posterior deltoids with this isolation movement. Performing this exercise on the cable pulley set at shoulder height allows a more natural movement pattern.

The Canadian performed four sets of this exercise and moved on to the last exercise of the day.

This served as the finisher of Bumstead’s shoulder workout. The bent-over lateral raise works the posterior deltoids. Additionally, it activates other muscles like rhomboids, trapezius, triceps, hamstrings, and lower back.

The reigning Classic Physique Olympia champ performed a few sets of this exercise and wrapped up the shoulder training session.

Bumstead is working hard to retain the Classic Physique title at the 2022 Olympia. However, the division has a deep talent pool, and CBum will have to fight it off to make it four in a row. Besides the former champion and fierce rival Breon Ansley, the 2022 Arnold Classic winner Terrence Ruffin and young prospects like Ramon Rocha Queiroz and Urs Kalecinski seem to be in the best shape of their career. Nonetheless, the 2022 Olympia will show if Bumstead can retain his throne.