The four-time Mr. Olympia got a chest and shoulders pump while discussing some of the biggest moments throughout his career. 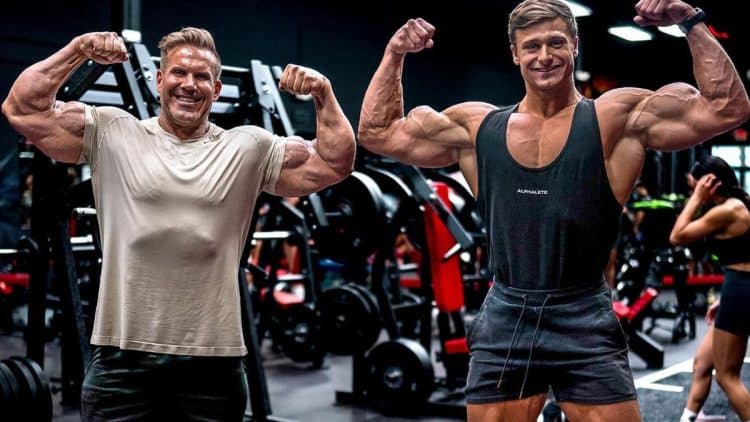 Jay Cutler maintained himself as one of the best bodybuilders in the world for 12 years. In a recent video, Cutler and Men’s Physique amateur Ryan Dengler joined hands for a high-volume chest and shoulders workout.

“This [workout] was probably my meat and potatoes exercise back when I was doing it,” Cutler shared.

During his tenure, Cutler won the prestigious Mr. Olympia title four times (2006, 2007, 2009, 2010). In 2006, he shocked the world when his idol became his rival after he dethroned “The King” Ronnie Coleman. While he’s stepped away from the sport in retirement, Cutler remembers the “dark place” he had to go to in order to keep up with Coleman, who managed to win eight Olympia titles himself.

Despite hanging up his posing trunks, Cutler’s presence is still felt in the IFBB Pro League today. In fact, if you were to ask Olympia President Dan Solomon who his favorite bodybuilder is — he wouldn’t stutter in naming Cutler as the most prolific athlete the sport has seen.

Lauded for his work ethic, Cutler continues to prove why he stood amongst the best by training with a number of bodybuilders and popular athletes. Recently, the four-time Mr. Olympia winner gave influencer Jesse James West posing instructions. In addition, Cutler teamed up with 2013 Women’s Physique Olympia Dana Linn-Bailey. This time, however, he’s helping out amateur bodybuilder Ryan Dengler as he continues improving his physique.

During the recent video, Cutler and Dengler worked on the chest and shoulders with high volume.

“Yeah, so normally, I do two warm up sets for this exercise then I pyramid up as I go, just to get the blood going a little bit. I usually maxed out with the biggest dumbbells they had but we’re not going to do that today,” says Cutler.

Before starting the first exercise, Cutler was asked how heavy he likes his dumbbells since retiring.

“Maybe this, or 100 maybe. I don’t like to count reps really,” Cutler shared. “So for me, I would do 20 sets for chest, 20 for shoulders, 20 for bis and tris — same thing. Like I never trained absolutely the same for every Olympia win you know. But I seemed to always keep the rep range around 12. Rest period 45-60 [seconds] high volume… a lot of volume.”

Cutler added that he didn’t train to failure throughout his career.

“I never really trained to failure. So, I didn’t train with a training partner so I didn’t have anyone that could really spot me. I didn’t grab a guy in the gym but everything I touched in the gym I could pretty much do for 12 reps to be honest. I did 160-pound dumbbell presses for shoulders for an easy 12. I just go so strong after a certain time. Even when I was your age, I was a beast. I was already 270 [pounds] by the time I was 21.”

After hitting a few sets, Ryan asked Cutler about his max on the bench press. Cutler shared that he stopped lifting for max weight when he realized he needed to preserve his body for the years to come.

“550 for two. You know what, I did it when I wasn’t making money. When I started making money and realizing that my body was like the tool to make a living, I stopped going to max weights.”

“There came a point where it’s like, I was still bigger than everyone except Ronnie [Coleman. So it was like, do I really need to be bigger you know. Detail. Detail wins. Especially in like your division [Men’s Physique] you have to have detail.”

In between exercises, Cutler reflected on his accomplishments.

After they both fired off a set of cable crossovers, Dengler asked the four-time Mr. Olympia about the diets/training splits he used during his career.

“I tricked my body so I would actually go up and down so much in calories that I’d have re-feeds with clean food. My days off would be my low days — two days a week. Then, I would have a medium day and a high day. A high day was always legs or back. Then like chest or shoulders or whatever were medium days.

So the calories still went in a big range, so I’d get enough glycogen so I wouldn’t deplete myself and it tricked my body so that I’d lose the body fat but maintaining the fullness,” says Cutler. “[I was eating] 6,000 calories a day.”

This isn’t the first time that Jay Cutler has talked about the extreme diet he stuck to during his prime. He revealed in April that he ate 140 egg whites daily to maintain adequate muscle mass. Earlier this month, the bodybuilding legend shared his “breakfast of champions,” which consisted of egg whites, grits, muffins, a bagel, and bananas.

Even though Cutler doesn’t compete anymore, he’s become a figurehead in the bodybuilding community due to his experience and knowledge. His latest chest and shoulders workout with Ryan Dengler showed that he still practices many of the techniques that saw him reach the highest level in the sport.