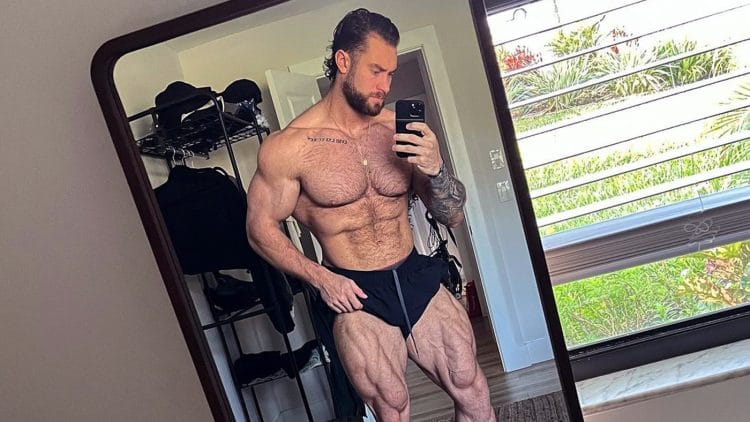 Classic Physique Olympia champion Chris Bumstead has steadily worked on his build despite contracting COVID-19 around the holidays. Recently, the Canadian bodybuilder took to social media and gave fans a glimpse of his toned physique.

Earning his IFBB pro card in 2016, Chris Bumstead has had a lasting impact on the sport. At just 26-years-old, Chris Bumstead is one of the younger bodybuilders but his stage presence is that of a veteran.

As an elite bodybuilder, Chris Bumstead is known for his relentless pursuit of improvement. The bodybuilder has made steady gains lately and has done so in a calculated manner. Bumstead successfully defended his Classic Physique Olympia title in 2021. Following the victory, Bumstead would contract a severe case of COVID-19 and needed ample time to recover from the illness.

While Bumstead continued to work out, he dialed it down significantly. As a result of the nefarious illness, Bumstead lost a considerable amount of weight. Recently, the 2021 Classic Physique champ posted an update and his build looks to be gradually improving.

I forgot my scale in Orlando after the O and hadn’t weighed myself until last week. Current weight is 237lbs.

I’ve kept my diet on point so I didn’t end up looking like 💩 while I was barely training and to properly reverse diet so my body was primed and ready for a good offseason.

Now starting my offseason my digestion/appetite is great (even though I can’t taste), bf% is at a great spot to start adding mass, and my body feels rested and ready to grow.

Plenty of aspects I can be better at this year and I’m excited to apply them🙏🏼
P.S. transformation contest sign ups are still live, see the link in my bio.” Chris Bumstead shared.

With a little under a year until the next Olympia event, it’s great to see Chris Bumstead getting back in action. While Bumstead has clearly lost some mass, it looks like the bodybuilding champ is preparing to step back into some heavier training.

The 3X Olympia champ will seek a fourth title in 2022. As one of the more transparent bodybuilders, Chris Bumstead has always given fans a birds’ eye view of his career and his bodybuilding journey, which has seen incredible heights.

The Canadian bodybuilder concedes that his current weight is the same as his stage weight at the 2021 Olympia. Bumstead admits he has focused on his diet as to not lose the aesthetic features that have seen him win a handful of major titles. Despite grappling with a rough case of COVID-19, Chris Bumstead’s physique update looks promising to start off 2022.