In the days leading up to their fight, tensions are rising between Iranian Hulk and Kazakh Titan. 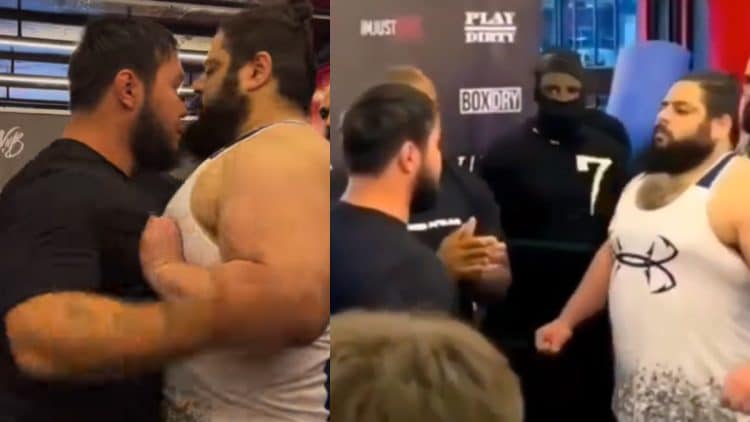 Sajad “Iranian Hulk” Gharibi will finally be able to display his fighting skills in the ring after a long wait. Martyn Ford was supposed to be his opponent, but the fight between them got canceled after a series of events. However, Sajad Gharibi was very quick to find his replacement, so he is now set to fight Djumanov Almat Bakhytovich, also known as the “Kazakh Titan”. The fight will take place this Sunday, July 31, at the P7 Arena in Dubai.

In anticipation of their fight, the pair got into a face-off, which immediately became heated. Similar to Iranian Hulk’s face-off with Martyn Ford, both Sajad and Djumanov got physical. Kazakh Titan was the first man to take action, as he pushed Iranian Hulk’s head away. They then got separated by multiple men and were kept away from each other until the situation seemingly calmed down. However, as soon as the Iranian Hulk got close enough, he partially landed a slap across Kazakh Titan’s face.

Check out the face-off from multiple angles here:

This is not the first time that the Iranian Hulk was involved in a face-to-face incident, as his face-off against Martyn Ford looked very similar to this one. However, that incident eventually came up as the main reason for the cancellation of their match. The Iranian Hulk suffered severe backlash at home after the incident with Martyn Ford, and even revealed that his family disowned him. That led to some self-harm statements, so Martyn Ford canceled the match because of some mental health precautions.

It is hoped that Iranian Hulk’s fight against Kazakh Titan will not reach into his personal life, but serve simply as a great way for them to warm up for their upcoming showdown. Both men are highly optimistic of a KO, despite the fight only lasting eight minutes (4 rounds of 2 minutes). We will see how much they can accomplish in that time frame.

“”This fight is for me to set the record straight. I will be a great champion for Iran and I’ll represent my people with respect and all my strength. After I win this fight, I want to challenge myself against Martyn Ford, this fight will happen, if Martyn is too scared to fight me then the world will know. I’m stepping into the ring now ready to fight.”

With a few days still left until the Iranian Hulk vs Kazakh Titan fight, the situation is already starting to get interesting. It’s going to be an epic fight between two men fighting for their pride and country. There is only one winner, and whoever it is, his life may be changed for the better as a result of this fight.