Despite injuring his pectoral muscle, WWE's Cody Rhodes still put on a jaw-dropping performance in the recent 'Hell in a Cell' pay-per-view. 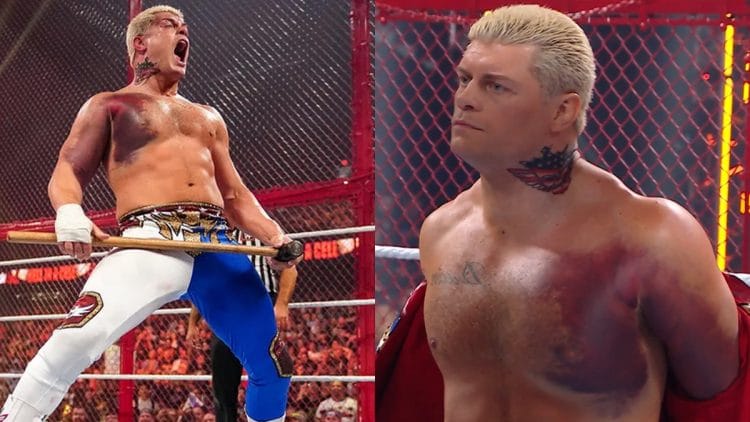 WWE’s Cody Rhodes (real name Cody Garrett Runnels) has quickly rose to prominence in the world of professional wrestling, mostly due to his charismatic personality and sharp mic skills. Hours before performing at ‘Hell in a Cell’, Rhodes suffered a pectoral injury, but it didn’t stop him from putting on an amazing main event against Seth Rollins.

Performing under the stage name “Stardust”, Rhodes led a successful tenure in the World Wrestling Entertainment (WWE) organization from 2006 to 2016. In addition to finding success in the WWE, Rhodes is revered for his time spent performing under All Elite Wrestling (AEW) banner, where he managed to become a three-time AEW TNT Champion. His impact on the promotion was felt for years to come, as Rhodes would also serve as the Executive Vice President of the company.

The infamous ‘Hell in a Cell’ routine is appreciated by fans worldwide due to its violent nature. The pay-per-view event has been around well over a decade and has featured some of Pro wrestling’s most prolific stars. From seeing CM Punk take on John Cena to Randy Orton versus Drew Mclntyre, the marquee show made its name with shock value and downright painful wrestling sequences. Bottom line: ‘Hell in a Cell’ matches have always had an extra flair of entertainment and excitement, with the recent showdown between Rhodes and Rollins being no different.

While it’s unclear exactly how severe the damage is, Cody Rhodes was clearly feeling pain during his pay-per-view ‘Hell in a Cell’ main event against Seth Rollins. He can be seen with a noticeably bruised chest and bicep, near the injury site during the performance.

Moments after @WWERollins unspeakable attack on @CodyRhodes, The American Nightmare's fights to get back to his feet and walk out on his own power.#WWERaw pic.twitter.com/dDswGgWaHO

Despite the obviously bruised and swollen chest, Rhodes put forth a legendary performance, which will likely go down in the history books as one of the bravest and most violent. After Rollins landed a superkick to Rhodes’ temple, he power-bombed the former AEW champion into a table. During the footage, Rhodes looked extremely uncomfortable but offered fans an authentic reaction, nonetheless.

This type of injury or accident is all too common in the world of professional wrestling. These injuries can sideline athletes for a long time, which is precisely what happened to John Cena, who was forced to take time off after ripping his pec in 2007.

Popular wrestling icon ‘Triple H’ also tore his pec, an accident which occurred in 2018. However, unlike Rhodes’ injury that happened in training, ‘Triple H’ sustained the damage in the middle of performing on the Crown Jewel pay-per-view, featuring other top names in the sport like Shawn Michaels, Kane, and Undertaker.

Check out the full WWE clip below:

While a pectoral injury has sidelined some of the sport’s most successful athletes, it didn’t stop Rhodes from putting on a spectacular show with Rollins. These pectoral injuries are also common in powerlifting and bodybuilding. In fact, bodybuilder Ryan Crowley ripped his pectoral muscle off the bone during a heavy incline bench press. Fortunately, one of the strongest powerlifters in the game, Larry Wheels came to Crowley’s rescue and saved him from taking catastrophic damage.

The timing of Rhodes’ injury couldn’t be much worse since “The American Nightmare” recently came back to the promotion after Wrestlemania to face off against Rollins. For the time being, it appears any obligations Rhodes had for his new wrestling home will be put one ice until he makes a full recovery.

The average person weighing 180 pounds burns 515 calories per hour wrestling, the total calories burned depends on the your...