Discover the training and diet that action hero and WWE legend John Cena follows to maintain his muscular, lean physique. 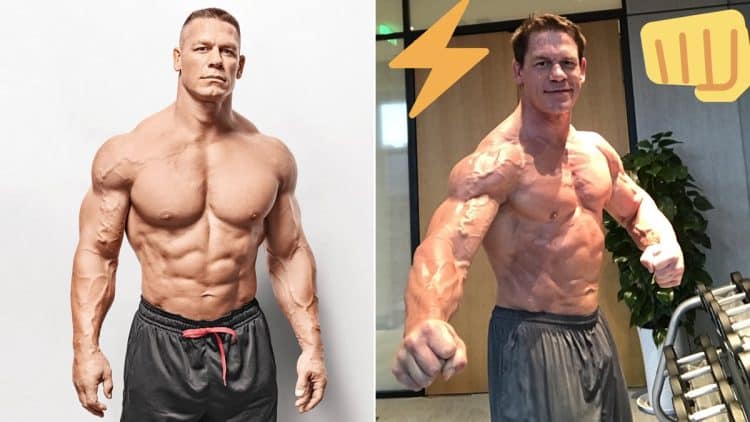 When it comes to rugged muscle mass, few Hollywood action stars can stand alongside John Cena. The former WWE superstar has firmly established himself on the silver screen, thrilling audiences with his acting skills and a truly impressive physique.

In this article, we’ll drill down on Cena’s workout and diet program. We’ll find out what he does on a daily basis to maintain his size, while staying lean and mean for his movie roles.

John Felix Anthony Cena was born on April 23, 1977, in West Newberry, Massachusetts. John and his four siblings were raised Catholics. He attended Central Catholic High School in Lawrence, Massachusetts, then transferred to the Cushing Academy, a private prep school, before attending Springfield, Massachusetts. In college, he played football on an NCAA Division III team as a center. Cena graduated in 1999 with a degree in exercise physiology and bodily movement.

After completing his studies, Cena found work as a limousine driver. At the same time, he pursued careers in bodybuilding and wrestling. He began his formal wrestling training in 1999 when he attended Ultimate Pro Wrestling’s Ultimate University in California. He soon took on the persona of a semi-robotic character called The Prototype. He wrestled with the UPW until March 2001.

Cena made his unofficial debut with the WWF in October 2000 under the Prototype billing and signed a developmental contract with the company in early 2001. He got a call up to the main roster in 2004, along with other future luminaries such as Brock Lesnar, Randy Orton, and Batista.

Cena’s film career began with 2006’s The Marine. This movie was a production of the WWE Studios, a division of the WWE. He starred in two more WWE Studios moves, along with the 2010 children’s film Fred: The Movie.

In July 2009, Cena married Elizabeth Huberdeau, but they divorced three years later. Shortly after, he began dating fellow wrestler Nikki Bella. Cena proposed at Wrestlemania 33 in 2017, but the relationship ended the following year.

John Cena has always been an extremely hard worker in the gym. He leaves nothing in the tank, whether he’s training to add mass, get ripped, or is on a maintenance phase. However, to fuel up that level of activity, he requires a ton of energy.

To supply his body with the energy he needs, Cena eats seven meals a day, spread a couple of hours apart. He averages 3,600 calories per day, with the following macro breakdown:

Here is a breakdown of a typical day’s worth of eating for John Cena:

The WWE star abides by the following dieting principles:

John Cena began working out with weights at the age of 12. That’s when he caught the bodybuilding bug. In the decades since then, he’s used all sorts of routines. Over the last few years, his training focuses on maintaining his sizable gains while staying lean for his movie roles.

As with all actors, Cena trains for specific roles. So, if a script demands spending a lot of time wearing a tank top, he’ll prioritize working his arms. The following program is an example of the maintenance type training he is currently doing.

To ensure that he has all his nutritional bases covered, John relies on three key supplements:

John typically has three protein shakes per day. These are usually in meals number two, five, and seven. In the first two meals, he uses a whey protein isolate, which has most of the carbs and milk fats removed. Whey protein is a fast-acting protein. It facilitates the quick release and absorption of amino acids into the muscles, promoting protein synthesis.

The last meal of the day will be a casein protein drink. Casein is slower acting and provides a slow release of amino acids throughout the night.

Cena uses protein bars as a substitute for whey protein. However, he only buys bars free of artificial flavors and preservatives.

John adds a BCAA powder to his pre-workout shake. The powder provides six grams of branch chain amino acids in the 2:1:1 ratio so that there is twice as much leucine as valine and isoleucine.

Check out the best BCAA Supplements of 2022

John takes a daily multivitamin that covers at least twice the daily value (DV) of the following key vitamins:

Hardcore athletes require more vitamins than sedentary people, prompting Cena to opt for a multivitamin that delivers a higher dose of the most important vitamins.

These are the 8 Best Vegan Multivitamins of 2022

John Cena is one of the most successful athletes to emerge from the WWE universe. After attaining legendary status in the ring, he has carved out a space for himself as an action hero in Hollywood. In this article, we’ve covered how he trains and eats to maintain his A-level physique.

Ready to give the Cena workout a try? Let us know how it goes in the comments.

Medicine Ball Exercises for Fitness, Fat-Burning, And A Stronger Core

Dylan McKenna is a rising fitness star, model, and social media personality. On the strength of his muscular, ripped physique...