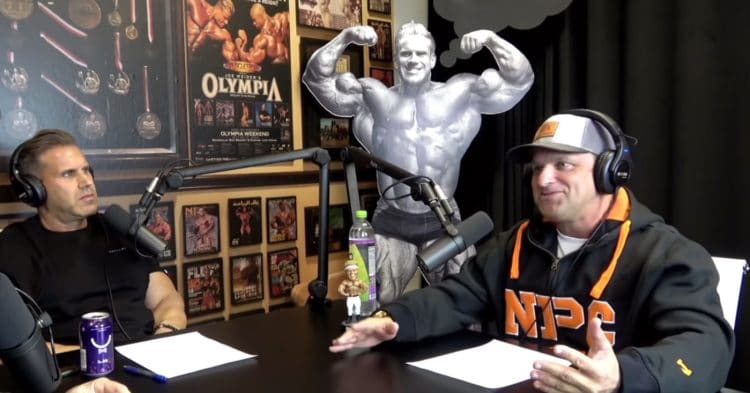 The sport of bodybuilding has witnessed a number of unfortunate and untimely deaths in the industry. Following the death of 2018 Olympia winner Shawn Rhoden, Shawn Ray believes some of his crass remarks were taken out of context, and Jay Cutler and Dan Solomon discuss the backlash Shawn Ray is facing as a result.

When Rhoden passed away from an alleged heart attack at 46, it shook the foundation of the bodybuilding community. A loss of life so young is a devastating thought. However, when old school bodybuilder Shawn Ray heard the news, he wasn’t as somber-toned as some of his cohorts.

On episode 16 of Cutler Cast, Jay Cutler and Dan Solomon speak to the impact of Shawn Ray’s comments and how the bodybuilding community has reacted to his response regarding Rhoden’s death.

“There’s been a lot of news lately, about our good friend Shawn Ray. Cutler said.” (Dan Solomon replies) “Yeah, you know it’s funny you mention the Shawn Ray thing–because it’s amazing how my phone blew up on that one. Solomon said. It seems like on some level, anything that happens it makes its way across my desk on some level and we take it all pretty seriously, we do. The Shawn thing was interesting, and it got me thinking because for starters I want to be clear about something because I know there’s folks who watch these shows and listen to these shows and they love to get those sound bites.

So I’m going to be really clear. I don’t agree with most of the things Shawn said. I want to be crystal clear about that. Shawn says things all the time that I don’t agree with. Dan Solomon said. And it got me thinking, I mean Shawn’s comments went out there and then people were reaching out to Jake Wood, who of course owns the Olympia and Muscle and Fitness and reaching out to all sorts of people, talking about the idea of firing Shawn and canceling Shawn and that was a big conversation and it still is and it got me thinking you guys will appreciate that you especially jay do.

I really work hard to provide a culture where the folks, who work for me and the folks who work throughout this industry are given the freedom to say what they have to say, even if it makes people uncomfortable at times and even if i disagree with many of the things that they say. I think we should all stop and take astep back and be very careful about asking folks to be canceled or fired, because a lot of the people who are asking for certain people to be canceled or fired are the people who they themselves are some of the most intensely questionable opinion givers out there. Solomon said“

Unlike Shawn Roden, Shawn Ray got out of the bodybuilding game at a younger age. Competing 13-years as a pro, Ray retired at the age of 36. While he is no longer actively competing in bodybuilding, he remains a notable figure and a great ambassador for the sport. Some bodybuilding figures like Guy Cisternino heard of Ray’s comments and immediately called him out for the “disgusting remarks” geared toward the late Shawn Rhoden.

On Thursday, Chief Olympia officer Dan Solomon announced 2022 Olympia would be returning to Las Vegas after it spent two years in the Sunshine State of Florida. Solomon gave fans an early Christmas present after revealing 2022 Olympia weekend would take place between Dec. 16th-18th.

Speaking with Jay Cutler, Solomon shares some details about the monetary side of Olympia. It is for the most part an unrivaled force in the sport of bodybuilding.

“So it’s something that I know Jim is proud of but also wants to see continue to grow. Solomon told Cutler. I know Jake Wood, our owner, I can tell you that when he looks at the prize money every year, he’s constantly looking at ways to improve the prize money. Yeah, it’s going to keep going up. It’s gone up every single year. This year at the Olympia, we gave away $3.6 million dollars.”

Despite the bodybuilding community bickering over Shawn Ray’s comments, rising excitement is mounting as training commences for the 2022 season of Mr. Olympia. With 12 qualifiers already revealed, the field of competitors continues to narrow. Dan Solomon admitted that Olympia’s last season awarded over $3.6 million dollars in prize money, so motivation certainly won’t be at a low when the next season of Mr. Olympia fires up.