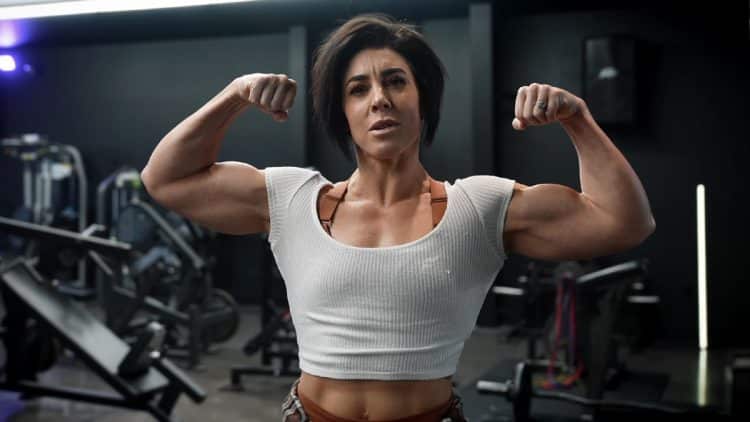 Dana Linn Bailey has advice for lifters that want bulging, massive biceps. Bailey is a retired professional bodybuilder and a pioneer of the Women’s Physique division. She rose to prominence with a win at the 2011 Jr. USA, the first Women’s Physique show in the IFBB history. She also won the inaugural Women’s Physique Olympia title in 2013.

Following her retirement from competitive bodybuilding, ‘DLB’ has become one of the leading female fitness influencers. The former champion started the Warhouse gym with her husband, Rob Bailey. However, the couple had to shut shop in 2020 due to the global pandemic. Bailey routinely shares her bodybuilding knowledge through her YouTube channel. At the time of writing, she has over five hundred thousand subscribers.

In a recent video on YouTube, Bailey shared pro tips for building massive biceps. So without further delay, let’s explore the tips.

Although the biceps are a critical muscle group, they are relatively small. As a result, they respond well to moderate weights and high volume. DLB opined that many people lift too heavy while training the biceps and advised against it.

To spot if you are lifting too heavy, Bailey advised trying an EZ bar curl.

Besides reducing the weight, the former Women’s Physique Olympia champion had another pro tip to address this problem.

“Keep your elbows pinned to your side or the top part of your arm. Pin that towards your lat, and it stays still. So there should be no movement of the shoulder. So you’re not starting the movement and then curling up. The other part to keep your forearm out of it is don’t curl your wrists in.”

DLB demonstrated the incorrect way of doing EZ bar curls to understand the mistakes mentioned above and followed it up with a few reps with the correct technique — elbows and forearms tucked to the side with no wrists curling. This way, you can do the curls with only the biceps without involving shoulders and forearms strength or momentum.

Bailey’s second pro tip for building biceps is a fairly obvious one. However, most of us fail at it. A full range of motion involves getting the muscle fully contracted and fully stretched during a rep.

According to DLB, incline dumbbell curls put the biceps in a fully stretched position at the beginning of the rep and help contract the muscle completely at the top.

“Another really good exercise that really puts that bicep in the fully stretched out position is the behind-the-body cable curls.”

The 39-year-old explained the correct technique to do the cable machine exercise. DLB suggested holding the D-handle attached to the cable machine and stepping ahead. This position puts the hand slightly behind the body and stretches the biceps. Doing the curls from this position enables a full range of motion. You can superset this exercise with dumbbell hammer curls.

Add partial reps to the exercises

This pro tip contradicts the previous one but is necessary and important. Why? Because it helps you get more volume and keeps the muscles under tension for longer.

“Maybe you can reach failure or close to failure, but you can then go further, keep going, and hit failure again by only using partial reps.”
“So full range and partial range. Use all the ranges.”

Focus on building the mind-muscle connection

Bailey stated that as a bodybuilder, she focuses on building the mind-muscle connection and feeling the muscle she is working.

According to her, a single-arm preacher curl is an excellent exercise to build the mind-muscle connection. Slowly curling the biceps and then holding the contracted position for a few seconds to focus on the squeeze is one of the best ways to build that connection.

“Mind-muscle connection can really help you improve and actually trigger your muscles to grow faster.”

Add variety to the routine

Repeatedly doing the same motion will not necessarily get you the desired results. Working the muscle from different angles and levels and using various techniques will emphasize different parts of the muscle and help you grow faster.

Bailey advised incorporating exercises like high lat pulldown curls, high cable curls, etc., to change how you use the muscle.

“Variation is the key to pretty much every body part and growth.”

DLB continues to be a motivation for gym-goers. Her pro tips for building biceps are not a shortcut. They are intelligent adjustments that will help you reach your goals faster. So get ready and start implementing them int your routine.

You can watch the full video below, courtesy of Dana Linn Bailey’s YouTube channel: