We rewind the clock to Women Physique Olympia's debut and look at the show's history. 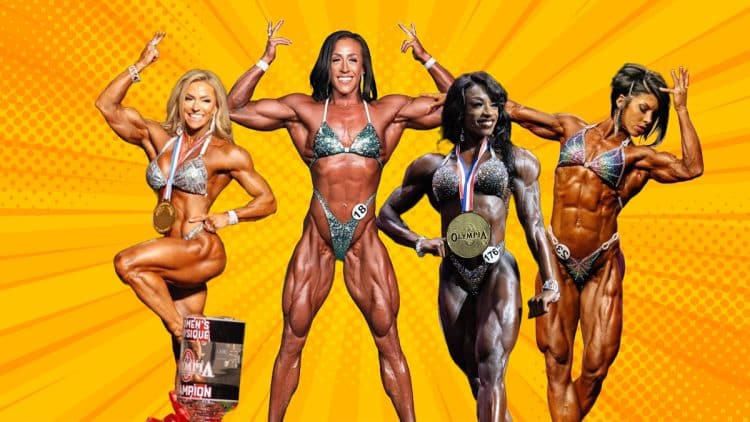 The Mr. Olympia competition has come a long way since its inception in 1965. Although the spotlight was initially on the mass monsters of the Men’s Open division, Joe Weider’s Olympia Fitness and Performance Weekend has evolved over the years. In 2013, the International Federation of Bodybuilding and Fitness (IFBB) added two new divisions to the most prestigious fitness showcase. These divisions were the Men’s Physique and Women’s Physique classes.

The addition of the new divisions created a lot of excitement in the community. It made way for more female athletes to participate in Olympia. The IFBB recognized the potential of the Women’s Physique category and incorporated it into the biggest show of bodybuilding.

This article goes over the history of the Women’s Physique Olympia contest, the notable moments, rivalries, and the five champions who have held the throne over the past decade.

Given below is the list of all Women’s Physique Olympia champs since 2013:

There was a lot of anticipation going into the debut season of the Women’s Physique Olympia contest. Fans were excited to check out the new talent and how it would separate itself from the other categories.

It would be safe to say that Linn Bailey set the gold standard for the Women’s Physique division. Although she was well-known before the show, Bailey’s popularity skyrocketed after she became the first Women’s Physique Olympia champion in 2013.

Bailey would be the only victor to settle with one trophy as each of the three following champions won at least two shows.

However, Juliana Malacarne turned out to be the dark horse at the show. Determined to improve her seventh-place finish from the previous year, she made the most notable progress of any athlete. She stood out as the clear winner and won her first Olympia trophy. Bailey came in second, while Coppett dropped down to the third spot.

Bailey would not return to the Super Bowl of bodybuilding again. She decided to step away from professional bodybuilding competitions in favor of powerlifting after placing second at the 2015 Arnold Classic Women’s Physique behind Malacarne. That same year at the Olympia, Malacarne became the first Women’s Physique athlete to defend her throne successfully.

Following her Olympia win in 2017, Malacarne announced her retirement from the competition. With four trophies to her name, Malacarne leads the list of the most wins in Women’s Physique Olympia history.

Malacarne did not return to the 2018 Olympia to defend her title, leaving room for a new victor to emerge.

Grace was a frontrunner for the title but faced stiff competition from rising sensations Shanique Grant and Natalia Abraham Coelho, a former Olympia Figure competitor who switched to the Women’s Physique division.

Grant came out on top after a hard-fought battle with fellow debutant Coelho to win her maiden Olympia trophy.

The rivalry between Grant and Coelho got more intense after the close result in 2018. Coelho was Grant’s top challenger at the 2019 Olympia. While many expected Coelho and Grant to battle it out for the top prize, Sarah Villegas turned out to be the wild card at the 2019 Women’s Physique Olympia.

Grant faced serious heat from Villegas on the 2019 Olympia stage. However, she secured her second win and became the second champion to win multiple Olympia trophies. Coelho could not retain her runner-up place and dropped down to the third spot behind Villegas.

Having narrowly missed out on the win, Villegas got to work in the off-season to make necessary improvements. She was determined not to leave any room for errors at the 2020 Olympia showdown.

It was the year when COVID-19 changed the world and pandemic-related restrictions made it tougher for everyone, including the Olympia organizers and athletes. The contest was pushed to December from September and was moved to Orlando, FL, from its longtime home in Las Vegas.

With Grant out of the way, Coelho served as the main opponent for Villegas at the 2021 Women’s Physique Olympia. Coelho had established herself as one of the most consistent athletes, switching between the second and third spot for the last three years. While Coelho brought an improved package for the show, Villegas edged her out again with an even better physique to win her second Women’s Physique contest.

Besides the two seasoned pros, Brooke Walker put in an impressive performance in her debut to get third place. Coelho fell short of Villegas and finished on the podium for the fourth year in a row.

After four years in the top three, Coelho finally tore through her competition at the 2022 Mr. O to win her maiden Women’s Physique Olympia title.

Many experts were backing Coelho to upset Villegas at the 2022 O, and the Brazilian-American bodybuilder didn’t let her fans down by showing up with the perfect package. She bested the reigning champ with her aesthetics, conditioning, and shape.