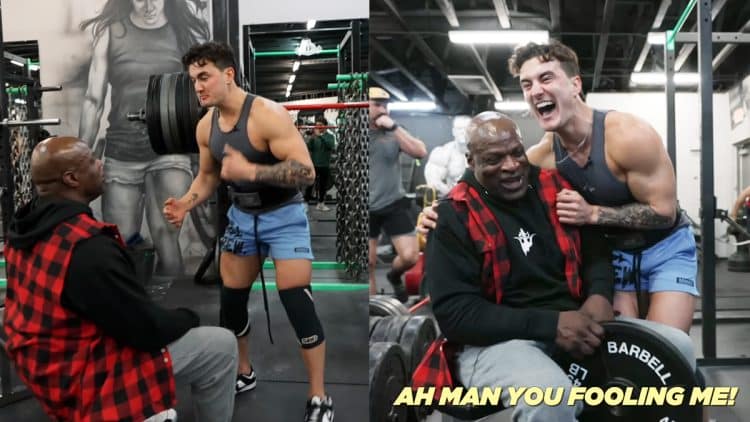 Bodybuilding legend Ronnie Coleman, an eight-time Mr. Olympia champion, is widely regarded as one of the strongest bodybuilders of all time. In a recent YouTube video, Jesse James West pranked Coleman by performing some huge lifts with fake weights.

Ronnie Coleman dominated the bodybuilding stages from 1998 to 2005 and holds the joint record for the most wins in Mr. Olympia’s history with Lee Haney at eight. Besides boasting insane muscularity, Coleman was renowned for his extreme workouts and crazy feats of strength, including gigantic 800-lb squats and 2,300-pound leg presses.

Social media sensation Jesse James West is known for testing out new trends and challenges while creating entertaining fitness content. West has amassed a following of over 2.25 million subscribers on YouTube and more than 688,000 on Instagram. He regularly collaborates with other celebrities for workout challenges.

Coleman joined forces with West for a grueling training session last July. He guided West through his old workout routine that he utilized during his days of competition.

In August, West tried living like the Liver King, real name Bryan Johnson, by eating, training, and sleeping like the 45-year-old for 50 hours straight. Johnson mentored West and pushed him through the nine tenets of an ancestral lifestyle.

Jesse partnered with bodybuilding icon Jay Cutler for a taxing chest workout as well. The four-time Mr. Olympia motivated Jesse to push his limits and even offered some tips for posing on stage.

In a recent YouTube video, Jesse James West tricked Ronnie Coleman into thinking that he pulled off some heavy lifts with the use of fake weights.

Jesse started with the Bench Press using weights as follows:

Over a week ago, Jesse James West brought Ronnie Coleman and Jay Cutler together for a workout. The two Mr. Olympia champions reminisced over their time competing against each other on the stage.

RELATED: Larry Wheels and Influencer Jesse James West Challenge Each Other to Lift a Total of 100,000 Lbs in 60 Minutes