Ahead of his return to the platform, powerlifting legend Daniel Bell pulls off a massive 1030lb squat 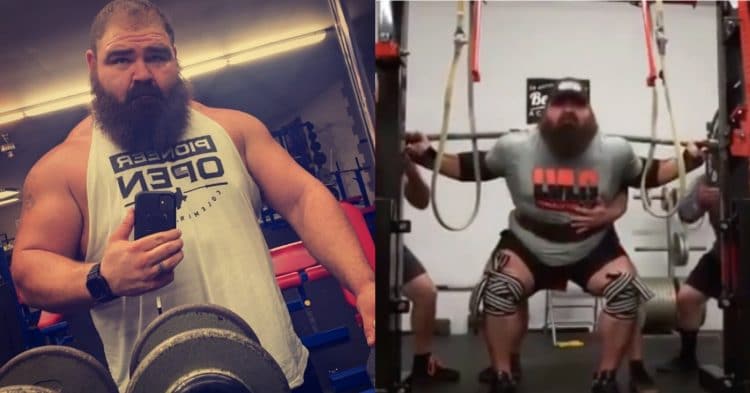 You would not be faced with a lot of adversity when saying that Daniel Bell is perhaps the strongest powerlifter alive. Ahead of his return to competition, the world record holder reminded us of his skills in a big way.

In spite of the craziness that went down in 2020, Bell managed to keep busier than most powerlifters, competing four times. He continued his reign of dominance too, breaking multiple records along the way.

Possibly the biggest highlight of Daniel’s year came at the WRPF Showdown at the Storm event, where he hit a solid 1102lb squat. It was his first multi-ply contest and he made it look easy.

Now Daniel Bell is set to compete for the first time in 2021, with six weeks to go until he makes his return. Ahead of this meet, the training he has been doing has been off the wall.

Daniel gave fans a glimpse at some of this hard core training recently, with a post to his Instagram. Here, the powerlifting champion managed to take 1030lb (467kg) for a ride with a squat double that will make your jaw drop.

“1030lbs these 6 weeks can’t go by fast enough. 💨 This storm crew is firing on all cylinders.”

That was an impressive squat to say the least. Speaking in an interview with Fitness Volt, Bell said that he has always been naturally strong, even in high school, and looking at how effortless this double was, it is not hard to believe that.

This is in the midst of his peak week during this prep cycle, so Daniel was hitting all kinds of impressive numbers. Just a few days before that epic squat, he blew through an impressive 535lb (242kg) bench press for four reps.

The look on the face of the coach of Bell makes it clear that this performance was surprising to him as well. He seemed ready to grab the weight at two reps, then was shocked when Daniel went for a fourth rep.

When he competes in six weeks, it will have been about five months since his last competition. It is clear that Daniel has been using that time to get better all around, and it will be exciting to see that pay off in competition.

It seems like there is nobody who can come close to touching Daniel Bell, in terms of his skills on the platform. 2021 promises to be a big year for him, and it off to a good start already.