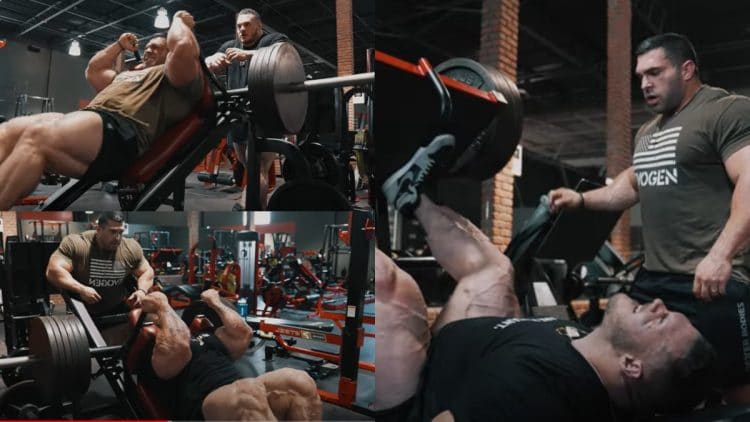 IFBB Pro bodybuilders Nick Walker and Derek Lunsford have become some of the sport’s most exciting athletes to watch due to their muscularity and size. In a recent YouTube video, 212 Olympia champ Derek Lunsford and Men’s Open standout Nick Walker train legs together in Florida.

It didn’t take long for Nick Walker to make his explosive presence known in the Men’s Open division. In 2021, Nick began the season by capturing the New York Pro title. The victory earned him an invitation to the 2021 Mr. Olympia contest. Before taking his monstrous physique to Olympia, he entered the Arnold Classic, and won the prestigious show in his debut. He capped off the season last year by placing fifth at his first-ever Olympia competition.

Lunsford has been a consistent force in the 212 division. He secured first-place at the 2017 Tampa Pro. Ever since, Derek has managed runner-up performances or placed in the top-5 at Olympia from 2017-2020. Persistence paid off for Lunsford in 2021 as he would finally taste gold after winning the 212 Olympia title. With the biggest show of the year still months away, Nick and Derek are determined to leave no doubt with the judges when it’s time to take the stage.

Walker and Lunsford like to start with a pre-exhaust exercise and begin seated leg extensions.

“Yeah of course, like a full leg day. Usually come in and warm up with leg extensions and leg curls to get the blood flowing feeling it out. Then after that either squats or hack squats, something like that. After that we can do a little bit higher intensity, faster FSD7 leg press or something like that.” Derek Lunsford said.

“Even though it’s light, we still want to get a really good warm-up here. That’s why Nick and I are going a lot slower and very controlled and every inch of the rep, we’re squeezing as hard as we can. So we’re making the exercise harder than it really should be right. So we’re trying to get the most out of every single rep without having to up the weight.” Lunsford said.

After working their way up to six plates, Derek reveals that he did a drop set, 6, 4, and 2 with thirty reps and mentioned that he thought Walker did even more during this workout.

“Exercise 1, leg extensions, worked our way up to six plates. Did a drop set, 6,4, and 2. I did thirty reps, I think he did several more. Now, we’re going to move on and put a little blood in the hamstrings before we go on to do any other big movements. So, lying leg curls.” Lunsford said.

The pair move on to lying leg curls next, which Lunsford admits is more of a warm-up for the next exercise, machine hack squats.

“So, for me, on these, my plan was to do about four sets. The first one or two, not so much of a working set and then two pretty decent sets here, nothing crazy. It is still just more of a warm-up for the next exercise we’re about to do.” Lunsford said.

Walker said that judges told him last year one thing he could improve on was his quad’s outer sweep.

“The judges told me that I needed to work on my outer sweep. This year is going to be different.” Nick Walker says.

Next the two bodybuilders move to a series of standing leg/hamstring curls. Nick does 3 sets of 2 reps and his last set for 4 reps. Derek hits 2 sets, the first consisting of 2 reps, and second set was for 3 reps.

Derek and Nick used the lying leg press next. Derek revealed that the workout is supposed to be for five to seven sets with thirty-second rest intervals, 12 reps at a time in a controlled manner with the feet raised up. This was by far one of their most strenuous exercises of the day.

“So, it’s supposed to be five to seven sets, thirty seconds rest and 12 reps at a time but it’s controlled and you have to keep your feet up on the pad because these are blood starving sets so it’s actually going to suck worse when you’re resting than when you’re actually doing the sets. Yeah it’s pretty fun. Derek said.

“For the first two or three sets you’re like this is way too easy. Those last couple sets suck.” Derek says.

Derek and Nick finish with the leg adductor and abductor machines. Nick emphasizes how important it is to switch up the motions and tempo during a workout. While his focus is usually on lifting heavy weights, Nick realizes the value of performing slow, controlled reps.

“I like the way we train. So it’s like leg extensions, we started with a slower tempo, drop set, got a little quicker. And then the hack, the top set. Again, we started slow, we got a little quicker. Then we started over there, and it was pretty much a fast tempo. We got a mix of both worlds in there. I went through a phase, I’m sure we all did, we just trained ball fuc**n heavy and we’re not worried about whether  we feel this this, and this. Then, you slow it down, and you don’t worry about weight so much and then you see the results compound.” Nick Walker shared.

Given the accolades of both men, it’s safe to say they both learned a thing or two from each other.

“I think you and I have a very similar way of thinking when it comes to bodybuilding. I wanted to pick your brain.” Derek tells Nick.

“Yeah, we do. So for example, even when on that hack when I stopped at 12, I listened because you told me to stop. Normally I would of held that, took a couple breaths, and try to get like three or four more. But it was like, 12 was failure for me because if I wouldn’t have gotten a spot, I may have not gotten anymore, so that was enough, you know.”. Nick responded.

Nick highlights that going to failure isn’t always the answer when it comes to prepping a physique for a major bodybuilding show. After hearing Walker out, Derek says when it comes to the off-season, if you really want to grow, and you have the time, going past failure can be a good thing.

“I think in the off-season if you’re trying to really grow and add muscle tissue and you have the time to be able to rest. I think taking some days to complete absolute failure or past failure is good, but I think to do that all the time week after week, I don’t think so man.” Derek said.

After going through the workout routine, 212 Olympia champion Kamal Elgargni crashed the party and fist-bumped Nick and Derek. Judging by their thorough leg day training session, Nick and Derek are preparing accordingly for 2022 Mr. Olympia.