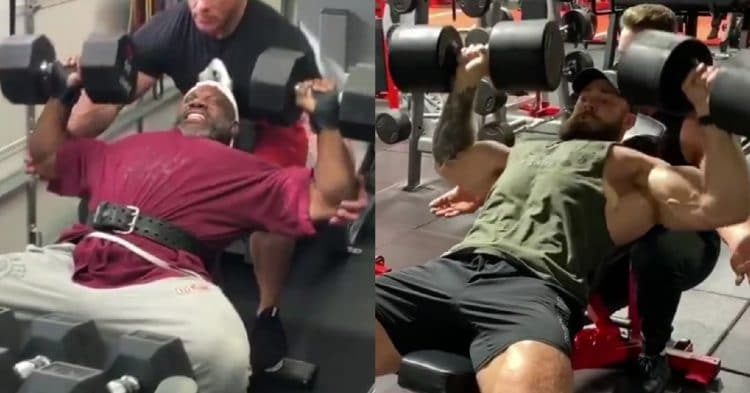 The 2020 Mr. Olympia is approaching fast, and both Dexter Jackson and Chris Bumstead have some things to prove heading into this event. There were some pretty neat parallels between the two, as they both crushed some heavy weight during a chest training session recently.

When winner of the 2008 Mr. Olympia Dexter Jackson steps on stage this December, in Vegas, it will very likely be for the final time. The soon to be 51-year old has had a storied career full of some incredible highs and unreal longevity. However the time has come for him to hang it up, and his plan has been to do so after taking one final stab at winning the Olympia. In order to do this he has been grinding hard in the gym, putting in a ton of hard work during his prep. Recently this was seen in the form of a heavy chest day, posted to Instagram, where “the Blade” cut through ten reps of an incline dumbbell press, using hefty 90lb weights.

This was certainly an impressive set, but Dexter Jackson is not the only bodybuilder using heavy weights to prep for the 2020 Mr. Olympia. 2019 Classic Physique Olympia champ Chris Bumstead has a lot of pressure on his shoulders going into this year’s competition, with a few aggressive rivalries and the desire to prove that his win last year was not a fluke. So he too has been crushing heavy weights in a recent chest session, doing both a 150lb and 130lb dumbbell press set.

Strength is definitely still hanging on at this point in prep and I’m taking advantage of it every chance I get. Training intensity hasn’t dropped, but body fat has. You could say things are going according to plan🤷🏻‍♀️”

Chris Bumstead pressing 150lbs then dropped to 130!! #Repost from @cbum • 150lbs drop to 130lbs💀 Strength is definitely still hanging on at this point in prep and I’m taking advantage of it every chance I get. Training intensity hasn’t dropped, but body fat has. You could say things are going according to plan🤷🏻‍♀️ @iainvalliere

There is no telling who you should be more excited for heading into the 2020 Mr. Olympia. On the one hand it is going to be a bit emotional seeing Dexter Jackson compete for what is likely going to be the last time. On the other hand, there is nothing quite like seeing a bodybuilder during their prime, and it seems that Chris Bumstead is in this position. These are just more reasons to be excited for this massive event.