At age 51, and almost a year into retirement Dexter Jackson shows that he is nowhere near done hitting the gym on a regular basis 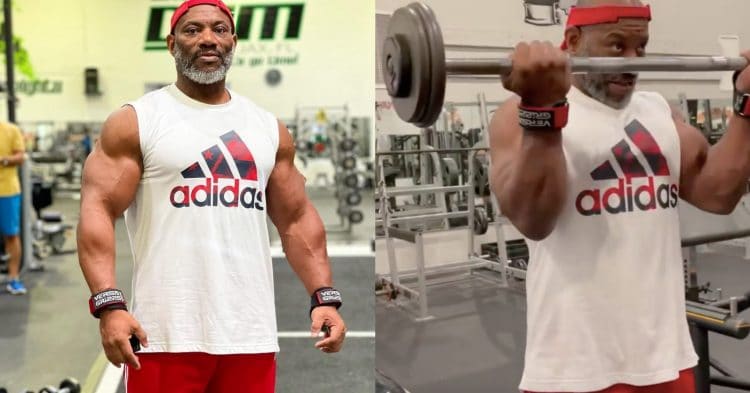 It has been almost a year since Dexter Jackson decided to call an end to his career and retire. That being said, he is still in phenomenal shape, as he showed with a recent physique update.

When it comes to longevity in the sport of bodybuilding, it goes without saying that Dexter Jackson is the gold standard. He was one of the top athletes in the world for the vast majority of his nearly 30-year long career, winning the Olympia in 2008, and eventually retiring after coming 9th at the Olympia in 2020.

However just because he is retired does not mean The Blade is slacking off and lazying around, as he has shown on multiple occasions. The most recent of these came from a post to his Instagram, where he checked in with a physique update, showing off his massive arms and crushing some barbell curls.

“I maybe retired from the stage but never from the gym.. Your boy gone die shredded! Lol” Jackson wrote.

Judging by this photo, Jackson never strays too far from the weight room, as his arms are looking pretty huge. This was definitely backed up with the video of him doing bicep curls, which likely added to the pump that was seen in the picture.

A big portion of what allowed of Dexter’s longevity in the sport, was the fact that he never got too big, instead focusing on training smart and having unreal conditioning. So even now, at 51 years of age, he is able to keep workout out regularly, and still hold on to a solid physique.

If you pay attention to his social media, you can see that Dexter Jackson is in the gym multiple times a week, keeping a pretty consistent training split. Here he is just a few days early, crushing a shoulder training session and looking awesome while doing so.

It is near impossible to overstate how inspiring it is that Dexter Jackson is able to keep in such tremendous shape, even being in his fifties. The fact that he was so competitive at the top of the sport for so long and as late in his career was already impressive, but he is not even competing and is still in great shape.

He has made it clear that he is never going to compete again, and after his farewell speech that makes the most sense. That said, as long as he keeps training like this, he will be in tremendous shape for years to come.