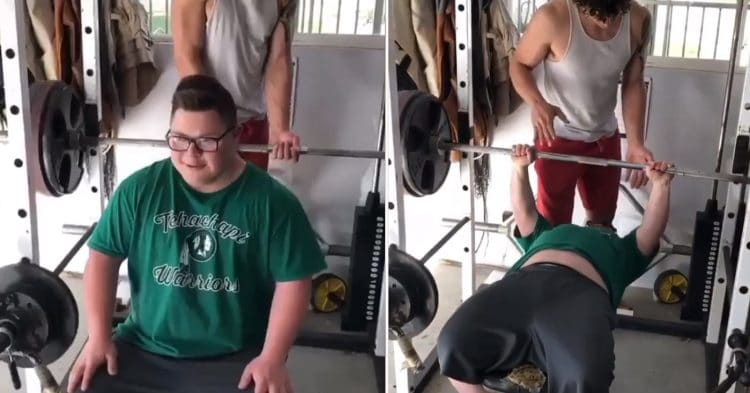 Most grown men who train regularly can’t bench press over 300lbs. So when one high schooler with Down syndrome recently pressed 355 lbs/161kg for a Tik Tok video, well, you could imagine the type of attention this unbelievable feat received on social media.

That high school kid is Garret Alcaraz who’s video was shared with Sportscenter via @fionaj5 on Instagram. And his massive bench press is also apparently the heaviest at his school (Tehachapi High Scool in California).

“Garret has Down syndrome but that doesn’t stop him from benching 355 lbs and being in the lead for the heaviest bench at his school. 🙏🙌 (via @fionaj5)“

Check out the incredible bench press below…

As you can see from the video, Alcaraz took a few seconds to get in his zone, and then he got down to business. Halfway through the press, things got a little heavy as he pushed to fight through but ultimately he was able to complete the repetition and might we add… with no help whatsoever.

Arnold Schwarzenegger is well known as being an advocate for physical fitness, he has also devoted a lot of his time in recent years towards supporting people with special needs to achieve their fitness goals.

“Garret, you inspire me! You set a goal and you achieved it. When this is all over, we have to train together.”

That’s one of the more impressive feats of strength that we’ve seen lately especially coming from a highschooler with a disability. But he has not let the fact that he has Down syndrome stop him from being an absolute beast. And there’s so much more potential there so who knows, with all of this attention, we might be seeing a new PR posted sometime in the future.

Fitness Expert Explains How To Get Really Strong Training At Home