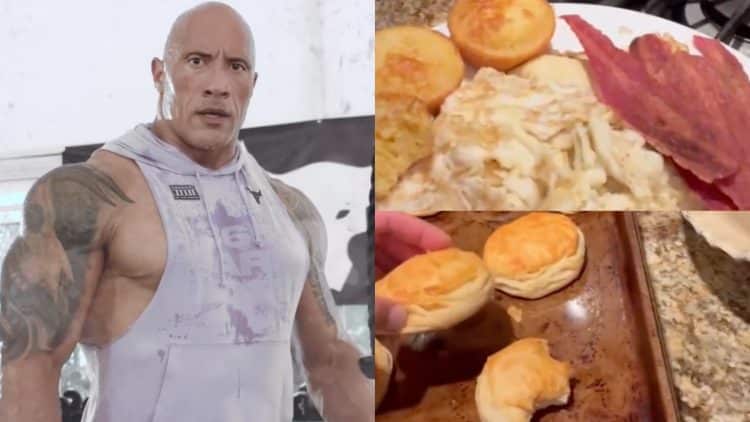 Dwayne ‘The Rock’ Johnson is one of the most successful actors in the world. In a recent video posted on Instagram, Johnson devoured a huge post-workout cheat meal consisting of breakfast foods like pancakes, cornbread, turkey bacon, and eggs.

Johnson first gained notoriety during his pro wrestling days. After his dreams to be a professional football player in the NFL did not come to fruition, he followed in the footsteps of his father to join the WWF (now WWE). He used his popularity to switch over to the silver screen. A few years ago, Johnson topped the list of the highest paid actors of 2020 for a second year straight.

The Rock is one of the most followed celebrities on social media. With over 335 million followers on Instagram alone, he inspires people with his insane work ethic. He preaches his philosophy to be the hardest worker in the room and seems to never get off schedule.

When shooting for a film or traveling, Johnson makes sure to take the time out for training. He shares his videos from his home gym, called Iron Paradise, even late at night. As of late, Johnson provided an extra dose of motivation by sharing the words of C.T. Fletcher from the speech “Obsession,” which he used to power himself through a late-night training session.

In a recent video posted on his Instagram, Dwayne Johnson shared the latest addition to his list of epic cheat meals.

“Cheat meal king here, coming in on this Sunday. This is my post-workout meal and on Sunday, it also happens to be my cheat day. I’m doing it big.

We have a dozen eggs, three whole eggs, and nine egg whites. We have turkey bacon, crispy. These really special cornbread muffins from this local spot here right down in Memphis, Tennessee. My home away from home… plus I have these amazing coconut banana pancakes.

Homemade biscuits, these biscuits are sweet Hawaiian biscuits, that’s what they are called. None of this by the way has any chance of survival.”

As famous as The Rock is for his workouts, he is also very well-known for his epic cheat meals. He recently tried the west coast classic burger chain In-N-Out for the first time.

The Rock likes to train with various professionals from an array of different sports. One of the latest included a daunting workout with NFL’s Aaron Donald. The two pushed their limits inside of the famous LA Rams’ training facility.

He also garnered headlines with a leg workout that he used to decompress after a long week of work. Considering how hard he goes in his training sessions, The Rock likes to reward himself after sticking to a strict diet regimen.

Flat Bench vs. Incline Bench Press – Which one should you do?

Do you want to enjoy the occasional cheat day while intermittent fasting? If so, you're not alone. Many people on...