Dwayne Johnson trained with Donald and reminisced over their upbringing 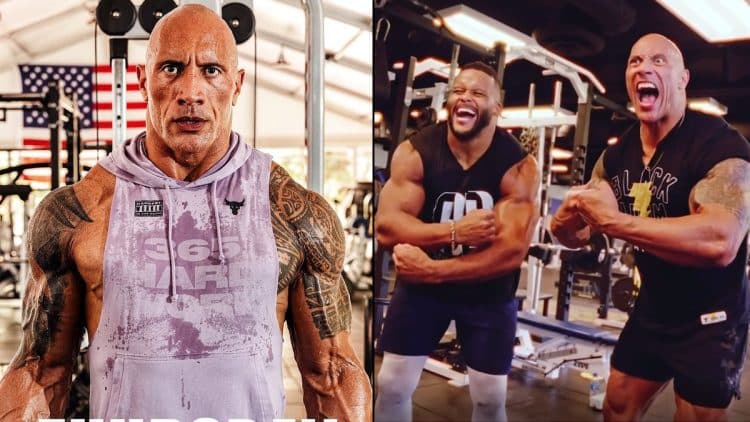 Dwayne ‘The Rock’ Johnson is an inspiration to many who look up to him because of his strong work ethic and discipline. In a recent video posted on Instagram, Johnson teamed up with Aaron Donald for a training session at the LA Rams’ training facility.

As one of the most successful actors in Hollywood, Johnson has a packed schedule each week. After carving out a name for himself in the world of pro wrestling, The Rock took his talents to movie theatres. He was the highest paid actor of 2020 for a second year straight and could have scored another top-entry had it not been for the pandemic.

Johnson promotes the mindset of being the hardest worker in the room and leads by example by regularly sharing his workouts. Although he could be busy acting for a movie during the day, Johnson makes sure he trains, even if it is late at night.

Recently, Dwayne provided his fans with the motivational words of C.T. Fletcher from the speech “Obsession,” to power them through a late-night training session. He also gives regular insight into his personal workout routines, which he generally films at his home gym aptly named Iron Paradise.

Johnson is also well known for his epic cheat meals where he devours a supersized portion of his favorite foods. Whether it’s sweets or In-N-Out Burgers, The Rock enjoys himself when he wonders off his diet.

In a recent video posted on his Instagram, The Rock shared a training session with All-Pro and Super Bowl champion defensive lineman, Aaron Donald at the LA Rams’ training facility.

“Just two hungry boys doing what they love to do 💀💀💪🏾

Loved tearing it up with my brotha @AaronDonald99 at the @rams training facility.

We’re cut from the same intense cloth with our passion for training, family and LEGACY.
But what really moved me about Aaron, is realizing how we were both raised by very similar fathers who taught us at the exact same age – there is no substitute for hard work, through discipline and tough fatherly love.

Johnson and Donald reflected on their childhood and connected over having similar fathers who instilled an intense mindset into them.

“He had me get up in the morning, like even when I was five, six, seven years old,” Johnson said. “But then he made me sit there and watch him. I couldn’t even train until I got to 12.”

The Rock took his physique to the next level recently by adding even more muscle to his already gigantic frame in preparations for the lead role in the upcoming DC film, Black Adam. With so much going on, Johnson needed an intense leg workout that he used to decompress after a busy work week. Judging by his latest workout, The Rock doesn’t appear to be slowing down in the gym.

Hany Rambod Believes Hadi Choopan Is Heavier, Super Conditioned And Ready To Take His Physique To Another Level This Year