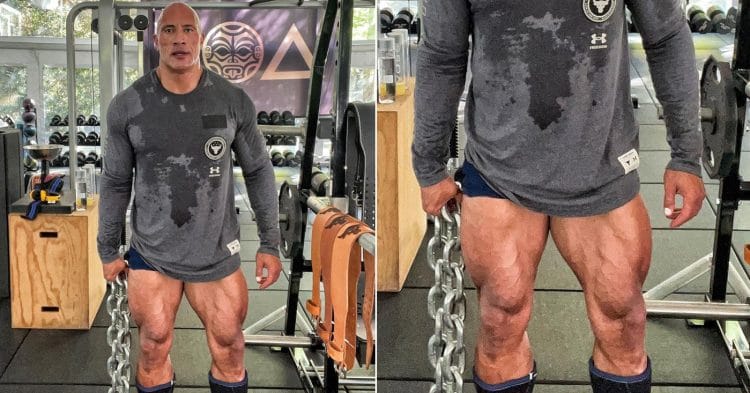 WWE superstar and Hollywood icon Dwayne Johnson has been preparing to don super hero tights for his upcoming role as DC’s Black Adam. To make sure he looks good in spandex, he has been working overtime on his legs.

Given how much of an action star he is, it is somewhat surprising that Johnson has waited so long to make his first appearance as a super powered titan. After all, he was practically built for such a role with his insane physique.

That time has come, as he is set to play the titular character in the upcoming DCEU movie Black Adam. Currently the film is set to release on July 29th, 2022, and The Rock has been hard at work to prepare himself for the role.

Although it is easy to forget sometimes, being in super hero shape is about more than just having a shredded upper body. Dwayne Johnson is making sure to keep that in mind, while he hits the gym for his leg training.

As they say, the proof is in the pudding and this time the dessert came in the form of a post to The Rock’s Instagram page. Here he can be seen just after a training session, showing off his insanely sculpted legs.

“Black Adam ready⚡️⛓
It’s always the work we quietly put in when no one is watching that changes the game.

Grateful for the grind.
(and the face of my Warrior Spirit always watching my back 🙏🏾💪🏾) “

As Johnson explains in the post, production for Black Adam will begin next week, so this is about as complete as his physique will be for the movie. That said, he makes a pretty convincing super hero, and it is clear that he has been doing a ton of work.

Of course, it is more than just the lower half of his physique that looks jacked. A few days earlier he uploaded a bit of an advert for ZOA Energy drinks that gave us a look at the upper part of his body too, proving that he is looking well rounded ahead of the start of filming.

There is still a long road before we see Dwayne Johnson on the big screen in the role of Black Adam, but when that time comes it will be exciting to see. He has been hard at work to prep for this role, and the grind will be paying off soon.