Does he look 22 or 40? Kenny KO discusses if gear ages bodybuilders. 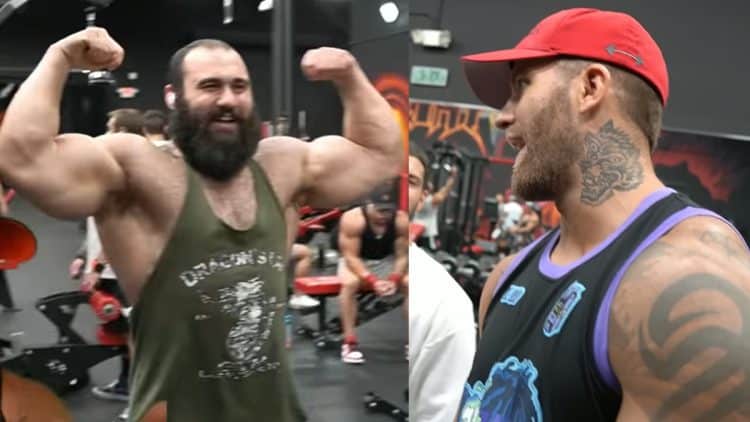 Influencer Kenny KO believes bodybuilders who use gear generally age faster than their natural counterparts. In a recent video shared on YouTube, Kenny KO examined how gear ages bodybuilders and guessed whether the athlete he used an example was 22 or in his forties.

Well known for his controversial content, Kenny KO established himself as a commanding voice in the fitness industry throughout the last few years. He first gained notoriety for his infamous ‘natty or not’ videos, where he routinely asks athletes and bodybuilders if they use steroids.

In one of his latest features, he met with bodybuilding veteran Mike O’Hearn. For over 30 years, Mike O’Hearn has maintained an incredibly ripped and aesthetic physique. He’s 53 years old yet he sports a body that would suggest he’s much younger. O’Hearn claims that he’s been natural his entire life, and competed in the sport of bodybuilding decades ago, where he managed to earn the Mr. Universe title on four occasions.

During their encounter, O’Hearn told Kenny KO that genetics aren’t the only reason why he’s able to keep up with such an impressive build. Kenny also asked if he uses testosterone replacement therapy (TRT) but Mike denied that as well. O’Hearn believes his current physique is a byproduct of the ‘choices’ he made when he was younger.

With the exception of Mike O’Hearn’s appearance, Kenny KO contends that many bodybuilders are aging faster due to using steroids. In his latest video, he used a 22-year-old as an example.

In a recent YouTube video, Kenny KO prefaced the discussion by saying 22-year-olds generally have a “youthful appearance.” However, he says the bodybuilder he’s using in the video looks 10 or 15 years older than he actually is due to steroids.

You can find a clip of the bodybuilder he’s referencing below:

“It brings the question into mind, is gear or anabolics worth it when you get to a certain level because a 22-year-old kid… you’re supposed to have a youthful appearance, you’re supposed to just be getting out of high school into your college years. This is supposed to be like the time when you’re growing and developing and you still definitely without a doubt have your youth. You’re still incredibly young,” says Kenny KO.

Kenny KO shared that after he made the video, tons of commenters were taken aback by the bodybuilder’s young age.

“Over the past couple of years, he’s aged, what seems like 10 to 15 [years]. Once again, this is no disrespect. If that’s what he wants to do with his life, by all means, I encourage it. Live your life to the fullest. Do what you want to do. If that’s what makes you happy go for it,” says Kenny.

It should be noted that Kenny KO doesn’t believe all bodybuilders are aging faster due to excessive gear use. But he does believe athletes in Men’s Open, Classic Physique, and Men’s Physique go ‘super hard’ in terms of anabolic use.

“If you’re running your cycles… or you’re gear – you’re stepping your little feet through that door of becoming unnatural. You’re running reasonable dosages; you’re not doing anything super crazy; you’re just trying to further your physique ever so slightly.

You’re probably not going to run into severe aging but if you’re on the other end of the spectrum where you’re abusing — you’re going super hard to try to become a Pro bodybuilder or you’re doing Open bodybuilding, maybe even Classic Physique or Men’s Physique at this point, because these men are damn near as a big as the Classic Physique competitors, and if you’re just blasting — like non-stop, not taking time off, I guarantee you, you’re going to age so incredibly quick,” Kenny KO shared.

He stressed that not enough athletes in the sport are getting regular health screenings.

“Of course, most bodybuilders – everyone, is going to look aesthetic on the outside right. They’re going to look muscular, vascular; you’re going to see muscle striations, all is fine and dandy, but the majority of these people aren’t doing blood work,” says Kenny.

Kenny believes bodybuilders are “destroying themselves internally” to look good on the outside.

What happens when you destroy yourself internally, is then on the external, your body starts to show it. You start to age faster. You start to look more withered down. I really think that’s the case of what happened with this young 22-year-old.”

In addition to advanced aging, Kenny asserted that male-pattern baldness is also sped up from gear use.

“Once again, that’s his choice. If that’s something he wants to do, by all means, go for it. But I want people to be aware that if you are going to abuse, or you’re going to go super crazy on compounds and you want to become a Pro bodybuilder and you’re running the craziest cycles — it will aid you and it will speed up the process.”

“If you’re taking anabolics or you’re taking gear, a lot of the compounds are going to speed up the process of male-pattern baldness,” says Kenny. “Maybe you’re 22, like this guy, and you’re already having the hairline of someone that’s like in their 40s or 50s.”

The last time we heard from Kenny KO, he discussed former kickboxing champion Andrew Tate calling bodybuilders “gay” and ‘pu**y cowards’ afraid of combat sports. While Kenny agreed that there might be an “element” of truth to some of those statements, he said many bodybuilders start in the sport to improve their overall health.

After using a 22-year-old bodybuilder as an example, Kenny suggests using gear can cause people to age faster if used in excess. However, he believes only those who partake in “crazy cycles’ need to worry about accelerated aging.