Powerlifting and bodybuilding coach Eugene Teo walked his YouTube audience through the final arm workout he did with the late John Meadows. 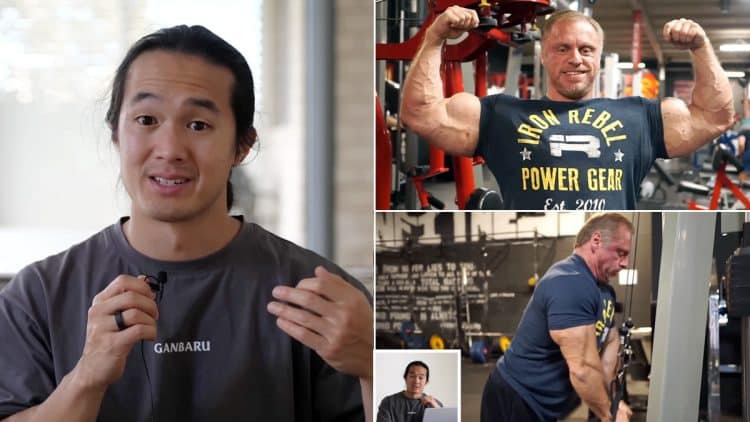 Powerlifting and bodybuilding coach Eugene Teo is well respected in the fitness industry, a reputation he’s earned with thorough and exhausting training methods. In a recent video shared on YouTube, Eugene guided his followers through an arm workout demonstrated by the late bodybuilder, John Meadows.

One of the primary reasons why athletes seek out Eugene Teo’s workouts is because of the safe and sustainable approach he takes to building muscle. With over 400,000 followers on Instagram and 497,000 subscribers on YouTube, the fitness guru reaches a large audience. He’s proven he has the knowledge to help others reach their next level fitness goals.

Last year on August 8, 2021, bodybuilder John Meadows passed away peacefully in his home. His untimely and unexpected passing at 49 years of age sent shockwaves throughout the bodybuilding community. It was later revealed that he died as a result of a heart attack due to massive blood clots in his arteries.

Meadows was revered for his toughness and ability to stand on stage in the face of injuries. However, according to Eugene Teo, the bodybuilder was also celebrated for his effective muscle-building techniques. This was the last workout Eugene had the pleasure of performing alongside the “Mountain Dog.”

During the workout, Meadows started with triceps pushdowns while keeping his palms down with his arms flared outward.

“John’s variation will give you a little bit more stability and allow you to lift the most weight on the pushdown,” says Teo.

The bodybuilder moved on by supersetting with bodyweight skullcrushers.

“I think it may be to do with how the kettlebells are pulling you into this flexed shoulder position constantly, because they’re always pulling you backwards towards your head, which means your body has to activate the shoulder extensors a little bit more throughout the entire movement, especially in that lockout position,” he says. “This means that your rear delts, your lats, and even your triceps will be activated a little bit more.”

It wouldn’t be an arm day without barbell curls. Teo explained that starting with a high rep count exhausts the muscles. As they fatigue, the two push as many quality reps as possible without sacrificing form until reaching partial failure.

“John always liked this idea of getting in a certain amount of blood flow and a strong pump to his muscles early on in a workout, and then he’d go into a couple of hard sets where he’d really push his intensity,” Teo shared. “It was all planned out in a way that was methodical to ensure we’re getting as much stimulus as possible, while minimizing the extra fatigue that may be accumulating in the joints.”

Before finishing the training session, John and Teo practiced machine preacher curls, which was a go-to technique for the late Meadows.

“We’d push to a failure point, and then we’d hold the stretch in the mid-range position for as long as we could stand, whilst actively trying to flex up against the weight,” he says.

“This is something best left for the end of the workout… and typically on exercises where you’re less prone to cheating or using other muscles you don’t want to be contributing.”

While his health ultimately led to him hanging up his posing trunks, Meadows still loved the sport of bodybuilding. He helped train 212 Olympia champion Shaun Clarida.

Teo learned a lot from the bodybuilding staple. John always attacked training sessions with a fair degree of detail and the results showed throughout his decorated career. Judging by the unseen footage presented by Eugene, it’s safe to say Meadows had a unique understanding for the mechanics involved in lifting weights and building muscle.