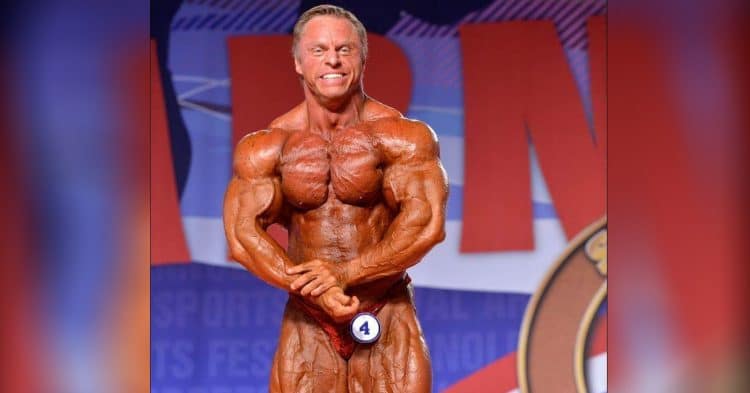 Well-known bodybuilder and entrepreneur John Meadows suffered a heart attack Monday at age 48. And according to his wife Mary who’s providing updates on Facebook, it was discovered that he had two clogged arteries. She explained that it was likely connected with a blood disorder back in 2005 that required the removal of his colon.

BREAKING: John Meadows a Beloved Bodybuilder And Coach Has Passed Away at 49

But, it apparently has not been confirmed whether this was the exact cause for the clotting, although likely. Below was the initial post from yesterday after he was taken to the hospital.

This is Mary, John has suffered a heart attack today. His blood vessels appear to be fine. Potentially a clotting disorder with his blood. He is in the hospital now. Please keep him in your prayers. Thank you!

Mary followed up with an update on Meadows’ condition after learning that there was no plaque build-up in the arteries but rather, it was confirmed that there were “2 massive blood clots blocking 2 arteries,” she wrote.

As of this recent update though, they have been able to clear one of those arteries but we’re not sure if they’ve started on the other as of yet.

Update on John's condition. His arteries have no plaque buildup, but he did have 2 massive blood clots blocking 2…

“Update on John’s condition. His arteries have no plaque buildup, but he did have 2 massive blood clots blocking 2 arteries. He has been in constant pain, but today they were able to clear one of the arteries. They are going to try again tomorrow on the other. This could be tied to the blood disorder from 2005 when he lost his colon. Thank you all for your continued prayers and support in these hard times. Please help me get the word out and share.

John Meadows wife gives out another update earlier today on her husband’s health:

Update on John. As I mentioned yesterday one of the clots he had dissolved yesterday from the blood thinners thankfully. The other one will hopefully dissolve today on its own. They decided to not go in with a cath today, as things are going well. He is in less pain today also which is a good sign. They are running alot of different tests on him tomorrow to see if they can get a better idea of where the clot started. These are many of same tests they ran in 2005. So no surgery, no stints and hopefully full recovery. Thank you so much for all the kind messages.

They did test him for covid and he was negative.

Update on John. As I mentioned yesterday one of the clots he had dissolved yesterday from the blood thinners thankfully….

Meadows has received a lot of support during these very trying times. Current Mr. Olympia Brandon Curry and top Pro Steve Kuclo were just two of several people to show their concern. But he has many wishing him a full recovery, as do we here at Fitness Volt.

We’ll be sure to provide updates on John Meadows’ condition as we learn of any new details.

There have been a lot of unexpected and untimely deaths in the sport of bodybuilding, over the last several months....

The bodybuilding and greater strength sports community was collectively heartbroken to hear the news that John Meadows had passed away....

The bodybuilding world was rocked to its very core at the news that John Meadows had passed away. Now we...