Before taking his talents to the 2022 Texas Pro, Andrew Jacked got the help of bodybuilding legend Flex Wheeler and Milos Sarcev for posing lessons. 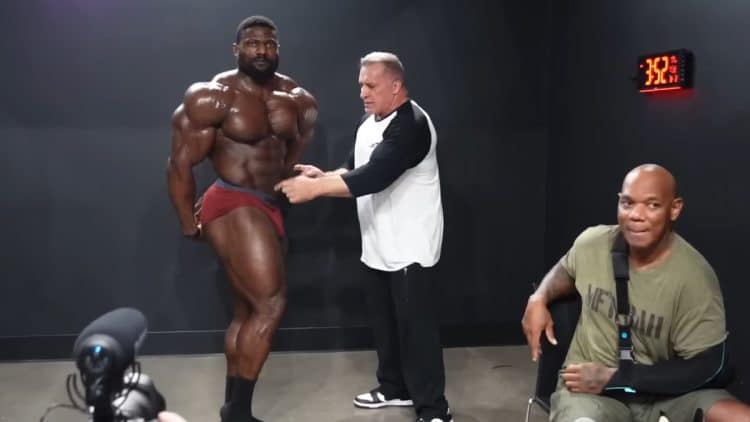 Bodybuilder Andrew Jacked is one of the sport’s fastest rising stars since earning his pro earlier this year. In a recent video, Jacked met with bodybuilding legend Flex Wheeler and Milos Sarcev for a detailed posing lesson.

Jacked has been open about his preparations. The bodybuilder shared a shredded physique update last week. In addition to Wheeler, Andrew is working with decorated bodybuilding coach George Farah to assist him with the nutritional aspects of the sport.

Jacked has been intensely training for his pro debut as a Men’s Open bodybuilder in the IFBB Pro League. He recently shared a high-volume chest and triceps workout, which highlighted the level of commitment he’s applying to his current season. With a tall frame and aesthetic physique, Andrew is ready to do some damage when he finally gets on stage at the 2022 Texas Pro this weekend.

In a video featured on Andrew Jacked‘s YouTube channel, legend Flex Wheeler and Milos Sarcev offer posing instructions ahead of his pro debut.

After practicing a hand-clasped most muscular, Sarcev told Andrew to make sure he feels comfortable during the pose as that is how to garner the best results, according to the veteran.

Milos explained that it’s hard for Jacked to look bad in a most muscular pose because of his enormous arms and popping delts. Before moving on, Milos told Andrew to flex his pecs to make his chest look more full on stage.

Wheeler and Sarcev guided Andrew on where to place his feet while posing.

“He’s going to do both like we do. Pull up first and then smash. Your foot, so remember, we can throw a front kick heel, and I saw you doing that pose right. Where you can throw a front kick. It’s kind of like, I don’t know if they care now but when were amateurs, judges hated to see our feet. Some people feel more contraction when they pull up. I know Jay [Cutler] always did it, with his Flintstone feet.” Wheeler said.

For their next pose, the group focused on a front relaxed pose. Wheeler warned Andrew to be careful because people like to over exaggerate their lats.

“Yeah. People over exaggerate and all that does is show how big your lats are. Just do a relaxed pose and squeeze the pecs.” Wheeler said.

“This is wonderful.” Sarcev told Andrew. “Same thing from the back. Wheeler said.

According to the four-time Arnold Classic champion, bodybuilders flare out their back too much while practicing the front relaxed pose.

“I don’t know why people try to do that. Even in Classic Physique, they are like way out here — it’s stupid man.”

Flex believes when you open your arms too wide it takes away from lat thickness. Milos says one of Andrew’s only issues with the front relaxed pose is not showing off his lats enough. Known for his electrifying stage presence, Wheeler told Andrew make sure to be smiling and inviting on stage.

“Start finding your personality. Smile. You want to be inviting. You smile. What does a boxer do when you get popped in the mouth? They smile. They know they got you.” Wheeler told Andrew.

Flex Wheeler stressed how important each and every moment is while presenting a physique to judges.

“Remember, in between every pose is an opportunity to show yourself. Alright. Quarter-turn. Stand proud. Squeeze the glutes.” Wheeler shared.

Milos and Wheeler also had Andrew practice a back double bicep pose. Wheeler offered Andrew some tips and guided Jacked on how to activate the “inner muscles” of the upper back. Wheeler told Andrew not to forget about showcasing his incredible lower body, especially his calves.

Flex continued to stress the importance of ‘minding yourself’ in between poses. Milos instructs Andrew to transition to a most muscular hands on hips pose.

“Remember to activate the biceps.” Wheeler said. “Squeeze the pecs harder. Squeeze harder. See, more comes in. From there, don’t contract. The same way, so your lats are massive like this. Remember it’s not a contraction down here, so it’s actually an expansion pose, then just squeeze. That looks great, just bring that one arm in.”

“It’s all in your shoulders.” Wheeler added.

Sarcev asked Jacked for a side-triceps pose next.

Milos offers Andrew more guidance on where to place his feet to maximize his efforts while posing.

“When you hook the triceps, bring it in.” Milos explained.

Sarcev said foot placement is important when hitting the side triceps pose.

“Remember to pinch that leg inward because you’re still showing your width. You got the flexibility to do it.” Wheeler added.

When asked by Flex what his current weight is, Andrew Jacked revealed he is weighing “290-pounds”.

Jacked will be tasked with facing a tough lineup of talent at the upcoming Texas Pro. Kamal Elgargni, a former 212 champion, who made the switch to the Open class, is looking to win his first Open show after placing second behind Akim Williams last weekend at the 2022 Tampa Pro.

Consistent top finisher Steve Kuclo will return at the Texas Pro as he looks to earn his Olympia qualification. Steve has also kept fans up to date on his progress this season. The Open bodybuilder shared a promising physique update, and he looks to have added some quality muscle.

RELATED: Andrew Jacked Praises Larry Wheels for Helping Shape Bodybuilding Career: ‘He Will Push You Past Your Limits’

Jacked’s posing lessons from Wheeler and Sarcev will be put to the test this weekend. Judging by the overall package of Jacked, he will be a difficult opponent to contend with in Texas.