Losing body fat is the only real way to get a six-pack. But, even when your abs are showing, you can still end up with a bloated abdomen. We reveal the possible causes and the most effective solutions for bloated abs. 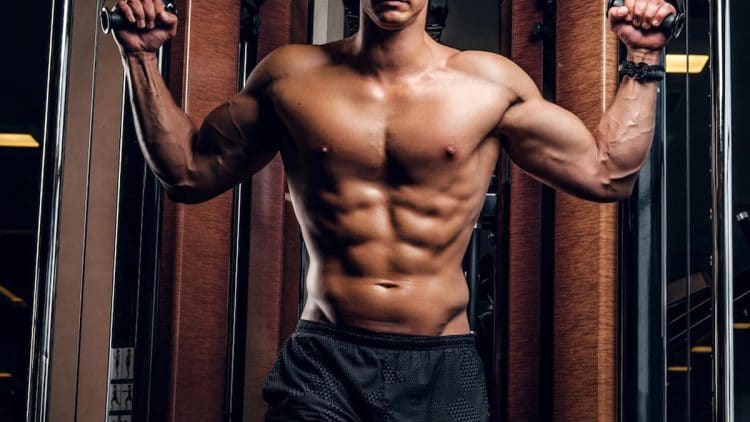 If you want a six-pack, as so many exercisers do, you’ll need to train and diet to lose fat and get lean. When your body fat nears 10% or less (men) and 15% or less (women), your well-developed abs will literally shine through in all their glory. So, the leaner you are, the more defined your abs will be.

However, a low level of body fat and muscular abs are only part of the equation for a great-looking midsection. It also needs to be flat.

Unfortunately, a lot of exercisers experience occasional and even frequent abdominal bloating, which can detract from the leanest six-pack.

We’re not talking bodybuilders with HGH abdominal distension here, which is all too common in pro-bodybuilding. Instead, we’re talking about fit and healthy recreational exercisers who experience temporary bloating even though they are pretty lean.

In this article, we reveal the leading causes and best solutions for bloated abs.

The Most Common Causes of Bloated Abs

Broadly speaking, bloated abs are caused. By one of two things:

If you suspect you have a hernia or have localized pain in your abdomen, you should seek medical attention for your bulging abs. Do NOT press on the bulge as it could be protruding internal organs coming through your abdominal wall. 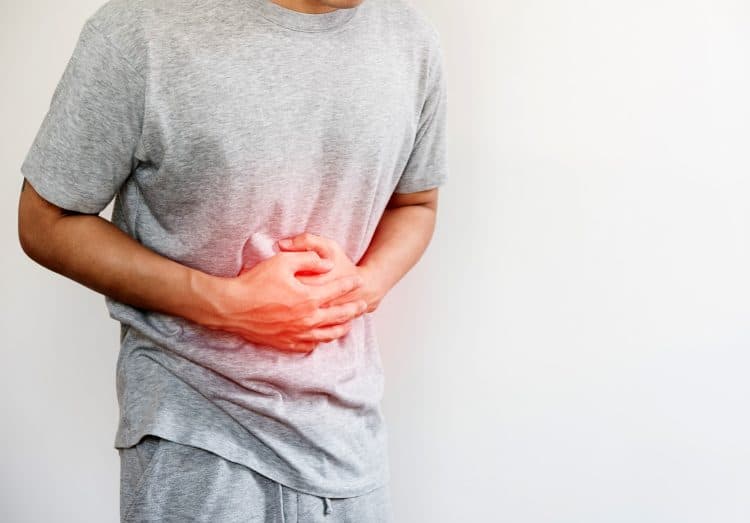 Similarly, if the bulge is in the center of your abdomen, you should also seek medical attention. This is called diastasis recti and happens when the line of ligamentous tissue that separates the sides of your abdomen comes, called the linea alba, “unzipped.”

Diastasis recti is common during pregnancy but can also be caused by an inherent weakness in the abdominal wall. As such, it can affect men and women, although it’s more common in the latter.

A severe blow to the abdomen can also cause swelling and bloating. If you play contact sports, do boxing, martial arts, or MMA, or recently fell and injured your abdomen, bloating could be the result. There is also a danger of internal bleeding, which MUST be investigated as soon as possible as this is a serious medical issue.

Having eliminated the more serious causes of bulging abs, we’re left with gastrointestinal issues being the reason that your abs bow outward instead of being flat.

The good news is that these issues are usually easy to treat and often avoidable.

You are what you eat, or so the saying goes. So, if you are bloated, it’s more than likely because of something you’ve eaten or something you haven’t been eating enough of. Addressing your diet will often fix abdominal bloating.

Gastrointestinal causes of bloated abs include: 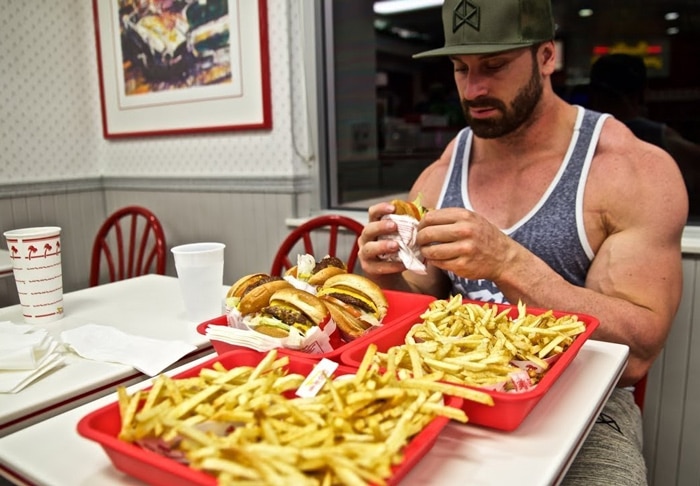 Most bodybuilders and fitness enthusiasts enjoy the occasional cheat meal. For the uninitiated, this is a meal during which you forget all about eating healthily and enjoy some of the foods you’ve been depriving yourself of.

Cheat meals are both psychologically and physiologically rewarding and can make sticking to a strict diet much more tolerable.

However, suddenly dumping loads of junk food in your stomach could mean that your abdomen swells. After all, that food has got to go somewhere, right?

Unfortunately, junk food is notoriously low in fiber, which means it may stay in your stomach and intestines for longer than usual. Combined with the sheer volume of food, slow digestion will add to abdominal bloating.

By all means, continue to enjoy the occasional cheat meal, but don’t go overboard and binge until you are full to the max. Practice some self-restraint at the all-you-can-eat buffet, or buy cheat foods in smaller portions, so you are less likely to consume too much.

Also, consider having several smaller cheat meals a few hours apart rather than one colossal cheat banquet to avoid overloading your digestive system.

Finally, consume plenty of plain water and fibrous foods to help your body “push out” food waste in a timelier manner. Constipation is a common cause of bloating.

Intestinal gas is normal, but trapped wind can cause bloating. It’s like inflating a balloon in your stomach! 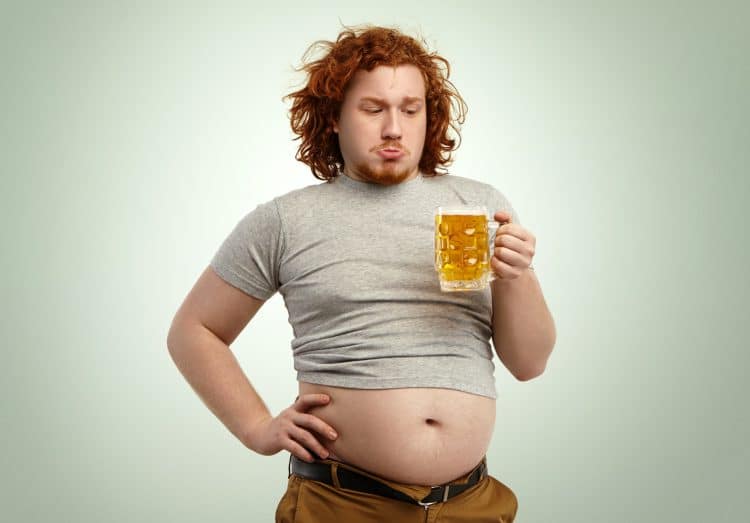 There are several ways to minimize trapped wind and the bloating it causes. Firstly, eat more mindfully and slowly. Chew each mouthful thoroughly, and don’t rush your meal. And while it’s okay to talk while you eat, avoid eating and talking simultaneously, as you’ll end up swallowing more air.

You should also endeavor to sit up straight when eating, preferably at a dining table. Slouching over your food while sitting on your sofa increases the risk of trapped wind as food will not be able to move so easily through your digestive tract, leading to a build-up of gasses.

You may also notice that carbonated (fizzy) drinks tend to make you feel bloated. That’s hardly surprising given their gas content. While the occasional soda probably won’t do you any harm, it’s usually best to avoid large servings of fizzy beverages if you are concerned about bloating abs.

Finally, consider reducing or eliminating FODMAP foods from your diet. These foods are linked to increased incidences of abdominal bloating. Common culprits include:

These foods ferment in your stomach and release intestinal gasses, leading to bloating.

Food digestion issues can result in inflammation and bloating. For reasons that are unclear, certain foods can have an almost allergic effect on some people, while they have no impact on others.

The most common culprits are grains and dairy that contain gluten and lactose, respectively.

Gluten and lactose intolerances have become increasingly common, possibly because of an overreliance and subsequent over-consumption of these two food groups in recent years.

Regardless of the cause, eating gluten-rich grains or high-lactose dairy could cause abdominal bloating in some people.

Try eliminating gluten and lactose-rich foods for a few days and see if your abdominal bloating subsides. If it does, introduce small amounts of one and then the other potential source of bloating to determine which one is responsible for your abdominal issues.

You may find you can eat small amounts of both of these substances, and it’s only when you consume too much that your stomach rebels. Or, you may discover that you cannot tolerate them in even small amounts without triggering bloating and will need to replace those foods with gluten and/or lactose-free alternatives.

Eating Too Little or Too Much Fiber

Fiber is critical for digestive health, but you could find yourself suffering from abdominal bloating if you consume too little or too much.

Eating too little fiber will slow the movement of food and waste material through your digestive tract. This not only fills your abdomen with solids but also allows food waste to ferment and produce intestinal gasses. Both issues could cause or exacerbate bloating.

Too much fiber can just leave you feeling very full. Fiber is indigestible plant material, and eating it adds bulk to your digestive waste. Needless to say, too much fiber could cause a mild intestinal blockage, causing virtually the same issues as eating too little fiber.

So, while fiber is your digestive friend, eating too little or too much could cause abdominal bloating. The recommended daily amount for fiber varies according to age and gender. Still, most men should aim for 30-38 grams a day, while women usually need 21-25 grams per day. Consuming significantly more or less could result in bloated abs. 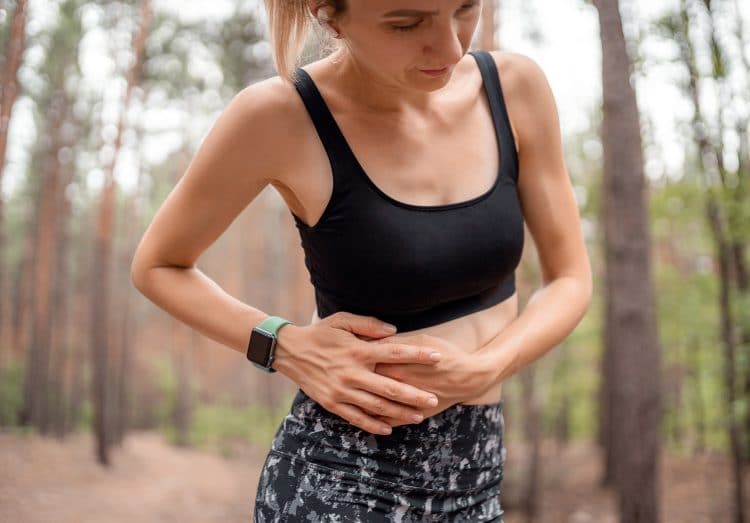 The definition of constipation varies from person to person. For example, some people have a couple of bowel movements per day, while others only poop 3-4 times a week. So, constipation usually means irregular bowel movements, difficulty pooping, or a noticeable change in your normal bowel movement schedule.

Common causes of constipation include:

Being constipated means undigested food accumulates in your digestive system and, needless to say, this can lead to bloated abs.

If you are constipated, seek natural remedies to help you return to your regular pooping schedule. Good options include drinking coffee, a tablespoon of olive or mineral oil, psyllium husks, and light exercise, e.g., walking or jogging. Exercise stimulates the digestive system.

Your digestive system contains millions of bacteria, some good and some bad. The good bacteria help with the digestive processes, is involved in immunity, and plays an essential part in your general health and well-being. In contrast, if allowed to run riot, bad bacteria can cause a whole host of problems, most of which affect your digestive system.

A diet high in junk food, especially sugar, plus overuse of antibiotics, can cause a decrease in good bacteria and an increase in bad bacteria. This imbalance could be the cause of your bloated abs.

Thankfully, increasing good bacteria and decreasing the bad is a relatively straightforward process. However, it may take a few weeks to restore your internal bacterial balance.

Lower levels of harmful bacteria by cutting down and even eliminating junk food from your diet. Definitely reduce your intake of refined sugars, which are a leading cause of increased bad bacteria.

Raise your levels of good bacteria by eating natural yogurt, fermented vegetables such as kimchi, pickles, or sauerkraut, or taking a pre and probiotic supplement.

Getting Rid of Bloated Abs – Wrapping Up

Abdominal bloating can be distressing, especially if you’ve worked really hard to get lean and develop a six-pack. After all, you want a flat, lean midsection, not a bulging belly! Bloated abs can also be uncomfortable and even painful depending on the cause, severity, and duration.

Avoid bloated abs by removing any known triggers from your diet. Also, do your best to maintain a healthy digestive system, drink plenty of water, eat enough (but not too much) fiber, and exercise regularly.

However, because there could be an underlying medical cause of your bloated abs, speak to your doctor for additional advice if the problem persists. Don’t worry, though; in most cases, bloated abs are easy to prevent and treat and nothing to be concerned about.

The 15 Best Abs Exercises You Can Do Anywhere and Anytime

Most bodybuilders train their abs at the end of their workouts. This makes a lot of sense because the abs...

Do Squats Work Your Abs?

Squats are arguably one of the most productive exercises you can do. Entire workouts have been written around squats, and...

When it comes to abs training, it’s all too easy to fall into the trap of doing the same old...

Charles Glass is notorious for extensive and detailed exercises that highlight muscle contractions. The Godfather of Bodybuilding recently shared an...