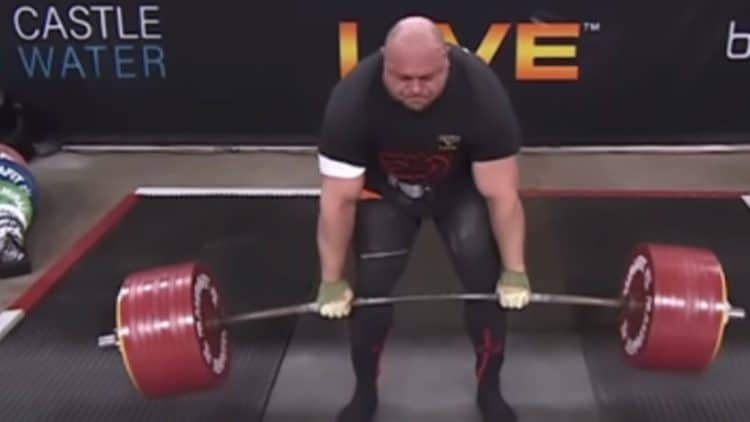 A big payday awaits Strongmen and any athlete who succeeds at the 2022 Giants Live Open deadlift challenge set for August 6, 2022. The organization announced Tuesday that they will pay out $55,000 to anyone who can successfully deadlift 505kg (1,113.3 pounds) at their next competition this summer.

2021 Giants Live World Open hosted the World Deadlift Championships (WDC) last year. Making a return on Aug. 6, 2022, at the Motorpoint Arena in Cardiff, Wales, WDC is back. As it stands, the show will likely function as its own event at the 2022 Giants Live World Open. In 2021, the promotion offered a similar prize with participants being awarded $50,000 for a successful 505kg deadlift.

The all-time world deadlift record has been largely untouched since Hafthor Björnsson shocked the world in 2020. The Icelandic titan broke 2017 World’s Strongest Man Eddie Hall’s deadlift record by two pounds with his famous 501kg deadlift. With a big payday to any athlete who can break Hafthor’s record by four kilograms, surely the 2022 Giants Live World Open will be packed to the brim with some of the greatest talent available in strength sports.

Hafthor Björnsson’s Deadlift Record to be Challenged at Giants Live

With a bounty of $55,000 hanging in the balance, a commanding lineup of athletes will likely be in attendance looking to make powerlifting history. Giants Live World Open posted to their Instagram page Tuesday that they will be offering a massive payday to any athlete who can deadlift 505 kilograms (1,113.3 pounds).

👉 Do YOU have what it takes to deadlift 505kg and win $55,000?
👉 Want an invite to the 2022 World Deadlift Championships on August 6th in Cardiff?
👉 Email [email protected] telling us why YOU should get the chance to prove yourself against the World’s Strongest Men!
Wildcard invite entries close 1st June 2022. Giants Live shared.

The Giants Live organization is accepting emails to [email protected] for those who believe they can break the all-time world deadlift record. Wildcard invitations close on June 1, 2022. Since the deadlift world record was set, only a few men have nearly joined the exclusive 500kg deadlift club.
One of those names is Ivan Makarov. The powerlifter is one of Russia’s deadlift specialists and has pulled off some amazing feats of strength. Ivan came close to breaking the record in 2020 at the World’s Ultimate Strongman (WUS) series. He narrowly missed an attempt of 502kg. In preparation for the 2021 Giants Live contest, Makarov pulled a 430kg massive double which illustrated how serious he takes his training.

Meanwhile, Iranian strongman, Peiman Maheripourehir also established himself as one of the major players that could topple the deadlift record. At the 2021 WRPF World Championships, Peiman managed to deadlift 481 kg (1060.4 lbs) during the competition.
RELATED: Powerlifter Jamal Browner Pulls Bar-bending 410 kg (904 lbs) For A New Three Rep PR
Another deadlift specialist that could pose a threat to the world record is Jamal Browner. Recently, Jamal broke his personal record on the deadlift after pulling 483 kg (1065 lb) in training. The powerlifter continues to push the limits and has shown that his strength is on par with many other Strongman athletes. With a $55,000 payday to any athlete who can deadlift 505kg this August, Giants Live is upping the ante in 2022 in a big way.
For the latest news and updates please follow us on Instagram, Facebook and Twitter.
FacebookTwitterRedditFlipboardLinkedIn
Categories: News Strongman
Previous Post