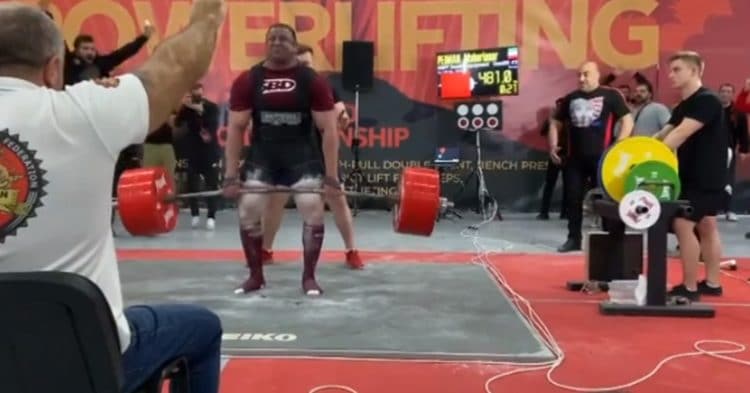 Iranian strongman, Peiman Maheripourehir, managed to deadlift 481 kg (1060.4 lbs) in the special deadlift element of the 2021 WRPF World Championships held in Russia, from December 16-19, 2021. Peiman and Ivan Makarov were battling it out in the deadlift event, but Peiman managed to prevail after Ivan failed his 483 kg (1064.8 lbs) attempt. Peiman completed the lift with lifting straps and a deadlift suit, while also using the conventional stance. He also pointed out in the caption that he is going for a 510 kg (1124.4 lbs) deadlift, which would break Hafthor Björnsson’s infamous 501 kg (1104.5 lbs) deadlift world record.

Peiman Maheripourehir is a great deadlift specialist, and he managed to accomplish all three deadlift attempts successfully. Peiman’s first deadlift was 460 kg (1014.1 lbs), which he lifted very fast and effortlessly. His second lift was 477.5 kg (1052.7 lbs), followed by a colossal 481 kg (1060.4 lbs) deadlift. In conclusion, Peiman had done three very heavy lifts, and if he can balance his jumps in weight next time, then there is no doubt that he can lift even heavier.

Peiman Maheripourehir’s greatest achievements in the sport of strongman are probably his two participations in the World’s Strongest Man (WSM) competition. Peiman competed in the 2017 WSM and 2018 WSM, where he ended up 3rd and 5th in his group respectively, thus not qualifying for the finals in either of them. He competed against some great athletes in the competition, sharing the group with Zydrunas Savickas, Nick Best, Terry Hollands, and Hafthor Bjornsson. Peiman’s best event placing would be winning the ‘arm over arm’ event in the 2018 WSM.

Peiman Maheripourehir is also one of the biggest contenders for the deadlift world record, as he constantly performs some massive lifts. Peiman’s training PRs are 492 kg (1084.6 lbs) equipped deadlift, and a 450 kg (992.1 lbs) raw deadlift.

Related: Ivan Makarov Pulls A MASSIVE 430kg For A Double In Preparation For Giants Live

Peiman Maheripourehir is definitely capable of breaking the deadlift world record, and he is getting closer to it with every lift. If anything, Peiman does not lack self-confidence, as he is aiming to lift 510 kg (1124.4 lbs) which is 9 kg more than the current world record. Judging by his progression, 2022 could be a great year for Peiman Maheripourehir.