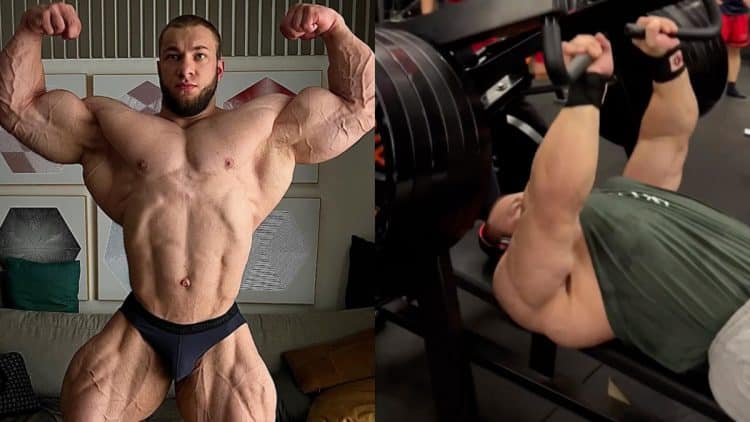 Vitaliy Ugolnikov, popularly known as “Good Vito,” has emerged as one of the most impressive young talents in the NPC. In a recent post made on Instagram, Vitaliy looks massive courtesy of a physique update eight weeks from his next bodybuilding show.

Ugolnikov made headlines in 2021 with a gigantic physique. While he was already massive, he continued to add more size in hopes of standing against other competitors in the Men’s Open division, which hosts some of the freakiest mass monsters in bodybuilding.

Fans have kept a close eye on Vitaliy during his time in the IFBB Elite Pro circuit. In Dec. 2021, the 25-year-old announced that he would switch over to NPC with the aim of earning a pro card. He is determined to compete in the IFBB Pro League and looks to be in great shape with his recent improvements.

‘Good Vito’ boasts incredible size that has helped him stand out from other bodybuilders on stage. Being in his mid-20s, Vitaliy has the time and potential to reach the pinnacle of the sport. However, in order for him to reach the IFBB Pro League, he will need to earn his pro card in the NPC.

In a recent post made on his Instagram, ‘Good Vito’ shared a physique update looking full and hard just eight weeks out from the NPC’s upcoming Muscle Contest show.

‘Good Vito’ argues against lifting lighter weights when cutting calories in preparation for a contest. He advised his 292k followers on Instagram to keep lifting heavy.

“The biggest mistake athletes make is reducing their working weights in exercise in the last couple of months before they come on the scene. As soon as you reduce your caloric intake, reduce your carbohydrate intake, and lower your exercise weight, you will begin to lose muscle mass.

In addition to ‘Good Vito,’ Slovakia’s Michal Krizo recently made the switch to the NPC. As it stands, he intends to earn his Pro card at the 2022 Amateur Olympia Italy contest. From there, his plan is to earn his invitation to Mr. Olympia by winning the EVLS Prague Show next month. Like Vito, Krizo is planning to bring the biggest package of his career.

‘Good Vito’ revealed last month that he was tipping the scales at 275-pounds (124.7 kg) in a massive physique update. Considering the improvements he’s made this season, Vitaliy is on track to bring an improved package to the NPC Muscle Contest event in eight weeks.