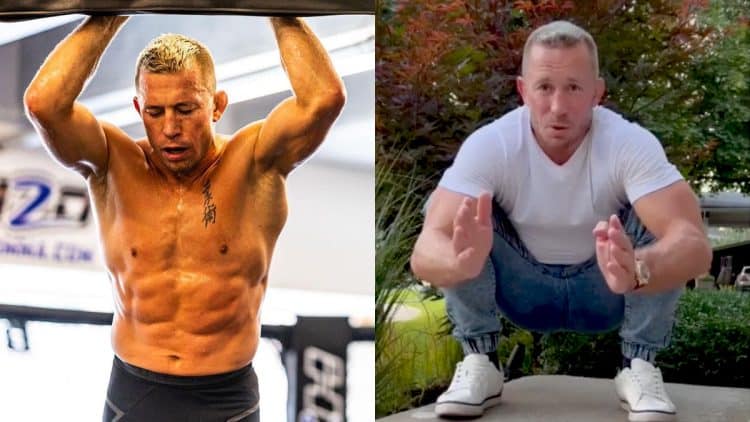 Former UFC two-division champion Georges St-Pierre is arguably the greatest mixed martial artist of all time. In a recent video posted on Instagram, St-Pierre tried the deep squat challenge and encouraged his followers to do the same.

GSP enjoyed one of the most decorated careers in MMA. Having made his UFC debut in Jan. 2004, St-Pierre quickly worked his way up the ranks to secure the welterweight title. He spent the majority of his career competing at 170 lb and stepped away from the sport in Nov. 2013 after a razor-thin win over Johny Hendricks.

That would not be the last time we saw St-Pierre inside the octagon as he returned after a four-year hiatus in Nov. 2017. GSP chose to go up a weight class to 185 lbs and challenge the division champion Michael Bisping at UFC 217. He defeated Bisping via technical submission in the third round to win the middleweight crown.

Although he was supposed to take on top contender Robert Whittaker for his first title defense, GSP announced his retirement in Feb. 2019 following a string of serious health issues after his return to competition.

Georges St-Pierre not only uses his “Superman” punch as an example of his strength and control, but he also uses other methods to demonstrate them. Frequently, he posts videos of himself performing pushup variations, calf exercises, and handstands on social media.

In a recent video posted on his Instagram account, Georges St-Pierre led by example as he encouraged his fans to try out the ‘deep squat challenge.’

“I suggest you take 30 seconds out of your life to try something that might help you,” he captioned the video.

GSP not only showed how the deep squat is done but also gave instructions on how to perform the exercise yourself. He revealed that it was not easy for him to do it at the start and that he had to build up his fitness level to do the challenge properly.

“Little challenge for you guys, going to take a deep squat position. Your feet as straight as possible, your heels as you stay on the floor and push out with your knee. You have to stay there for at least 30 seconds. I learned this exercise from Kelly Starrett.

“In the beginning, I couldn’t do it. It took me a few months with a lot of work. It’s very good for ankle mobility, to release the tension in your back, and for your posture. If you can’t do it, of course you can hold onto something or have the wall behind you. Try to breath by your nose and relax.”

The squat gets a bad rep among gym-goers who see it as an unnecessary movement that causes their knee or lower back injuries. However, a properly performed squat is very safe and provides many benefits. There are various versions of the exercise that you can do, such as the parallel, deep, shrimp, and prisoner squat.

Georges St-Pierre fought in his first after a 4-year layoff and he was successful in besting Michael Bisping for the...