The former Mr. Olympia believes Andrew Jacked will look 'bigger' and 'better' at 285 pounds instead of his recent stage weight of 292. 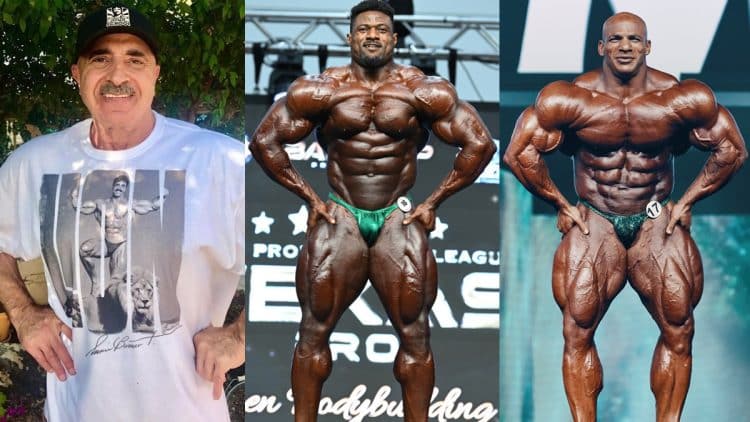 Veteran bodybuilder Samir Bannout has an eye for talent in the sport after retiring with a Sandow trophy he earned in 1983. In a recent episode of The Muscle Maturity Podcast, bodybuilders Bannout and John Hansen discuss Andrew Jacked’s future in the sport after dominating in his pro debut at the 2022 Texas Pro.

“There’s striations in the chest. His [Andrew’s] legs are cross-cut and separated, and his waist is small. I think this guy can be very very dangerous,” says Samir Bannout.

Under the tutelage of bodybuilding legend Flex Wheeler and coach George Farah, Andrew Jacked continues to find success on stage. In addition to receiving posing instructions from Wheeler, Andrew also enlisted the help of seven-time 212 Olympia winner Flex Lewis and bodybuilding guru Milos Sarcev at The Dragon’s Lair gym. Andrew sports a 6″2′ frame and has an aesthetic physique, especially for a Men’s Open competitor.

In March, Jacked earned his IFBB Pro card by claiming the 2022 Arnold Classic Amateur Overall Bodybuilding title. Preparing for another show, Jacked threw his name into the Texas Pro hat. Many were curious to see how Jacked would handle himself against elite-level competition.

By the end of the contest, Jacked walked away with his Olympia invitation after a dominant performance. Runner-up Martin Fitzwater and third-place finisher Steve Kuclo presented conditioned packages, but Andrew’s size proved to be a determining factor in the show’s outcome. Following the massive victory, the bodybuilding community, including Samir Bannout, shared their thoughts on the rising prospect.

Samir Bannout on Andrew Jacked’s Recent Contest Weight: ‘Can You Imagine Arnold at 292 Lbs in That Condition?’

In a recent podcast episode, Bannout and John Hansen gave their opinion on Andrew Jacked‘s potential in the IFBB Pro League.

“I was absolutely blown away. I saw his pictures and stuff at Flex Lewis’ gym. I know there was a lot of hype for him coming in. Hansen said. But man, when I saw him in the comparisons in the videos next to everyone else.

He just blew everyone away. He was so big, so wide, I mean, he’s got muscle everywhere, and his abs were so deep — this guy, even some of the poses, he kind of looks like a bigger Flex Wheeler. He does that front double and kind of leans to one side. This guy… he’s a monster.” John Hansen said.

Hansen revealed that Jacked’s plan is to come into the 2022 Arnold UK next month with an even better look.

While Samir Bannout believes Jacked’s back could be sharper, he agrees that Andrew’s future in the sport is bright.

“At almost 300 pounds man… this is 292 we’re talking. 6″2′. I mean, Arnold Arnold, let’s say almost 6″2′ but can you imagine Arnold at 292 in that condition?” Samir said. “It’s incredible. It’s really incredible. He looked pretty wasted to me. He could be a little more sharper looking at him from the back. A little bit hazy, it could be a little sharper.”

After hearing Andrew weighed 292 pounds on stage, Bannout suggested that the Open class bodybuilder should shed six or seven pounds, which he says would actually make Andrew look bigger and better.

“Obviously, he’s doing things right. Just the fact, you know me, if someone looks good, I’m going to say it. He still remains wasted, he’s big and so great. I can see him competing at about 285 — he would look a lot better, yet he’s actually going to look a bit bigger at 285.” says Bannout.

“If he goes to the Olympia, I want to see him standing next to Big Ramy and Nick Walker. I mean with that height and that structure, he’s going to look so impressive, I think. He’s going to have obviously much better guys at the Olympia than he had here but he’s an exciting new prospect for sure.” Hansen told Samir.

Samir believes Andrew will be more dangerous at a lighter weight. The retired pro says Jacked will ‘easily’ jump into a top four spot when he takes on Olympia.

“I think five to seven pounds leaner with thinner skin — I mean, you’re right Nick. I can see separation. The delts are separated from the arms.” Samir said. “And he’s going to look a lot better minus six or seven pounds. I think he could be like among the favorites. He probably easily will jump in a top four spot.” Bannout shared.

Hansen told Samir that Andrew has the legs to stand next to Big Ramy, unlike 2019 Mr. Olympia Brandon Curry.

“And he’s got the legs too so when he stands next to Ramy… you know Brandon [Curry] has great shape, but Brandon is always going to come up short on the legs next to Ramy, whereas this guy has massive legs, and he’s going to be taller than Ramy.” John Hansen explained.

Given what Bannout has seen thus far, he believes Andrew has what it takes to automatically find himself in the top four at a Mr. Olympia contest.

“I think automatically he’s going to make it into the top four.” Samir Bannout said. “You know, I told you, it’s not about size for me but he is big and pretty balanced. His midsection is tight and small, so I would say top four easily.”

Before taking on his first pro show, Jacked spoke about the positive influence powerlifter Larry Wheels had on his growing career. The two have trained together and developed a brotherhood. Andrew appreciates Larry for helping him get accustomed to social media as well.

With the 2022 Arnold Sports UK show set for next month, fans will get a second chance to witness Jacked shake up the Men’s Open division. According to veteran bodybuilder Samir Bannout, Andrew Jacked will be a massive threat on the 2022 Mr. Olympia stage.