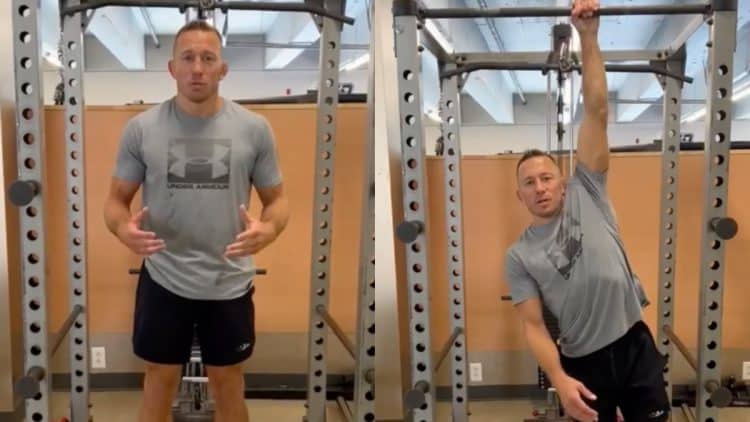 Georges St-Pierre is considered to be one of the best mixed martial artists of all time. However, besides being an extremely talented fighter, St-Pierre is still renowned for his fitness. Despite having retired from mixed martial arts, Georges St-Pierre continues to maintain his signature ripped physique by training rigorously and investing a lot of time in it. In a recent display of strength which he posted on Instagram, GSP shared the challenge of the week with his fans. He advised them to try the dead hang exercise that he’s using in preparations to do the one-armed pullup.

As a pioneer of Canadian MMA, St-Pierre pushed beyond the traditional boundaries of a fighter at the time. He got the chance to feature on the silver screen and grabbed a role in the 2014 Marvel comic book film, Captain America: The Winter Soldier. During his days of competing as a professional, he conquered the welterweight division (from 155 to 170 pounds) of the UFC and announced that he would be stepping away from the sport after nine title defenses.

Having left the octagon without a proper retirement, St-Pierre declared that he would be returning after a four-year hiatus for a move up in weight to challenge the former UFC middleweight (from 170 to 185 pounds) champion, Michael Bisping.

Although St-Pierre was not fighting in between, he was consistent with his training and stayed dedicated to keeping his fitness levels. The results showed as GSP defeated Bisping in his comeback and won a second weight class title in the promotion. St-Pierre had signed a contract to continue competing, but he chose to hang up his gloves due to a series of serious health issues. He was ultimately inducted into the UFC Hall Of Fame in 2020.

In a post made on Instagram, St-Pierre recommended his followers to try doing the dead hang exercise for 30 seconds as the challenge of the week. He revealed that he is using the exercise to train for performing the one-armed pullup.

“Alright guys, the challenge of the week. You know I’m working on doing a one-armed pullup and one of the basic exercises to do before being able to do a one-armed pullup is a dead hang for 30 seconds without letting yourself rotate. You have to always face the same direction.”

Georges St-Pierre regularly gives an insight into his training methods. He uploads instructional videos of himself performing various kinds of exercises and workouts while coaching about the proper technique on social media.

Last month, GSP challenged his fans to perform the deep squat as he demonstrated the move. He even shared some steps for those who may need to build up to doing the exercise.

Pull-ups and chin-ups are a staple in most strength training routines. They are also the exercises most beginners use to...

Pull-ups are one of the best back exercises around. Bodybuilders have long used them to build broad, muscular lats and...