Hadi Choopan shows off his insane physique, demonstrating the unbelievable conditioning and vascularity he has 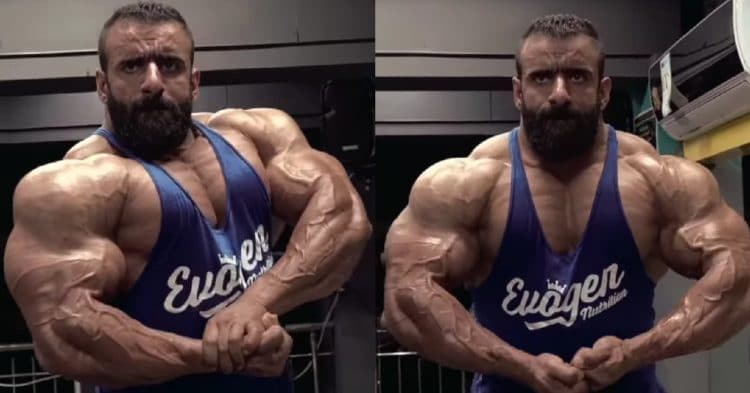 Just because Hadi Choopan is currently in his offseason, does not mean he is not still hitting the gym on a regular basis. He showed that this was true recently, with an update that left jaws on the floor.

It seems like every year, the anticipation to see Choopan realize his full potential just grows stronger. The former 212 competitor has looked incredible since moving to the Open, with a third place and fourth place finish at the Mr. Olympia to show for it.

For this year, things seem to be even more promising for the Iranian bodybuilder. The biggest struggles he has had for the last few years is getting into the United States in time to properly peak for the Olympia, but this year he has hinted at coming into the country early, piquing the interest of his fans.

Currently however, Hadi Choopan is in between contests, and enjoying the time off. That being said, he is still in unbelievable condition, as he showed with a recent update to his social media.

Posting to Instagram, the 33-year old showed off his current physique by hitting a variety of different poses. This gave a look at Hadi’s insane vascularity and shows that he is in tremendous shape.

It seems to be that Choopan is keeping himself busy, even if he does not openly have any competitions booked on his schedule. He looks to have just completed a workout, with the type of pump he has going on.

At the 2020 Olympia, Hadi came very close to scoring much higher than the fourth place that he ended the contest in. He bounced back from a mediocre night of prejudging to score second in the finals, which led to his somewhat controversial fourth place.

So it is apparent that Choopan is looking to fix the mistakes that he made last year, and fix the holes in his game. The workouts he has been doing may be enough to have him contend with the likes of Big Ramy, and the rest of athletes on stage.

If all goes according to plan, we very well could be seeing Hadi make it to the United States a few weeks before the Mr. Olympia this year, provided he gets an invitation. If this is the case, it could change everything with how he does overall.

Many people feel like Hadi Choopan has what it takes to become Mr. Olympia someday. He is definitely doing all he can to try to make that the case in 2021.

Get Back to Old School Training Without the Tech