Hadi Choopan showed a recent physique update that has people questioning his chances at winning the 2021 Mr. Olympia 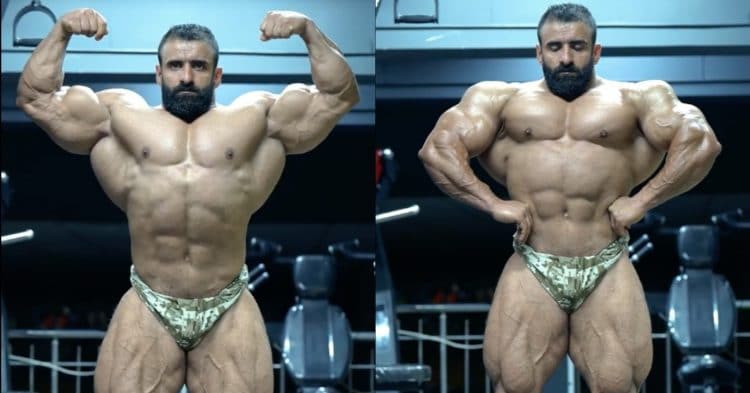 Many people feel like Hadi Choopan has what it takes to be the next man to be crowned Mr. Olympia. Those supporters were reminded of this, after a recent update from Hadi showed his insane conditioning.

Posting to his YouTube channel, Choopan shared a video of him posing, saying that it was the most recent update of his physique. This comes roughly 17 weeks out from the 2021 Mr. Olympia, slated for October 7-10th.

In this update, the Iranian bodybuilder runs through a variety of front and side poses, showing off his impressive conditioning. From here, it is clear that he is already in tremendous shape, with four months to go until the contest.

Even at this early stage of his prep, Choopan is in tremendous shape. He already has some decent separation in his quads, and he appears to have bulked up a little bit, though admittedly this could easily just be water weight.

Hadi already has one of the more complete physiques in the IFBB Pro ranks, and that was shown here as well. This perfectly goes hand in hand with some of the other updates seen from the 33-year old in recent weeks.

Does Hadi Choopan Have A Shot At The 2021 Mr. Olympia?

That is the question on everyone’s mind, especially after this recent update. The fact of the matter is, it seems like he does have a really solid shot at coming out victorious at this year’s Olympia.

In 2020, Hadi came in fourth place, behind Big Ramy, Brandon Curry, and Phil Heath. However there is a solid argument to make that he deserved to beat Phil, with Hadi being second overall during the Finals.

Heading into this year, Choopan is looking to end one of his biggest problems before it begins: travel issues. In years past, the Iranian has had a notoriously tough time getting his US Visa in time to compete, which has led to some less than ideal circumstances for his prep, in the days leading to the Olympia.

This year though, Hadi has revealed his plans to come into the United States early enough that this is not a problem. Provided he can do that, and judging by his physique at 17 weeks out, he is clearly on the right path.

Hadi Choopan has one of the most complete packages you will see on the Olympia stage. If he can put it all together this year, he will be a real threat to anyone competing.