As he continues to prepare for the upcoming boxing match with Eddie Hall, Hafthor Bjornsson shows off his killer new physique 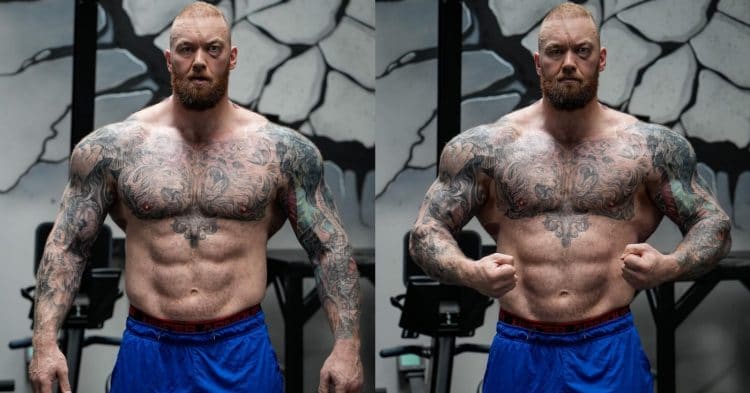 The constant progression that Hafthor Bjornsson has gone through while preparing to face Eddie Hall has been impressive to see. Recently he shared an update on his physique, and he is looking lean and mean.

As he has made the switch from strongman training to boxing, Bjornsson has looked leaner and leaner. He has been dropping weight like crazy, but as we saw recently he is still maintaining a large portion of his strength despite his mass being dropped.

Nevertheless the physical transformation that he has gone through has been incredible to watch unfold. By all accounts, he looks to be in the best shape of his entire life as he makes these changes.

The next stop for Hafthor Bjornsson is his second exhibition boxing match, which is against Simon Vallily on May 28th. The lead-up to this fight has seen him putting the skills together that are needed to find success in the ring.

With about three weeks to go until this bout, Thor decided to give his fans a glimpse at the way his physique currently looks, as well as how much he weighs. Posting to Instagram, he unveiled a trim looking 155kg (341.7lb) frame that has everyone buzzing.

It is crazy to think of how far he has come since Thor started this journey. Comparing him to the 454lb behemoth that earned the world record deadlift just over a year ago, he is almost a completely different person.

The weight loss of basically 118lb aside, Bjornsson has been putting in the work to increase his overall skills for boxing. His first exhibition, a draw against Stephen Ward, left some people feeling lackluster, but he looks to change those opinions when this bout comes along at the end of the month.

Judging by his posts on social media, the Mountain is putting a continued focus into his cardio, as well as his footwork for this sophomore effort. As such, He even decided to come out to Dubai, where the fight is taking place, nearly a month early.

It only makes sense that Hafthor Bjornsson would keep looking better as he hones his skills and rounds out his technique. That said, he is perhaps looking better than expected, as this fight with Simon Vallily draws closer.

Stay tuned to Fitness Volt for coverage on this fight, as the bout approaches, as well as continued coverage of the bout against Eddie Hall this September.