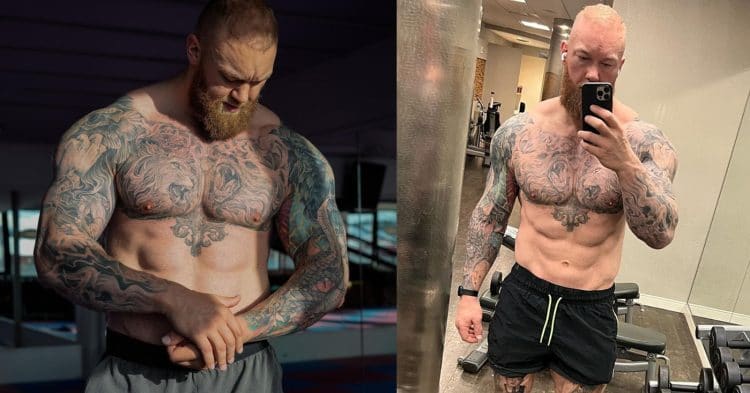 Strongman-turned-professional boxer Hafthor Bjornsson is wondering if he should try his hand at bodybuilding next! After his retirement from strongman sport, 5-time World’s Strongest Man Hafthor Bjronsson made a transition to boxing and currently holds a 1-0-2 record in exhibition boxing. Bjronsson’s boxing journey has been an exciting affair for a lot of people due to his extreme body transformation and adaptation to the sport as witnessed from his boxing matches and numerous training videos.

Bjornsson recently took to Instagram to voice his thoughts. Thor is currently reading bodybuilding legend and 8-time Mr. Olympia winner Ronnie Coleman’s autobiography. In the caption to his post, Bjronsson stated that he is inspired by Ronnie’s story and asked the fans if he should try his hand at bodybuilding.

“Should I try out bodybuilding after my boxing journey? Right now I’m reading @ronniecoleman8 book and I’m hooked. Love his story,” Hafthor Bjornsson wrote in the caption to his post.

Hafthor Bjornsson is tentatively scheduled to fight archrival and fellow former strongman Eddie Hall in March 2022 in a boxing match. The pair was originally scheduled to fight in September 2021. However, Hall had to pull out of the fight due to a bicep injury. This led to Hafthor Bjornsson fighting arm-wrestling ace Devon Larratt in a short notice bout. Bjronsson emerged victoriously and finished Larratt via a first-round knockout.

Advertised as the heaviest boxing match in history, Hafthor Bjornsson vs Eddie Hall is one of the most anticipated cross-over boxing matches of all time. Bjornsson has publically stated that defeating Eddie Hall is his ultimate goal in the sport of boxing. Assuming that Bjornsson is able to beat Eddie Hall and decides to try his hand in bodybuilding, it will be interesting to see how plays out.

Should Hafthor Bjornsson make a transition to bodybuilding?

Hafthor Bjornsson’s transition to boxing became an interesting affair due to the health aspect involved in it. Bjornsson’s massive weight loss from 450lbs during his days as a strongman to nearly 350lbs to compete in boxing was widely regarded as a positive change from the perspective of health and longevity.

However, another transition – to a demanding discipline like bodybuilding – is not likely to bring similar kinds of benefits. At 6ft-9in tall, Hafthor Bjornsson sits among the extremely tall people. On the other hand, bodybuilding seems to have turned out to be a short man’s sport. Testimony to the fact is the average height of Mr. Olympia winners which is somewhere at 5ft-10in. Besides, filling out a 6ft-9in tall frame proportionately for bodybuilding is a huge challenge in itself. In addition to that, the additional weight coupled with the stress of bodybuilding can potentially bring health complications associated with them.

If Hafthor Bjornsson chooses to make a transition to bodybuilding, it will certainly be an entertaining journey and something that strength sports fans would love to follow. However, Bjornsson already has a formidable legacy in strongman. Putting his body through the process of bodybuilding will probably not further it much. Besides, it is likely to have a negative impact on his health considering his tall frame and age. What do you think? Should Hafthor Bjornsson pursue bodybuilding?