With the 2023 Arnold Sports Festival nixing Women's Physique from their show, Villegas gave her thoughts on the decision: 'There is no stopping the women's physique train!' 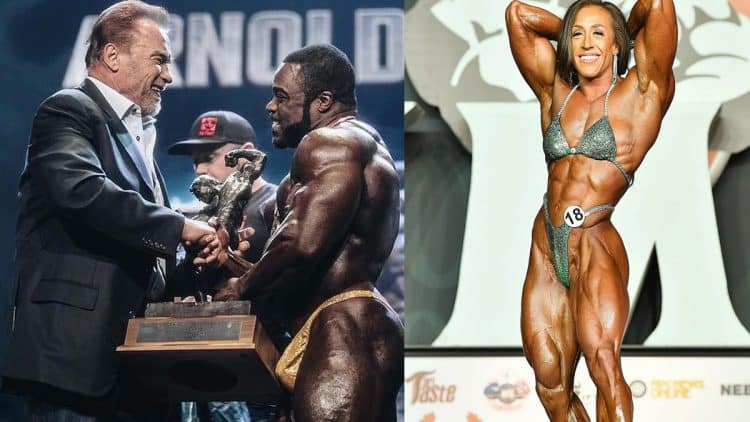 Sarah Villegas, a two-time Women’s Physique Olympia champion, has a bone to pick with bodybuilding legend Arnold Schwarzenegger. In a recent Instagram post, Villegas called out the seven-time Olympia winner for removing the Women’s Physique category from the 2023 Arnold Sports Festival next year.

For the past two years, Schwarzenegger and the company decided to remove the Women’s Physique category from the annual Arnold Sports Festival. The event which takes place every year, showcases a number of different sporting competitions. In addition to bodybuilding, the festival also hosts the Arnold Strongman competition, and most recently — slap fighting.

It’s unclear why Schwarzenegger and his company decided to remove the Women’s Physique division. From 2015-2020, Women’s Physique was a staple at the second biggest bodybuilding show of the year, behind Mr. Olympia. While a number of categories were absent from the event in 2021 and 2022, most athletes thought this was caused by the Coronavirus pandemic. However, we now know that Women’s Physique won’t be making a return next year either.

Sarah Villegas voiced her frustrations with Schwarzenegger last year after the Women’s Physique/Women’s Bodybuilding divisions were removed from the 2022 Arnold Classic. To remedy the situation, Villegas offered $20,000 of her own money to help sponsor athletes who wanted to compete in the aforementioned categories.

Villegas, who has had a considerable impact on Women’s Physique, believes notoriety behind her division has only grown as of late. She believes Women’s Physique helps make Olympia a special event and added that her division is now a part of the IFBB’s main show, Jim Manion’s Pittsburgh Pro. With 2023 Arnold Sports Festival tickets going on sale now, Villegas gave her thoughts on the Women’s Physique division being excluded from the event.

In an Instagram post published on Tuesday, a disappointed Villegas tagged Schwarzenegger after learning that Women’s Physique and Women’s Bodybuilding were once again excluded from the 2023 Arnold Sports Festival event list.

Find her full statement below:

“Once again, The Women’s Physique division has been excluded from the 2023 @arnoldsports in Columbus. I was hoping last year was a one-time exclusion, but it appears that @schwarzenegger chose to eliminate women’s physique from the Arnold Classic permanently.

Women’s physique is bigger than one show, much bigger. And that’s what the Arnold Classic has become to me, just a show. Women’s physique is one of the biggest events on the Olympia stage and is now at the IFBB Pro League’s main show, The Pittsburgh Pro.

Instead of putting out sound bites, we will just do it with actions. We, Women’s Physique, will do it bigger and better than @ArnoldSports , just like we did last weekend in Texas. There is no stopping the women’s physique train!” Sarah Villegas wrote.

After she made the post, other female bodybuilders took to the comment section to echo Sarah’s disappointment. Ten-time Ms. Olympia champion Iris Kyle said it’s unfair for women not to be afforded the same privileges as their male counterparts.

Despite reaching the top of the sport twice in her respective catergory, Villegas and any competitors from the Women’s Physique/Women’s Bodybuilding divisions won’t be afforded an opportunity to compete at the 2023 Arnold Classic.

Schwarzenegger believes bodybuilding is becoming dangerous, especially in the Men’s Open division, and mentioned that Classic Physique is the future. In today’s era, Schwarzenegger prefers the look of Classic Physique competitors as they place more importance on features like symmetry and evenly balanced proportions.

RELATED: Arnold Schwarzenegger on Changing Bodybuilding’s “Terrible Reputation”: ‘Back in My Pumping Iron Days, That Was My Goal’

As of this writing, the 2022 Mr. Olympia contest is expected to host competitors from Women’s Physique and Women’s Bodybuilding. With tickets on sale for the 2023 Arnold Classic, Sarah Villegas is disappointed that her division won’t be featured in Ohio next year.