Game of Thrones star Hafthor Björnsson had a lot to say after being called out following his boxing victory against Eddie Hall. 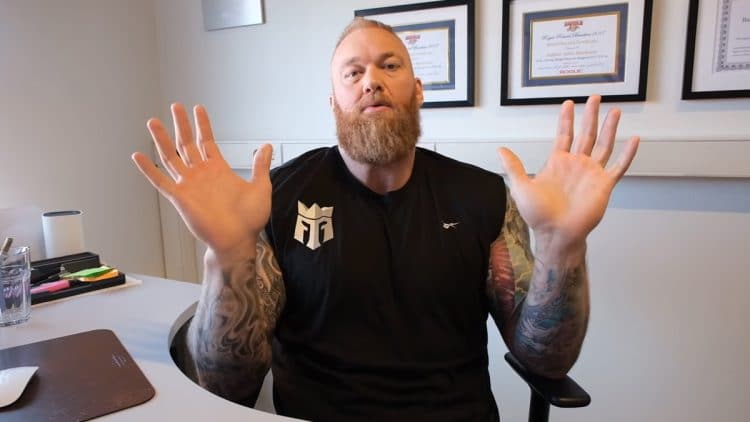 Once a Strongman, Iceland’s Hafthor Björnsson has made a successful transition into the boxing world after defeating Eddie Hall. In a recent YouTube video, Björnsson reflects on Eddie wanting the rematch while discussing the possibility of a future fight with YouTubers KSI and Logan Paul.

Tension between Thor and Hall reached a high after Eddie won the World’s Strongest Man contest in 2017. In the aftermath, Thor suggested that he was cheated out of the victory. The saga between Hafthor and Eddie continued after “The Mountain” managed to pull 501kg in 2020, setting the all-time world record. A feat which ended up being two pounds heavier than the previous record set by Hall.

After besting Eddie via unanimous decision victory, Björnsson’s name has been on the tip of many people’s tongues. As of late, Martyn Ford, who takes on The Iranian Hulk in Dubai next month, chimed in with desire to fight Thor. Weighing 320lbs, many fans have expressed interest in seeing the fight bceause the two men would be competing at similar weights. After claiming he would knock Björnsson out, Thor has responded and believes he would smash Ford if they ever met in the ring.

Following Hall’s reaction video to losing his boxing debut, Hafthor praised Eddie for his efforts. In a recent YouTube video on his channel, Hafthor thanked Eddie for opening the door for athletes like himself.

So a special thanks to Eddie. I want to also say that he’s a great athlete. There’s things he did in his career that are that a lot of people that were impossible. For example lifting 500kg back in 2016 I believe it was. Doing that then, was to many people impossible.

Even to people like myself but he because he did that, he opened a lot of doors for many people. He inspired a lot of people. He even inspired me. He made me a believer that pulling more than 500kg was possible. He opened those doors. I want to say thank you to Eddie.” Hafthor Björnsson said.

Thor admits Eddie’s previous deadlift record inspired him because before Hall’s record, pulling 500kg was considered impossible at the time.

Björnsson Addresses Bets and Fires Back After KSI Call-Out

Once the money from the fight loads into his account, Björnsson has confirmed that he and Eddie will donate $200,000 each for a total of $400,000 in charity donations.

“Let’s talk about the charity as you guys know, me and Eddie are both going to give away $200,000, $400,000 total for charity that I’m going to pick. I’ll be making a special YouTube about that when the time is right and when I have received the money from the fight. I can’t wait. I cannot wait. I feel blessed to do a very nice thing.

In addition, Thor addresses the tattoo bet and believes Eddie should have no longer than a month to get the ink. Thor cares less about the color, placement, and size, and more about Eddie being a man of his word.

Well, you lost the fight and you’re supposed to get the tattoo. I know you want to take your time and I respect that. Do it on your own time, but don’t take too long. Let’s get this done in a month at least.

While Eddie has requested a rematch, Thor maintains that it’s not the right time to run it back. According to Björnsson, once the two pick up a couple of victories in the ring, the corresponding hype will warrant a rematch. Hafthor also addressed the recent call-out from YouTube star KSI and a potential fight with Logan Paul.

“I saw KSI was calling me out a little bit. Saying that I’m slow, and this and that. I’ve heard those claims before but believe me KSI even though I’m slow I can punch you in the head quite hard. I heard some poeple say ‘oh, you should fight Logan Paul’. Even take Paul, there’s a reason for weight classes guys.” Hafthor said.

Given Thor would be nearly twice the weight of KSI if they fought, he questions the validity of a fight materializing with the British rapper. Weight classes were made for a reason, and Thor believes he would be too big for Logan Paul as well. Following his recent victory, Björnsson has plenty of time to figure out who his next opponent will be, and the options appear to be multiplying by the day.