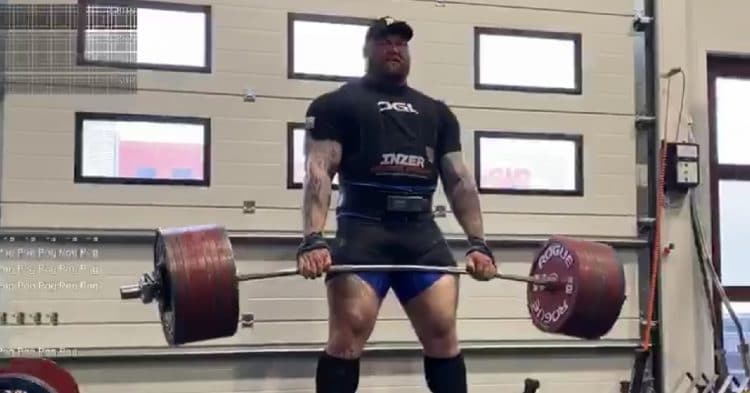 Hafthor Bjornsson is working on hitting an Earth-shattering 501kg deadlift. In the process of preparing for that, he gave fans a preview by crushing an enormous 470kg lift.

Bjornsson plans to hit this world record-setting 501kg lift next month. The original plan was to go for him to attempt it at the World’s Ultimate Strongman event, but with that not happening he was forced to improvise. As a result, he will attempt the record at his home gym, during a live stream, with an official there to verify the weights.

This is a massive goal for Thor Bjornsson to have set out in front of him. Therefore a ton of work is required for him to achieve this deadlift. He recently decided to take to Twitch to share his last heavy training session and give fans some insight into his preparation for the lift.

To start off the session, Bjornsson hits a warm-up set of five reps, before increasing the weight and going to three reps. After that, he continues the warm-up with a 220kg double, and 270kg single, hitting both with ease. He continues to go up from there, hitting 360kg, then 400kg and finally 440kg.

Then it was finally time for the 470kg attempt. They explain that while this is not an all-time personal record, it is his heaviest lift on this type of bar. So with a scream of excitement, he takes on the weight, pulling it smoothly. Following this, he vows that he will hit the 501kg lift on May 2nd, saying that he could hit it today if he wanted to.

Thor Bjornsson has been met with some backlash for his lift, with some even saying he may not hit the 501kg. Regardless of what you think of the circumstances of the lift, there is no denying that he has been doing a ton of work to prepare for this moment.